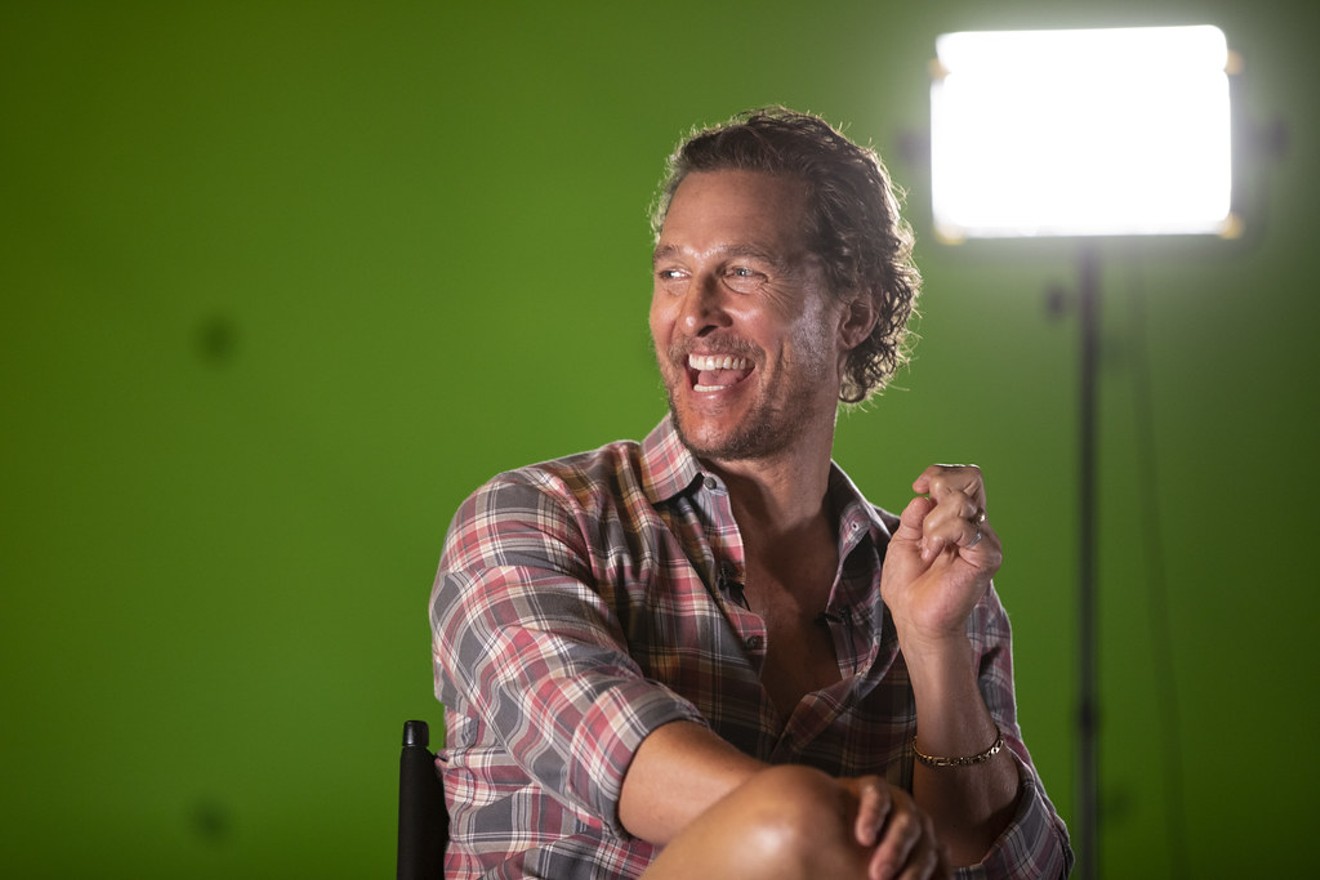 That's future Gov. Matthew McConaughey to you. "Matthew McConaughey and Scott Rice host conversation with film director and screenwriter Jeff Nichols." by UT Moody College of Communication is licensed under CC BY-SA 2.0
Texas’ sweetheart, actor Matthew McConaughey, isn’t a politician in real life and he hasn’t played one on TV. But he got the internet talking when he announced earlier this month he’s flirted with the idea of taking on a new role: Texas governor.

In an interview, conservative talk-show host Hugh Hewitt asked McConaughey whether he’d ever consider a bid for the governor’s mansion when it’s up for grabs in 2022. (Republican Gov. Greg Abbott will be running for a third term.)

“I mean, that wouldn’t be up to me. It would be up to the people more than it would me,” McConaughey said. “I would say this. Look, politics seems to be a broken business to me right now. And when politics redefines its purpose, I could be a hell of a lot more interested.”

McConaughey later qualified his answer a bit on The Late Show With Stephen Colbert, telling the host he has “no plans to do that right now.”

Right now, huh? So you’re telling us there’s a chance.

Regardless of the timeline, McConaughey opened Pandora’s box when he let slip those comments, so the Observer reached out to a political science expert to see whether he’d have a shot. And he does.

Professor Matthew Eshbaugh-Soha, chair of the political science department at the University of North Texas, said McConaughey was wise to float the idea this early on to gauge how people would react. That way, the actor knows whether he should invest in a serious run.

An admittedly rudimentary survey by this writer indicates McConaughey would have a solid chance — at least among Dallas-area residents. Of the 69 people who responded to the Facebook survey, 53 said they’d vote for McConaughey if he ran for Texas governor. That’s 76% in a totally unrepresentative sampling with a margin of error of lord knows. 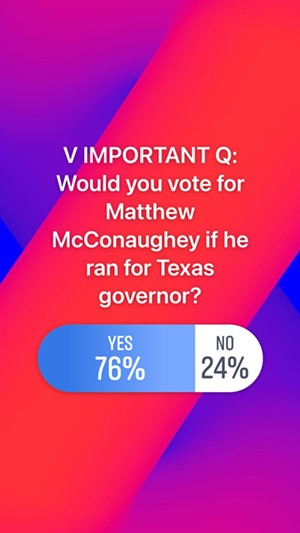 More than three-quarters of Dallas voters say they'd cast their ballot for McConaughey.
Simone Carter
As this past election proves, Texas is still a conservative stronghold, so if McConaughey were to run, Eshbaugh-Soha said it’d have to be as a Republican.

“I think if it came down to it, if I’m a Democrat and McConaughey’s my choice, I’m going to vote for him over the Republican,” Eshbaugh-Soha said.

“Just imagine if he runs as a Democrat,” he continued. “The Republican side is simply going to say, ‘Here’s this Hollywood liberal —.’ End of story, right?”

So far, McConaughey has been tight-lipped about his political preferences, opting to cast himself as center-of-the-road. That’s a good philosophy to pull off during partisan times, Eshbaugh-Soha said.

“He might think, ‘Geez, if Trump can do this, I can do it. I can act, and I can act better than he can.'” – Professor Matthew Eshbaugh-Soha

President Donald Trump won over some of his predecessor’s Democratic supporters in states like Wisconsin, Michigan, Ohio and Pennsylvania, Eshbaugh-Soha added. If McConaughey took on a similar strategy, he could appeal to moderate Texas Latino voters.

McConaughey himself isn’t the most consistent voter. The Dallas Morning News reported he’s only cast his ballot twice since he registered in Austin in 2012, in the 2018 and 2020 general elections.

Singer-songwriter and novelist Kinky Friedman once made a serious run for Texas governor as an Independent in 2006 but won 12.4% of the vote, losing to Republican Rick Perry, according to political website Ballotpedia.

Yet McConaughey’s celebrity could outshine his inexperience, Eshbaugh-Soha said. Actor Arnold Schwarzenegger won his bid for California governor in 2003 and a reality star businessman secured the White House in 2016.

The latter example could have inspired McConaughey to consider a career change himself, Eshbaugh-Soha said.

“He might think, ‘Geez, if Trump can do this, I can do it. I can act, and I can act better than he can,’” Eshbaugh-Soha said.

Still, being governor isn’t easy by any means, Eshbaugh-Soha said. In good times, the actor could “fake it,” but if there were a crisis — say a pandemic, for example — he’d need to have more than good looks to fall back on.

Although he's still undecided as to whether he'll actually run, if McConaughey's likability factor holds, the man could actually beat Abbott, by God.

All right, all right, all right.
KEEP THE DALLAS OBSERVER FREE... Since we started the Dallas Observer, it has been defined as the free, independent voice of Dallas, and we'd like to keep it that way. With local media under siege, it's more important than ever for us to rally support behind funding our local journalism. You can help by participating in our "I Support" program, allowing us to keep offering readers access to our incisive coverage of local news, food and culture with no paywalls.
Make a one-time donation today for as little as $1.