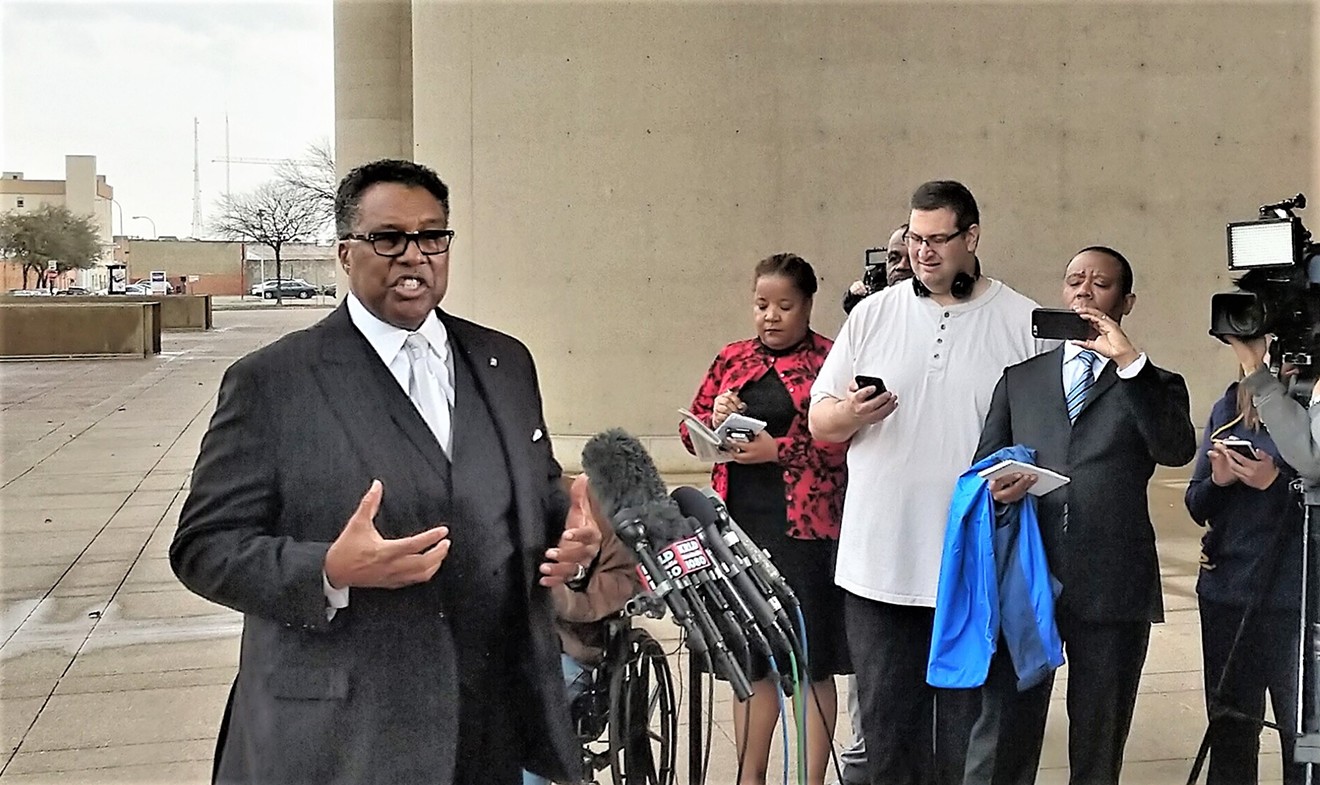 Dallas City Council member Dwaine Caraway asked the National Rifle Association to cancel its convention in Dallas, but he also said he keeps a gun in every room of his house. Stephen Young

After Dallas Mayor Pro Tem Dwayne Caraway’s recent press conference telling the National Rifle Association to go home, a new petition is urging city officials to revoke the funds it put toward the NRA’s annual conference in May.

Dallas resident Jonathan Herzog started the petition when he realized that city officials had given the NRA more than $400,000 in free rent, according to a Dallas Morning News report. More than 34,000 people have signed it in three days.

“I started the Care2 petition because too many times I've been shook to the core by these mass shootings in our country," he says. "Too many times it has left me with thoughts of anger, depression and hopelessness. The hopelessness comes from the impression that no matter how hard we try, nothing will change. Nothing will change as long as the NRA has our lawmakers in its pockets.

"But thankfully, I no longer feel hopeless," he says. "People are speaking out now more than ever. The opportunity for change is real. I want to help make a change, and this petition is a part of that. The courageous students who experienced the horrors of the Florida attack have come forward, challenging the NRA and the politicians it controls. These students have empowered many, including myself.

"The time is now to do everything we can to promote progress and demand change. That includes making sure Dallas isn't giving taxpayer money to groups that keep insufficient gun laws in place. Mass shootings have become commonplace. The NRA is partially responsible. It is the biggest obstacle standing in the way of improving the status quo. Dallas shouldn't welcome them."

Herzog pointed out that city officials gave the NRA a $22,000 discount, and VisitDallas, the city’s tourism bureau, funded the other $387,000 of the rent price. He mentioned that Caraway told the NRA not to come to the city, as the Dallas Observer reported last week.

"It is a tough call when you ask the NRA to reconsider coming to Dallas, but it is putting our citizens first," Caraway said. "Who needs an AR-15 to go hunting? Who needs an AR-15 to protect their house? They talk about mental illness. Yes, mental illness is an issue, but it's not just an issue that should only be associated with guns. At the end of the day, we need to connect the dots. The NRA needs to step up to the plate and show leadership. Elected officials are receiving dollars from the NRA, and they're afraid to set policy and to set necessary gun rules."

The NRA repeated the same argument it's given after each of the 34 mass shootings that have occurred since the assault weapons ban expired in 2004, according to a Feb. 16 report by The Statistics Portal.

“The shameful politicization of tragedy — it’s a classic strategy, right out of the playbook of a poisonous movement," Wayne LaPierre, executive vice president of the NRA, told the Conservative Political Action Conference last week in Maryland. “They hate the NRA. They hate the Second Amendment. They hate individual freedom.”

LaPierre claimed “the socialists” are coming.

NRA spokeswoman Dana Loesch also appeared at the CPAC and aimed her comments toward members of the media standing in the back.

“Many in legacy media love mass shootings,” she said and received a standing ovation. “I’m not saying you love the tragedy, but you love the ratings. Crying white mothers are ratings gold.”


According to The Statistics Portal, mass shootings dropped by 37 percent during the assault weapons ban and rose 183 percent after President George W. Bush allowed it to expire.

"Among other things, the NRA has come out against raising the minimum age to buy a rifle," Herzog says. "It is disgraceful. How can someone be too young to drink a beer but old enough to buy a semiautomatic weapon with 100-round magazines?"

Several companies around the country began pulling perks, such as discounts for flights, hotel rooms and insurance, away from the NRA and its members. Some of those companies included Metlife, Best Western hotels and Enterprise Holdings.

After this month's mass shooting, President Donald Trump mentioned regulating bump stocks, raising the age to purchase an assault rifle (or sporting rifle, depending on who’s wielding it) from 18 to 21 and strengthening background checks, which wouldn’t have prevented the 19-year-old Florida high school shooter from purchasing his weapon.

LaPierre and Trump also called for “hardening schools” and arming certain teachers, but many teachers are resisting that call. Randi Weingarten, the president of the American Federation of Teachers, reaffirmed this fact in a telephone town hall with 60,000 teachers, some of whom are gun owners, Wednesday night, and released a statement:

“We don’t want to be, and would never have the expertise needed to be, sharpshooters; no amount of training can prepare an armed teacher to go up against an AR-15. How would arming teachers even work? Would kindergarten teachers be carrying guns in holsters? Is every classroom now going to have a gun closet? Will it be locked? When you have seconds to act when you hear the code for an active shooter, is a teacher supposed to use those seconds getting her gun instead of getting her students to safety? Anyone who pushes arming teachers don’t understand teachers and doesn’t understand our schools. Adding more guns to schools create an illusion of safety, but in reality it would make our classrooms less safe."


On the Care2 petition webpage, Herzog wrote that after a mass shooting, gun sales in the country spike, not because of the mass shooting but because of gun control talk that always follows. People fear that the government will ban their AR rifles.

“Let it be known, right after a mass shooting, NRA donations spike,” he wrote. “That means the NRA has strong financial incentive to not prevent mass shootings. This can't go on. It's time to stand up to those who will do nothing to prevent such atrocities. I want the city to do what's right and take back the funding so the NRA doesn’t come.”