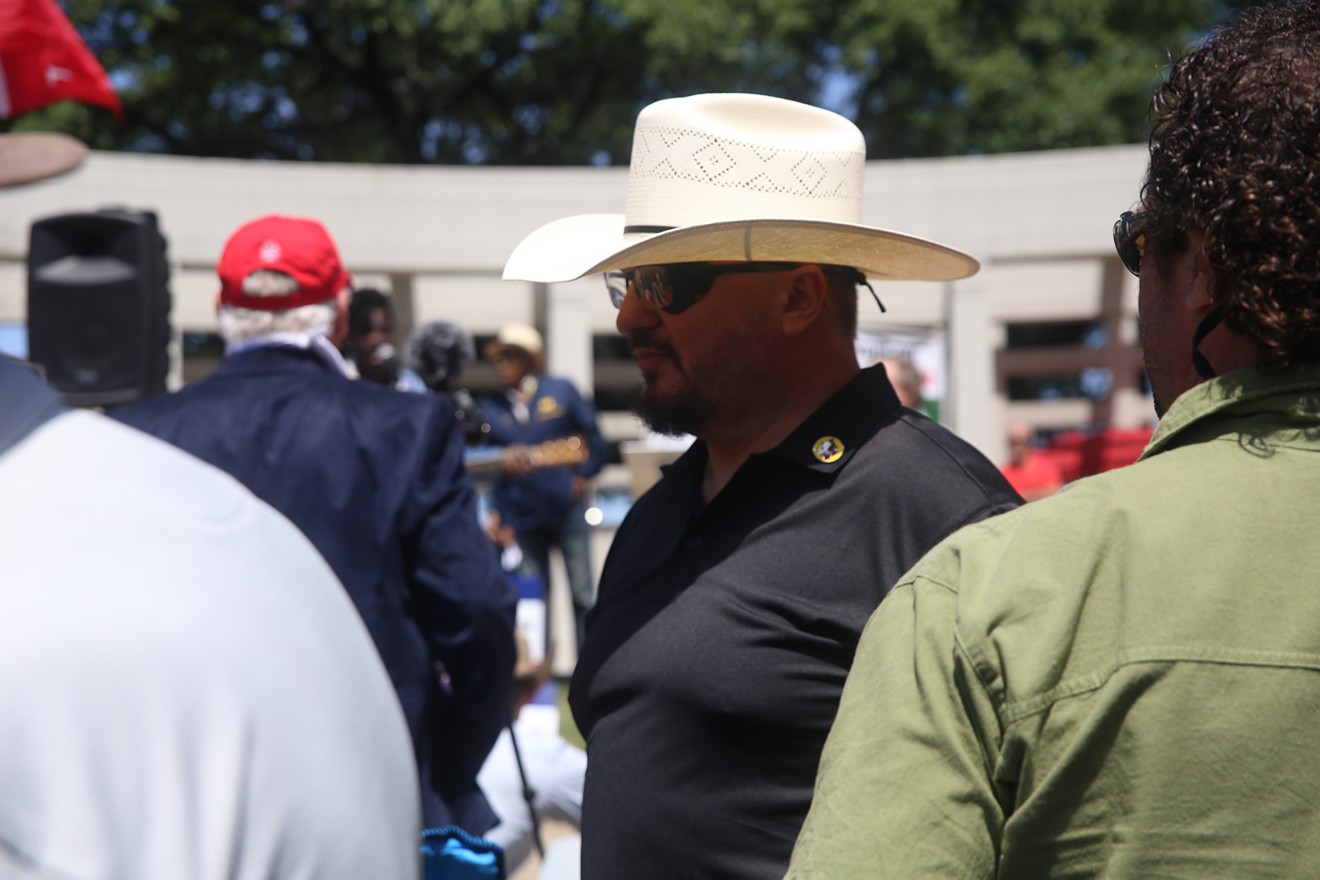 Stewart Rhodes is the founder of the Oath Keepers, a far-right militia and anti-government group. Jacob Vaughn
Only a few days after Joe Biden's victory in the November 2020 presidential election, Oath Keepers militia founder Elmer Stewart Rhodes was already on InfoWars warning that the "deep state" was trying to "illegitimately" remove then-President Donald Trump.

Rhodes laid out his militia’s plans in an interview with host Alex Jones, a longtime conspiracy theorist, at an upcoming rally. If Rhodes and his people had anything to do with it, Trump wouldn’t be leaving the Oval Office at all.

Militiamen were already “stationed outside D.C. as a nuclear option,” Rhodes explained. “In case they attempt to remove the president illegally, we will step in and stop it.” His men were in D.C. and outside the city, “armed and prepared to go in if the president calls us up,” he added.

On Jan. 6, after supporters attended Trump’s so-called “Stop the Steal” rally in D.C., the Oath Keepers sprang into action. Not long after Trump urged protesters to “fight like hell,” the militiamen joined a pro-Trump mob that stormed the U.S. Capitol in a failed attempt to prevent the certification of Biden’s electoral victory.

On Tuesday, jury selection started in the federal trial of Rhodes, who is a resident of Granbury, and four other Oath Keepers accused of seditious conspiracy and other charges, including deadly assault. At a hearing earlier this month, prosecutor Jeffrey Nestler said the five had been grouped together because they served as "top lieutenants" in the militia.

The charges could carry a sentence of up to two decades in prison. Three of the 11 Oath Keepers charged with seditious conspiracy have already pleaded guilty.

Historically, seditious conspiracy charges have been hard to prove. In 2010, prosecutors charged members of the far-right, Christian militia known as Hutaree with seditious conspiracy. The following year, a judge tossed out the charges, saying the government’s evidence was insufficient. In fact, federal prosecutors hadn’t successfully prosecuted a seditious conspiracy case since 1995, when 10 Islamist militants were convicted after they’d plotted to blow up several buildings in New York City, including the United Nations.

But Alan Rozenshtein, an associate professor of law at the University of Minnesota Law School, pushed back on the idea that seditious conspiracy might be too difficult to prove in Rhodes' case. "If the alleged conduct is true, this is the textbook seditious conspiracy," he said.

"Here the alleged conduct, which is plotting to use force to prevent the certification by the Electoral College, is not hard to prove," added Rozenshtein. "That is literally what the statute is for."

Rhodes, who reportedly lost sight in his left eye when a handgun he dropped went off, graduated from Yale Law School in 2004. At one point, he worked as an aide to Ron Paul, the libertarian and former U.S. congressman from Texas. He founded the Oath Keepers in 2009, not long after the country elected its first Black president, Barack Obama.

Over the years, the group’s membership swelled as it plucked new recruits from the military and law enforcement. By 2014, Rhodes claimed, their numbers had hit 35,000, although experts estimated that its membership was far smaller at the time.

From the start, conspiracy theories fueled the militia.

In 2014, Oath Keepers joined a now-infamous armed standoff at a ranch in Bunkerville, Nevada. There, they showed up armed in support of Cliven Bundy, a cattle rancher who allegedly owed more than $1 million in grazing fees for using federal lands near his property.

Ever engulfed in paranoia, Rhodes and others reportedly believed the U.S. government was plotting a drone strike on the area, and the leader yanked his men from what he called “the kill zone.” The move prompted controversy among Bundy supporters, some of whom were later filmed discussing whether to shoot and kill Rhodes and his men for “desertion” and “cowardice.” In the end, they voted to ban the Oath Keepers from the property.

"While these groups claim all these stances against the government, in reality they're anti-democratic governments." – Rachel Carroll Rivas, Southern Poverty Law Center

In 2015, Rhodes lost his license to practice law when the Montana Supreme Court disbarred him for not responding to bar complaints in a federal district court in Arizona.

Today, the Southern Poverty Law Center (SPLC), an Alabama-based watchdog, describes the Oath Keepers as “one of the country’s largest far-right antigovernment groups.” And although the militia movement has picked one fight after another with the federal government, the Oath Keepers eventually found a politician they could get behind. When Trump took over the White House, Rhodes and his militiamen lined up behind him.

The militiamen showed up as “volunteer security” at Trump’s January 2017 inauguration, came out to back the Republican president at one rally after another throughout his four years in office and vowed to dispatch armed men to voting polls ahead of the November 2020 elections.

"While these groups claim all these [stances] against the government, in reality they're anti-democratic governments," said Rachel Carroll Rivas, the interim deputy director of research at the SPLC’s Intelligence Project. "A lot of people want to believe that some of these folks might just be bombastic, full of hot air, but what Jan. 6 proved is that isn't just what they are."

When the Capitol riot happened, the Oath Keepers felt "called to act," added Carroll Rivas. "This is the mission of most of this movement."

Rhodes eventually delivered on his promises to go to battle for Trump, according to federal prosecutors. Ahead of the Electoral College vote on Jan. 6, 2021, Oath Keepers allegedly transported weapons and ammunition to a stash house in the D.C. area.

When the riot broke out, hundreds rallied outside the Capitol building. Some attacked police officers outside. Many of those who made it inside wandered throughout the building, doing a reported $1.5 million in vandalism.

Rhodes stayed outside the building, prosecutors say, but video footage from the day shows other Oath Keepers, dressed in military-like garb, forming a column and pushing their way inside.

In court filings, two of Rhodes' attorneys, James Lee Bright and Phillip Linder, have argued that Rhodes and his militiamen had come in tactical gear to protect themselves against anti-fascists. Neither attorney replied to the Observer's request for comment.

Meanwhile, federal authorities have thus far charged more than 900 people around the country in connection with the Capitol riot. Of that total, some 396 have entered guilty pleas.

According to the FBI’s Dallas office, more than 40 North Texans have been arrested on charges related to the Capitol riot. On Monday, Daniel Caldwell, a 51-year-old resident of The Colony, pleaded guilty to assaulting, resisting, or impeding officers using a dangerous weapon. The Department of Justice says Caldwell pepper sprayed police officers during the riot. He could face up to 20 years in prison.

Still, the Oath Keepers continue to command an influential presence on the far right. Late last year, the nonprofit group Distributed Denial of Secrets published some 38,000 names on Oath Keepers membership lists. Texas had the most members, with more than 3,300, including several in law enforcement, the Anti-Defamation League found in an analysis of the membership rolls.

Although the Jan. 6 prosecutions and negative publicity could take a toll on the Oath Keepers, Shane Burley, author of Fascism Today and Why We Fight, doubts "it will be a nail in the coffin" for the militia.

"They have lasting power where other organizations don't because they were able to transcend certain barriers," he said. "They've been really good at recruitment, but also the GOP has moved into a space the Oath Keepers already occupied."
KEEP THE DALLAS OBSERVER FREE... Since we started the Dallas Observer, it has been defined as the free, independent voice of Dallas, and we'd like to keep it that way. With local media under siege, it's more important than ever for us to rally support behind funding our local journalism. You can help by participating in our "I Support" program, allowing us to keep offering readers access to our incisive coverage of local news, food and culture with no paywalls.
Make a one-time donation today for as little as $1.