Even in a Pandemic, Americans Split on Federal Role in Health Care

Monday, the Pew Research Center released a poll showing that 85% of Democrats think the federal government should play a large role in ensuring health care access for Americans. For Republicans, the figure was 42%.

Although a sizeable difference, it’s not a surprising one, said professor Matthew Eshbaugh-Soha, chair of the political science department at the University of North Texas.

“Democrats tend to favor the federal government and Republicans tend to like state and local [government], or so they say,” he said. 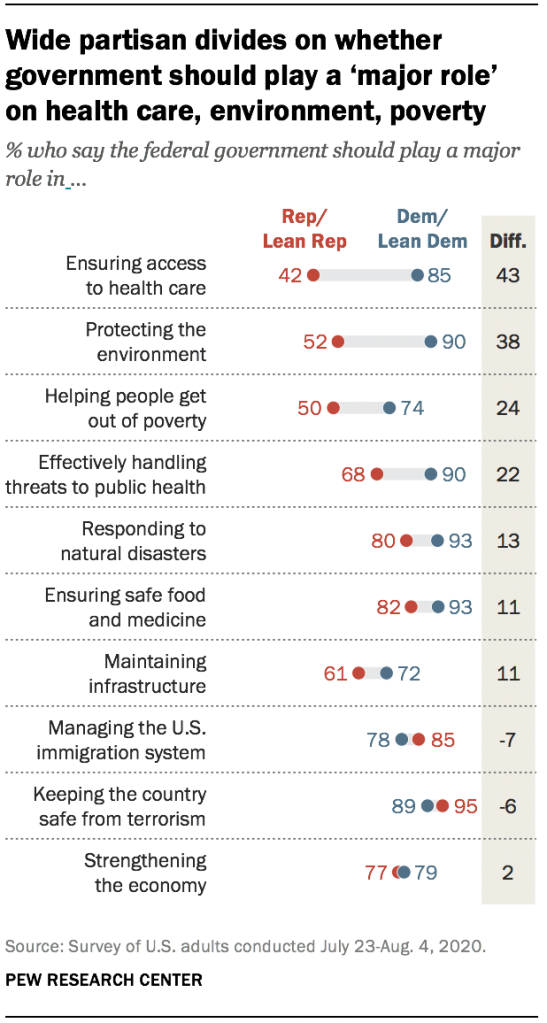 In recent years, political science experts have noticed that ideologies on both sides of the spectrum have become more extreme. The pandemic has exacerbated views on everything from the economy to schools to masks, and even as the nation nears 200,000 COVID-19 deaths, neither side can seem to agree on health care.


President Donald Trump’s laissez-faire attitude toward health care and the pandemic will encourage his followers to feel similarly, Eshbaugh-Soha said.

“Trump is kind of the center of the political universe, and what he says is going to be supported by Republicans and rejected by Democrats,” he said.

In 2010, then-President Barack Obama signed the Affordable Care Act. Most Republicans have opposed the measure on ideological grounds from the start.

Trump has long attacked the ACA, nicknamed “Obamacare.” In 2017, his administration failed to repeal and replace it, even with a Republican majority in both houses of Congress.

This June, Trump tried again, joining Texas Attorney General Ken Paxton and other Republican leaders in petitioning the U.S. Supreme Court to repeal it, according to the medical journal American Journal of Managed Care.

Meanwhile, The New York Times reported that Texas leads the country in new coronavirus infection rates. It also ranks highest in the number of uninsured people, according to The Texas Tribune.

If the ACA were repealed, around 2 million Texans would lose their health care coverage, according to the Center for American Progress. Still, the only way that could happen is if Republicans win big in November's election, said Cal Jillson, a political science professor at Southern Methodist University.

Even then, he said, it’s unlikely. Over time, public opinion has shifted to favor Obamacare, he said.

“I think that you’re going to have Democratic control at the national level enhanced, if not complete, after the 2020 elections,” Jillson said. “Then I think there’s no chance to repeal Obamacare.”

“If you’re talking about this being a highly polarized issue come and go Election Day, that’s not going to be the end of it. We’re just kind of warming up here.” - Thomas Marshall, UT-Arlington

Shortly after she secured the Democratic nomination for U.S. Senate in July, MJ Hegar told the Observer that health care is the most important issue to her. Even before the pandemic, 1 in 5 Texans were uninsured, she said.

Hegar added that her competitor, Sen. John Cornyn, has only widened the health care divide. He’s voted 20 times to defund or repeal the ACA, The Hill reported.

Cornyn reversed course in May when he encouraged Texans to sign up for Obamacare if they lost their health insurance because of job loss in the pandemic.

“People are just tired of politicians politicizing our lives and making decisions that end up getting people killed, so that they can get reelected,” Hegar told the Observer.

Opinions of health care haven’t always been so discordant, said Thomas Marshall, a political science professor at the University of Texas at Arlington. Health care wasn't a partisan issue until the 1990s, when then-presidential candidate Bill Clinton lobbied for universal health care coverage for all Americans.

Since then, the issue has become increasingly divisive, Marshall said. The passage of the ACA irked many Republicans because of their distaste for Obama in general, he said.

Other issues are contentious, too, such as opinions on climate change and racial justice, Marshall added. The debate over health care access will likely get more heated as time goes on, he said.

“If you’re talking about this being a highly polarized issue come and go Election Day, that’s not going to be the end of it,” Marshall said. “We’re just kind of warming up here.”
KEEP THE DALLAS OBSERVER FREE... Since we started the Dallas Observer, it has been defined as the free, independent voice of Dallas, and we'd like to keep it that way. With local media under siege, it's more important than ever for us to rally support behind funding our local journalism. You can help by participating in our "I Support" program, allowing us to keep offering readers access to our incisive coverage of local news, food and culture with no paywalls.
Make a one-time donation today for as little as $1.