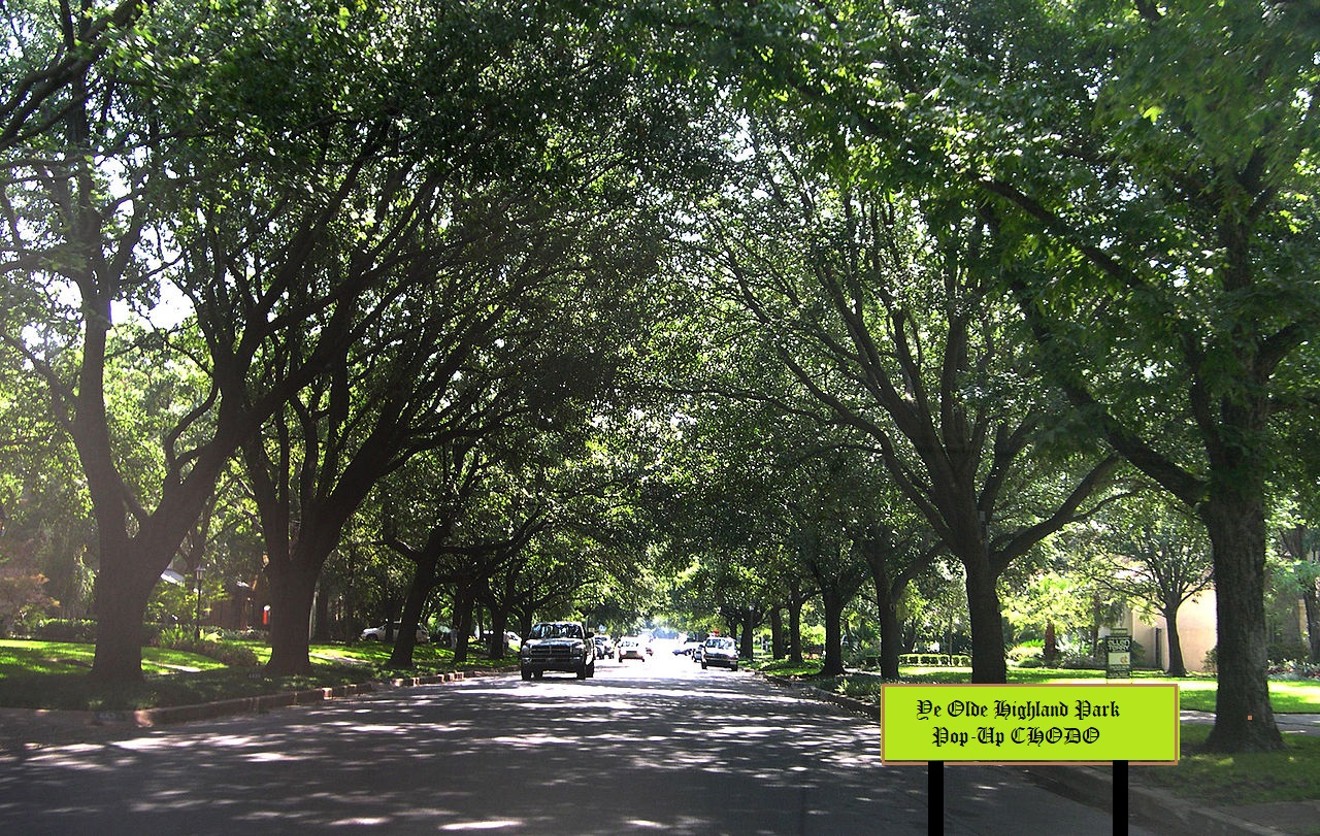 By federal law, Highland Park is the perfect place for the the next community housing development corporation. apologies to Ansem27 at English Wikipedia
Sometimes, Dallas City Council member Philip Kingston is just flat brilliant. When? I don’t know. But sometimes he is. Yesterday, he gave me an idea that I think may be the kernel of an important national story about the U.S. Department of Housing and Urban Development, although it starts very close to home.

Let me go to the bottom line first. We need to start right away identifying the civic-minded volunteers who will form the very first Highland Park CHODO.

I have been writing about CHODOs in Dallas because the HUD Office of Inspector General has been looking into CHODOs here, particularly into something I am told the OIG investigators have taken to calling “pop-up CHODOs.” A pop-up CHODO is basically a fake one created by city officials so they can hand out HUD grant money to people they like.

We could take all day. Maybe we should. Certainly we will someday, when I’m sure everybody is celebrating something wonderful and nobody’s going to read me anyway. Pop-up CHODO Explanation Day.

No, you’re right, we should pause at least long enough to answer the question: Why would city officials want to give away money to a fake group? I’m sorry. It’s like when is Kingston brilliant. I do not know. I just know it happens.


"Based on the CHDOs' track record, they are not able to demonstrate to investors an ability to deliver projects of scale on schedule and on budget." — Dallas city staff

What Kingston called me to observe is that CHODOs no longer have a legitimate reason for being. The Supreme Court has ruled that any government policy that has the effect of increasing racial segregation is illegal, whether or not segregation was the intended outcome. That rule has been sharpened here by a voluntary agreement, spurred by litigation, by which Dallas has promised HUD it will not put anymore subsidized housing in neighborhoods that already have some.

But those are the only neighborhoods that have CHODOs. Until the voluntary compliance agreement with HUD in 2014, followed the next year by the Supreme Court ruling, everybody assumed that poor and segregated neighborhoods were exactly the places CHODOs were intended to go. HUD defines a CHODO as “a private nonprofit, community-based, service organization that has, or intends to obtain, staff with the capacity to develop affordable housing for the community it serves.”

So serve whom, right? Poor and segregated areas, one would think. The thinking, in fact, was that people in an economically deprived area would know better than anyone else what they need, what it should be, where it should go and so on.

In practice — and Dallas has been practicing for a long time — all of that thinking turns out to be dead wrong. People who are not developers do not know how to do real estate development. Dumping business-investment-sized amounts of cash on people who are not businesspeople is a setup for mishap and tragedy.

Anyway, people are sort of totally missing the real point of what Dallas has learned in all of this about subsidized housing. The Supreme Court ruling and the voluntary compliance agreement both recognize a failure of historic proportion in liberal thinking: Putting nice houses in a bad area does not help anybody.

All we’re doing then is providing a form of bait to keep people trapped in a bad area — bad schools, high crime, no jobs, the whole bad nine yards. We’ve known this since Brown vs. Board of Education in 1954.

Victims of segregation are not aided by better segregation. Their destinies are improved by desegregation, which means assimilation into the mainstream culture and economy.

I think we all get where the good intentions were in the CHODO deal, but it’s beyond high time to stop and recognize the ill effects.

The new regime at City Hall under City Manager T.C. Broadnax makes exactly that recognition of reality and is seeking to carry it into policy and reality on the ground. At the most recent City Council committee hearing on proposed new housing policy, the city manager’s staff took the CHODO challenge head-on:

“The Community Housing Development Organizations (CHDOs) recommended the creation of an equity fund of $50 million to be set aside for them,” a staff briefing paper said.

“Staff cannot support this because: 1) the funding would have to be raised from investors 2) the development patterns of the CHDOs must change in order to comply with the City’s affirmatively furthering fair housing plan so that they are not concentrating low income families in low income areas 3) based on the CHDOs' track record, they are not able to demonstrate to investors an ability to deliver projects of scale on schedule and on budget and therefore they would not be able to provide an equity fund the returns required to the investors.”

We have known since 1954 that there is no such thing as better segregation.
John Vachon for U.S. Farm Security Administration
The staff is telling the council here that the city can’t just hand $50 million in HUD money to the CHODOS. The thing the staff doesn’t say plainly is that before the CHODOs can even ask for more HUD money, they’re going to have to come up with the missing paperwork to explain where the last several hundred million dollars or so went.

So if the CHODOs want $50 million, they will have to go out into the market like anybody else and raise it, and given the track record of missing books, they’re not going to raise squat.

But even more important is the Broadnax staff’s language about “not concentrating low income families in low income areas.” That’s really the kernel of this entire issue, and I would argue it’s at the center of things at the national level, too.

HUD seems to be mired in some kind of stasis. Gee, I wonder why. Let’s leave that whole deal for another day to unravel — maybe Pop-up CHODO Explanation Day.

Here is where Kingston has got it nailed: The stated purpose and legally stipulated structure of CHODOs is that they are tied to and spring from the neighborhoods where HUD money is to be spent creating housing. Those neighborhoods can no longer be poor, segregated areas where a lot of subsidized housing is already in place.

So in fact, all of the southern Dallas CHODOs need to be folded tomorrow. And, ahem, that needs to happen before anybody gets their hands on $50 million.

Kingston makes an even more compelling point. Leaving the southern Dallas CHODOs in place sends a deceptive message and sets people up for cruel disappointment.

“I have no doubt that the primary motivation [of people in the CHODOs] is to do the right thing,” he says, “but I don’t think it’s possible for them to do the right thing. Every point in this story has the feds encouraging false expectations in conflict with the legal requirements.”

Aha. Now we come to my favorite part: the first Highland Park CHODO. (I should probably tell you that Kingston just said CHODOs should be in affluent areas. Highland Park was my idea. Bet you couldn't guess.)

Places where schools are good. Where there is work to be had. Where kids are spared from pressure to join gangs. It doesn’t have to mean white places.

Doesn’t it make sense to you? If we are going to expend billions of tax dollars every year in this country with the stated purpose of ending segregation and improving lives, then why would we not spend that money moving people into places where they can assimilate into mainstream society?


"Every point in this story has the feds encouraging false expectations in conflict with the legal requirements.” — Philip Kingston

Look, we can always just get rid of CHODOs entirely. While we’re at it, we might want to think about doing away with HUD entirely. How did we ever get a $50 billion-a-year federal agency created for the purpose of eliminating residential segregation that spent all its time and money for decades reinforcing residential segregation until the Supreme Court told it to stop?

Did the Supreme Court ever have to tell the Defense Department to stop working for Vladimir Putin? Don’t answer that question.

We lack space here and also possibly competence to solve every single one of the world’s problems, so let’s cut back to Kingston’s original idea. If CHODOs by law are supposed to improve neighborhoods by creating subsidized housing, and if it is the wisdom of the law that we improve things when we put subsidized housing in “high opportunity areas,” then that’s exactly where we need a CHODO. Highland Park.

Also by law, the Highland Park CHODO needs to be drawn from and organized in Highland Park, on the theory that no one knows better where subsidized housing should go in Highland Park than Highland Park people. And speaking quite seriously, I am confident there are people in the Park Cities who will step up to this challenge.

Therefore, I volunteer my own modest services. If you are interested, please write to me at [email protected], and I will do what I can to help get things going. It would be sort of a dream come true for me. And thank you, Philip Kingston.