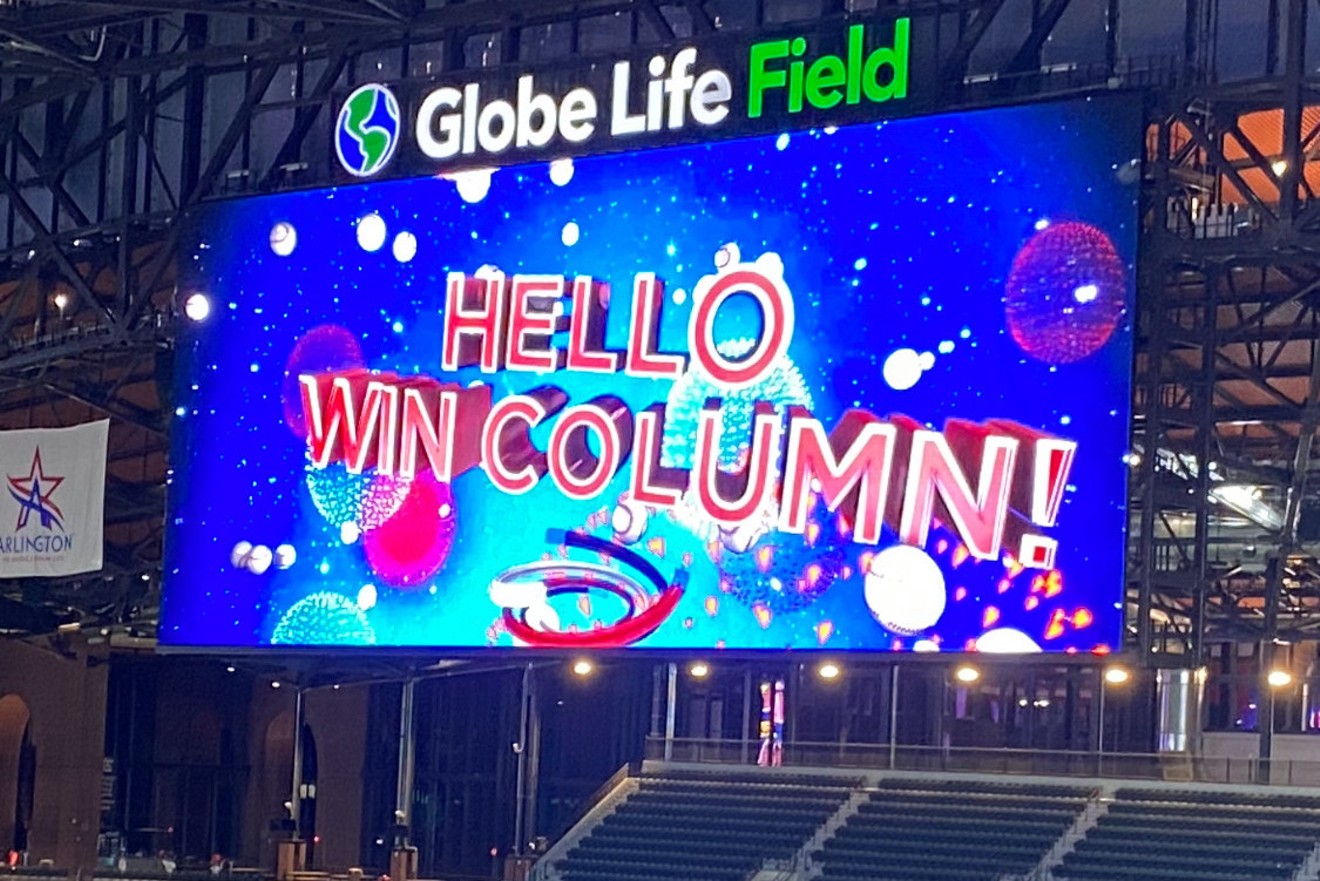 One out of three isn't good for the Rangers' shortened season in their new home. Richie Whitt
Quiet: The stands.

After $1.2 billion in construction, a four-month delay courtesy of COVID-19 and the hype of Major League Baseball’s 60-game sprint of a schedule, Texas Rangers baseball was back in Arlington over the weekend. But after christening new Globe Life Field with masks, social distancing, two losses in three games, only five runs scored in 26 innings and aggregate attendance of exactly zero, maybe we should have waited a little longer.
Without fans — or an offense — this might turn out to be a long (short) season.

My Top 10 takeaways from a sterile 2020 debut that reminded Rangers fans that different isn’t always better.

10. No Kneeling
During Friday’s Opening Day batting practice, several Rangers wore “Black Lives Matter” T-shirts. Some kneeled in protest of police brutality and systemic racism just before the pre-game National Anthem. But once Charley Pride belted out “Oh say can you see … ” every Ranger was standing, hat or hand over heart. The only player kneeling in solidarity with the BLM movement was Colorado Rockies’ veteran outfielder Matt Kemp. Shouldn’t be that surprising that MLB isn’t exactly awash with BLM. Of the 882 players on Opening Day rosters, only 68 were Black.

9. Covid, Cardboard, Cavernous
I’ve been to all three Rangers’ new home debuts and this one was by far the eeriest. Surreal, even. Media members were required to sign a three-page COVID-19 waiver acknowledging the potential presence and risks of coronavirus in the stadium. We sat 6 feet apart in the press box, wearing masks and staring blankly at 40,000 empty seats. OK, not all were vacant. Some were filled by “DoppelRangers”, cardboard cutouts of Rangers fans, a bloody Nolan Ryan, Dallas Stars’ forward Jamie Benn, former President George W. Bush, Gov. Greg Abbott and a couple of dogs wearing team jerseys. In this season of bizarro baseball, spitting is prohibited. First baseman Todd Frazier walked to the plate to Frank Sinatra and wore a mask in the field. Fourteen players and a dozen umpires opted out of playing the season, and the Toronto Blue Jays were banned from playing in Canada, banished to Buffalo. Don’t get me wrong, having baseball back was a welcomed reunion with an old friend and Globe Life Field is aesthetically breathtaking. But sans fans, it was creepy quiet and oozing sensory overload from the blinking neon and domineering video boards. At times it felt more like a soundcheck for an upcoming concert festival than a baseball game. “If you build it, they will come.” Unless, of course, they aren’t allowed. Attendance at the Rangers’ stadium debuts:
April 21, 1972, Arlington Stadium: 20,105
April 11, 1994, Ballpark in Arlington: 46,056
July 24, 2020, Globe Life Field: 0

8. Wonderful or Weird
To some, the fact that the roof was closed and the temperature was 72 degrees inside (and 91 outside) was all that mattered. To others, the artificial turf that looked perfectly vacuumed and the fake fans were an affront to our national pastime. How quiet and sanitized was the ambiance? From the press box, which is the upper-most deck, just to the first-base side of home plate, we could clearly hear Rangers’ centerfielder Danny Santana calling off his teammates to catch a towering pop-up. In the ninth inning of Friday’s 1-0 nail-biter, closer Jose Leclerc wiggled out of trouble to secure the win. After the final out, the scoreboard flashed former radio voice Mark Holtz’s signature “Hello, Win Column!” The soundtrack, however, was about as frenetic as butterflies exchanging sign language in a snow-covered cotton field. Fake grass is the tradeoff for a roof and air conditioning. Fair enough?
Richie Whitt
7. Metrics Overkill
The giant video scoreboard in right field is a NexGen stats geek’s wet dream. Every pitch is displayed in type, velocity, horizontal break and something called induced vertical break. Every batted ball in play gets measured via distance, exit velocity and exit angle. There’s even a category for MVR, which apparently stands for “Mound Visits Remaining,” which apparently is a thing.

6. Debut Downer
The worst thing to happen to the Rangers on Sunday wasn’t their hideous baby blue uniforms or the 5-2 loss, it was the premature evacuation of starting pitcher Corey Kluber. A big reason for the team’s optimism in 2020, the two-time Cy Young Award winner left the game with tightness in his throwing shoulder. He left after only 18 pitches, likely destined for a stay on the injured list. When the Rangers missed out on free agent stars Zack Wheeler and Anthony Rendon last winter, they turned to Kluber to fortify their starting pitching rotation. But now … “Anytime your starter comes out after an inning, you are concerned,” said manager Chris Woodward. “We tried to take all the precautions in the world. He is a tough guy. And when a guy says something about his arm, we get concerned, so we’ll see.” With a sputtering offense in a larger ballpark, losing Kluber for any amount of time would be a death knell in the Rangers’ plan to win with pitching.

5. Irregular Season
In the shitstorm that is 2020, 1-2 = 3-6. With a 162-game schedule bastardized to 60, baseball’s marathon has been transformed into a sprint. Fewer games with more importance, meaning every game this year equates to an entire series in a normal year. Other noticeable changes: Pitchers must face a minimum of three batters, both leagues will use the designated hitter, extra-inning games will start with a runner on second base and more than half (16 of 30) of the teams will make the playoffs. The Rangers likely need to win at least 30 games to make the postseason. Starting off 1-2 won’t cut it.

4. Same as it Ever Was
The ribbon-cutting of Globe Life Field was scheduled for late March, complete with concerts by Chris Stapleton and Willie Nelson. The Rangers paid $700 million for construction while the City of Arlington chipped in $500 million. In short, it’s a bigger building with fewer seats (49,000 to 40,000) than their former home across Randol Mill Road. Wider seats are closer to the field. A retractable roof takes only 12 minutes to open/close. And did we mention A/C? The impetus for the new digs was the fact that since 1994 the team played 762 games with a first-pitch temperature of 90+ degrees. In that same period, one of their rivals in the American League West, the Oakland A’s, played only two such games. “No rain and no more heat,” says long-time public address announcer Chuck Morgan. “What’s not to love?” As with any new home, you’ll immediately notice the amenities. Balls hit into the outfield land on crushed coconut husks, leaving a trail not unlike Comet Neowise. The translucent roof provides lots of natural light. Busy neon signage behind home plate reminds fans not of baseball, but Bottled Blonde. In Sunday’s 5-2 loss, the giant roof trusses even came into play as second baseman Rougned Odor caught a pop fly that caromed off a steel beam. There are, however, comforting reminders of home. Nolan’s statue. The “Dot Race” in the middle of the 6th inning. A nod to original Arlington Stadium via a blue Texas-shaped clock in center field. And, of course, Morgan belting out his signature “It’s baseball time in Texas!” This year, it’s followed by the Red Hot Chili Peppers’ “Can’t Stop” as the Rangers take the field. “It’s a great-looking place,” Morgan says. “But eventually we’ve got to win. A division. A pennant. A World Series.” Tall windows behind the outfield give fans, when they can show up, a clear view of the Rangers' old home.
Richie Whitt
3. Indoor Impotence
Considering the relatively nippy temperature with the roof closed, you might consider bringing a light jacket to Globe Life Field. Considering the Rangers’ anemic offense, also pack a crossword puzzle. Maybe a fidget spinner or two. The joint is destined to provide more comfort, fewer fireworks. Gone are the days of sweat dribbling down your butt crack and the jet-stream to right field and power-hitting lineups that belted record homers and won 10-9 games like some slow-pitch softball squad. Center field is a fake, green chasm. It’s a 410-foot straightaway, and during the three-game series with the Rockies it’s where home runs went to die. Said Woodward, “Gonna be a lot of well-hit balls that turn into gravestones out there.” In the Rangers’ only win, starter Lance Lynn struck out nine and Odor had a run-scoring double. It was only their second 1-0 win in 49 season openers. Otherwise, the Rangers, once featuring slugging superpowers Juan Gonzalez, Rafael Palmeiro, Josh Hamilton and Nelson Cruz, managed only five runs in three games. Throw in two exhibition-game losses to the Rockies in Globe Life Field earlier last week, and in five indoor, climate-controlled games Texas has produced just nine runs in 44 innings. In Saturday’s 3-2 loss, they left a palm-to-forehead 12 runners on base. These aren’t your Globe Life Park Rangers. If they were a gas-guzzlin’, RPM-revvin’ Mustang GT, these Globe Life Field Ranges are your quieter, more efficient and tech-savvy Tesla. More computer candy. More bells. More whistles. But where’s the vroom?

2. Room With a View
Mocked by critics as looking from the outside like a tin-roof barn or barbecue grill, Globe Life Field on the inside is state-of-the-art gorgeous glass and steel and windows. Peer through the giant panes in left field and there she is, the still-only-25-year-old Globe Life Park. Perfectly serviceable. Saturated with feel-good memories. Put out to pasture. By a roof. And an air-conditioner. Cue our trickling tear.

1. Ancilliary Anxiety
The Rangers played three close, low-scoring baseball games over the weekend. Was it perfect? Nope. Was it refreshing to be nervous for the first time in four months about something other than coronavirus cases, protests, politics, unemployment, et al? Absolutely.
KEEP THE DALLAS OBSERVER FREE... Since we started the Dallas Observer, it has been defined as the free, independent voice of Dallas, and we'd like to keep it that way. With local media under siege, it's more important than ever for us to rally support behind funding our local journalism. You can help by participating in our "I Support" program, allowing us to keep offering readers access to our incisive coverage of local news, food and culture with no paywalls.
Make a one-time donation today for as little as $1.
Richie Whitt
Contact: Richie Whitt