Will Dallas Also Name a Street After Santos Rodriguez? 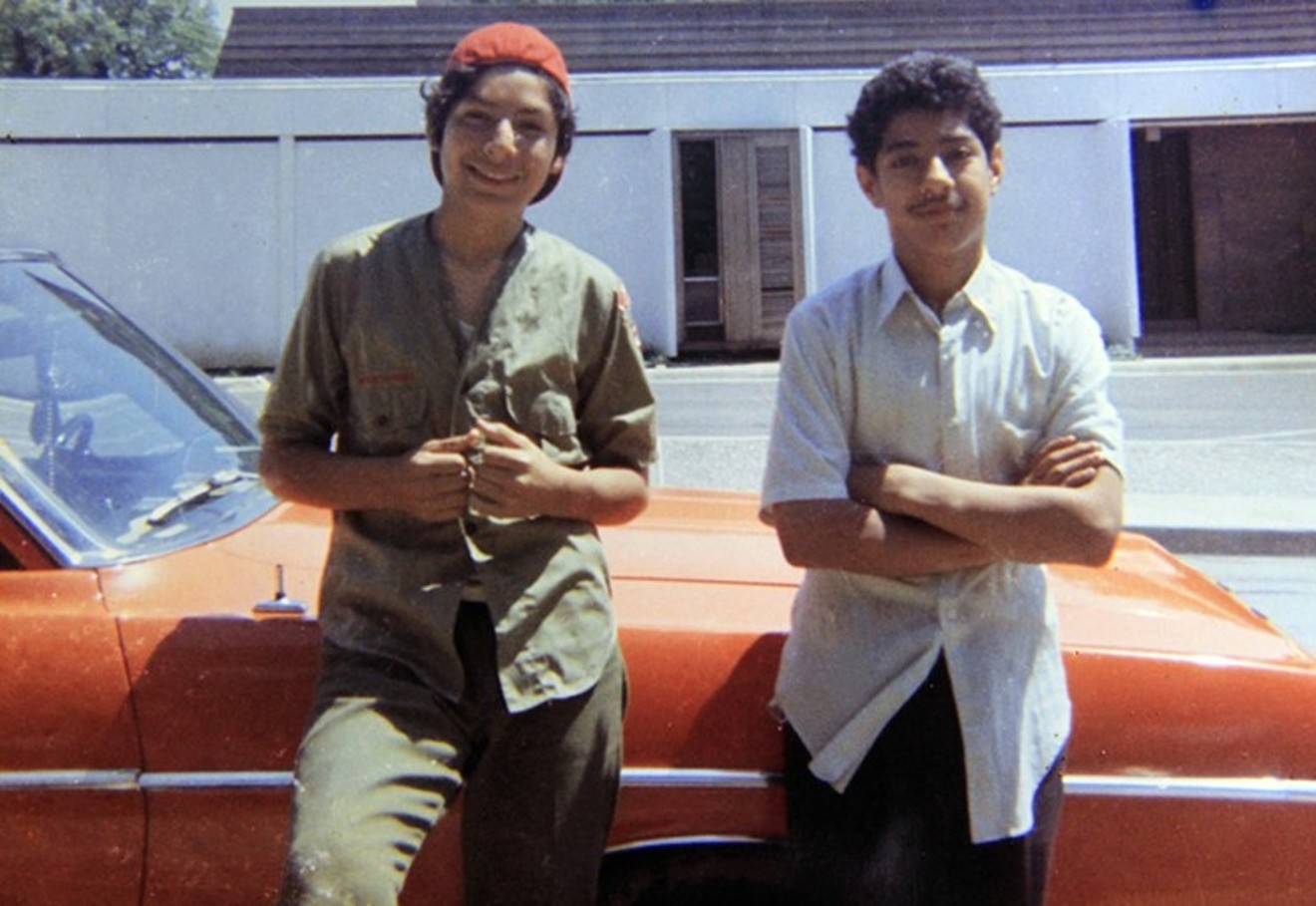 Pictured is David Rodriguez, 13, and his brother Santos in 1973, only months before Santos was murdered by a Dallas police officer. Courtesy of Santos Rodriguez Coalition
Santos Rodriguez, a 12-year-old Mexican-American boy, sat in the front passenger seat of a Dallas police cruiser in 1973. His 13-year-old brother was in the backseat. They’d both been picked up by officers investigating a vending machine robbery.

Both denied having any part in the robbery. But one of the cops, Darrell Cain, shot Rodriguez in the head while trying to coax him into a confession with a Russian-roulette interrogation. The boy died instantly. Reportedly, his last words were, "I am telling the truth." Later, it would be found that fingerprints at the scene of the robbery didn't match Rodriguez or his older brother.

Over the weekend, people came together at Oakland Cemetery to observe the 48th anniversary of Rodriguez's murder. Bessie Rodriguez, his now 77-year-old mother, received a formal apology from Dallas Police Chief Eddie Garcia at the service.

“We must apologize as a police department, a department made up of mothers, fathers, daughters and sons. …,” Garcia said. “On behalf of the Dallas Police Department, as a father, I am sorry. We are sorry that someone trusted to protect you, someone who wore the same uniform I proudly wear today took your son and took David’s brother away by way of murder.”

The killing sent a shockwave throughout Dallas and the rest of the country and people have honored him in different ways since.

In 2015, a park in Seattle, Washington, was named after him. For years in Dallas, Jesse Moreno, District 2 City Council member, pushed for a local memorial. In 2018, when Moreno was a member of the Dallas Park and Recreation Board, he got the city to rename the recreation center at Pike Park after him. Additionally, a statue of Rodriguez in Pike Park is nearing completion, according to The Dallas Morning News.

“One of the things that [Bessie] has always said is ‘I just don’t want my son to be forgotten,’” said Hadi Jawad, executive director of the Dallas Peace and Justice Center. “All of these markers in the city are a good way to give Bessie what she requested, which is that the city never forgets her son.”

Eight years ago, Jawad helped form the Santos Rodriguez Coalition, which supported the renaming of the recreation center and the building of the statute in Pike Park. The coalition also assisted in the production of Santos Vive, a documentary about the killing.

In 2008, though, The Dallas Morning News ran an editorial saying the city should name a street after Rodriguez since it failed to name a prominent boulevard after civil rights leader Cesar Chavez. But that never happened.

“Bessie was promised a lot in the last 48 years as amends for this horrific tragedy that befell her,” Jawad said. “She told me one time that she was promised Pearl Street, that Pearl Street would be renamed Santos Rodriguez Boulevard or road.” But that didn’t happen either. “Her story, if you’ve listened as I have, is a story of betrayal after betrayal after betrayal,” he added.

Some still want to see a Dallas street bear the child's name.

Edward Sebesta, a local author, describes himself as a cultural geographer working on "deracializing" the local landscape. He and others try to track down the racist origins of local streets, buildings and parks. Then, he writes to officials or works with local activists to try to get them changed. He calls the renaming of these streets, buildings and parks “landscape reparations.”

“All of these markers in the city are a good way to give Bessie what she requested, which is that the city never forgets her son.” – Hadi Jawad, Dallas Peace and Justice Center

Sebesta was part of the recent efforts that saw a portion of Lamar Street renamed to honor Botham Jean, a 26-year-old accountant who was shot dead on Sept. 6, 2018, in his own apartment by an off-duty Dallas police officer.

Amber Guyger, the officer, claimed she mistakenly entered Jean's apartment believing it was hers one floor below and killed Jean because she believed he was an intruder. Guyger was convicted of murder in October 2019. The Dallas City Council unanimously voted to change a portion of Lamar to Botham Jean Boulevard.

Sebesta said these efforts help make landscapes more representative of the communities that built and live in them. In time for the anniversary of his death, Sebesta released a list of criteria for choosing a street to rename after Rodriguez.

Sebesta said if a street is to be renamed after Rodriguez, it shouldn’t be in a marginal space. Often, when streets are renamed, they’re in less prominent areas, out of the way where a limited number of people will see them. He points to Cesar Chavez Boulevard as an example. Originally, Cesar Chavez Boulevard was supposed to replace what used to be Industrial Avenue, now Riverfront Boulevard. But, the community was denied the more prominent street.

“When the renamed Oakland Avenue to Malcolm X Avenue, the resistance was over the section which went into Deep Ellum in a white neighborhood,” Sebesta wrote.

This is why he thinks if a street is going to be named in honor of Rodriguez, it should be prominent, visible to the entire community. But Sebesta also thinks a Santos Rodriguez Street should eliminate a racist street name or be a way to right a historic wrong. For example, Riverfront Boulevard would be a good candidate.

Jawad said he would support efforts to name a street after Rodriguez, and activists will continue to search for opportunities to honor Rodriguez. “These are just ways for us to grant Bessie her request so that the city doesn’t forget Santos,” he said.
KEEP THE DALLAS OBSERVER FREE... Since we started the Dallas Observer, it has been defined as the free, independent voice of Dallas, and we'd like to keep it that way. With local media under siege, it's more important than ever for us to rally support behind funding our local journalism. You can help by participating in our "I Support" program, allowing us to keep offering readers access to our incisive coverage of local news, food and culture with no paywalls.
Make a one-time donation today for as little as $1.