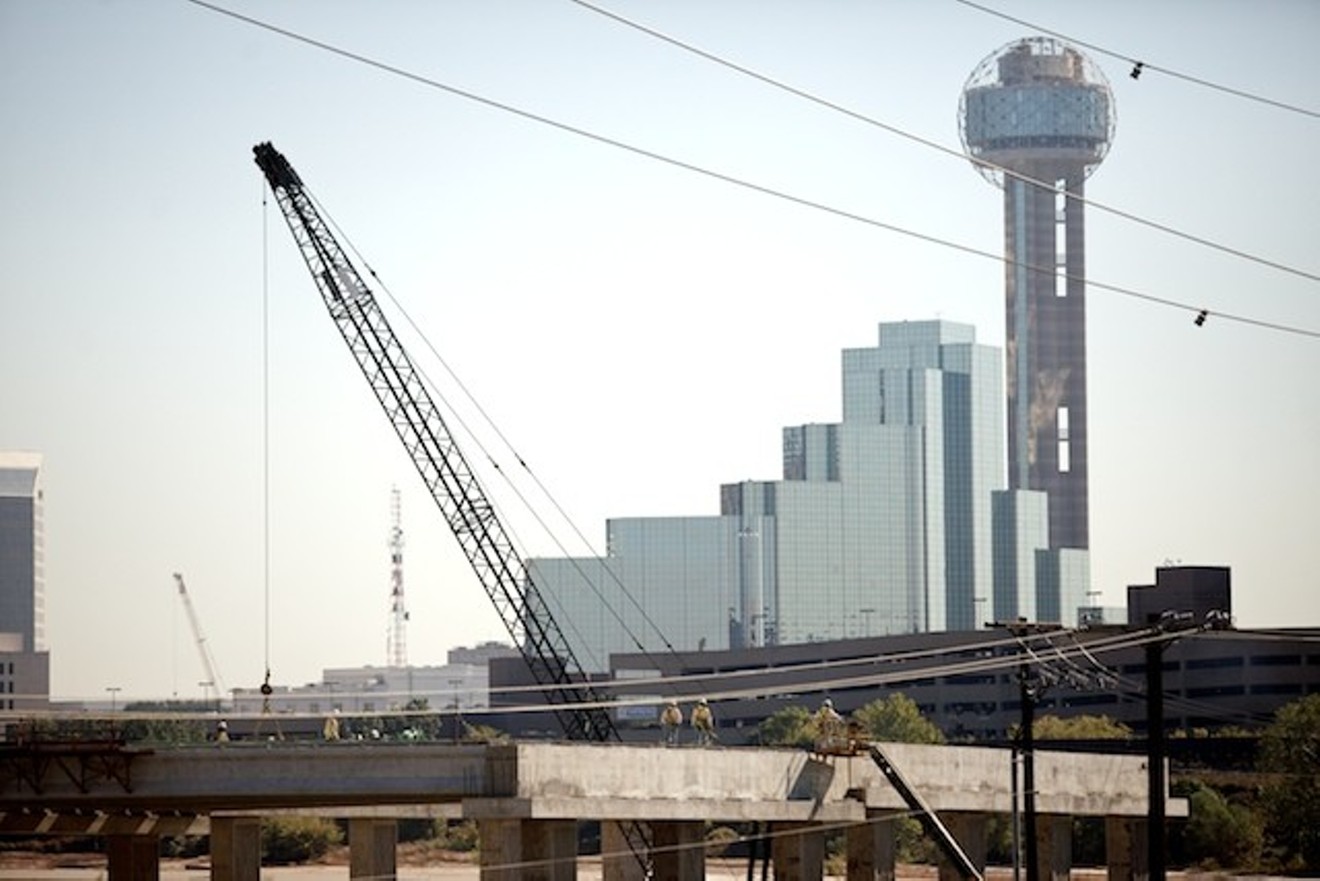 In Dallas, it can take up to 42 days to get a permit for building single-family developments. Patrick Michels
On Sundays in Dallas, you shouldn’t hear the loud clanking of jackhammers, electric saws and welding machines sounding from nearby construction sites. That’s how the city code is written now, but that could change.

Today, construction is limited in Dallas to between 7 a.m. and 7 p.m. Monday through Friday, and from 8 a.m. until 7 p.m. on Saturdays. There are some exceptions, mostly for holidays and emergencies. Generally, though, Sunday is not one of those exceptions the city code allows.

But at Monday's Government Performance and Financial Management Committee meeting, City Council members discussed whether construction work should regularly be allowed throughout the weekends in Dallas.

City Council member Cara Mendelsohn, chair of the committee, said the topic came up while discussing upcoming work on DART’s Silver Line Regional Rail Project. In those meetings, Mendelsohn said, they were discussing construction work for the project that would have to take place over the weekend.

Some interpreted “weekends” as including Sunday. Others thought it only included Saturday, like the city code says.

To clear up the confusion and determine how the rest of the council feels about allowing construction work on Sundays, Mendelsohn brought it to the committee.

Although it’s not expressly permitted in the city code, the Dallas’ Department of Public Works said it does allow constructions on Sundays when it’s necessary.

For example, if a crew is called to do a street repair on Saturday that requires another day’s work, they might be authorized to finish on Sunday. This way, they don’t add traffic delays during rush hour the following Monday.

The Department of Public Works said they have to use their discretion. “It’s more on a case-by-case basis,” a representative with the department said. “But that’s more of an exception, as opposed to the rule. The rule is what we mirror in [the city code]."

City Council member Gay Willis said she gets complaints from residents in her district about after-hours construction work. “While most people abide by the rules in District 13, we do have the occasional situations where some construction is taking place outside of that code, and believe me, I hear about it,” she said.

Willis said she might not have a problem with Sunday being an exception for some construction work, but making it the norm may be too big of a burden on residents.

Others were more open to the idea of allowing construction on Sundays, citing Dallas’ infrastructure and building delays. “I feel like if we’ve got an important public works project … if we need to use Sunday to do it, why wouldn’t we?” City Council member Chad West said.

Earlier in the meeting, the committee was also briefed on the city’s permitting process, which has led to building delays. “We are extremely behind on infrastructure,” City Council member Adam Bazaldua said. “Time is money.”

“I’ll give you two: one of them is that even God took a day of rest,” she said. “No. 2 is that people are experiencing, especially on a project like the Silver Line, construction literally from sun up at 7 a.m. Monday through Friday to 9 p.m. and then all day Saturday, and they deserve a day to be able to sleep in without pounding next to their house.”

City staff is collecting more information on allowing the work on Sundays to be discussed further in about a month.
KEEP THE DALLAS OBSERVER FREE... Since we started the Dallas Observer, it has been defined as the free, independent voice of Dallas, and we'd like to keep it that way. With local media under siege, it's more important than ever for us to rally support behind funding our local journalism. You can help by participating in our "I Support" program, allowing us to keep offering readers access to our incisive coverage of local news, food and culture with no paywalls.
Make a one-time donation today for as little as $1.