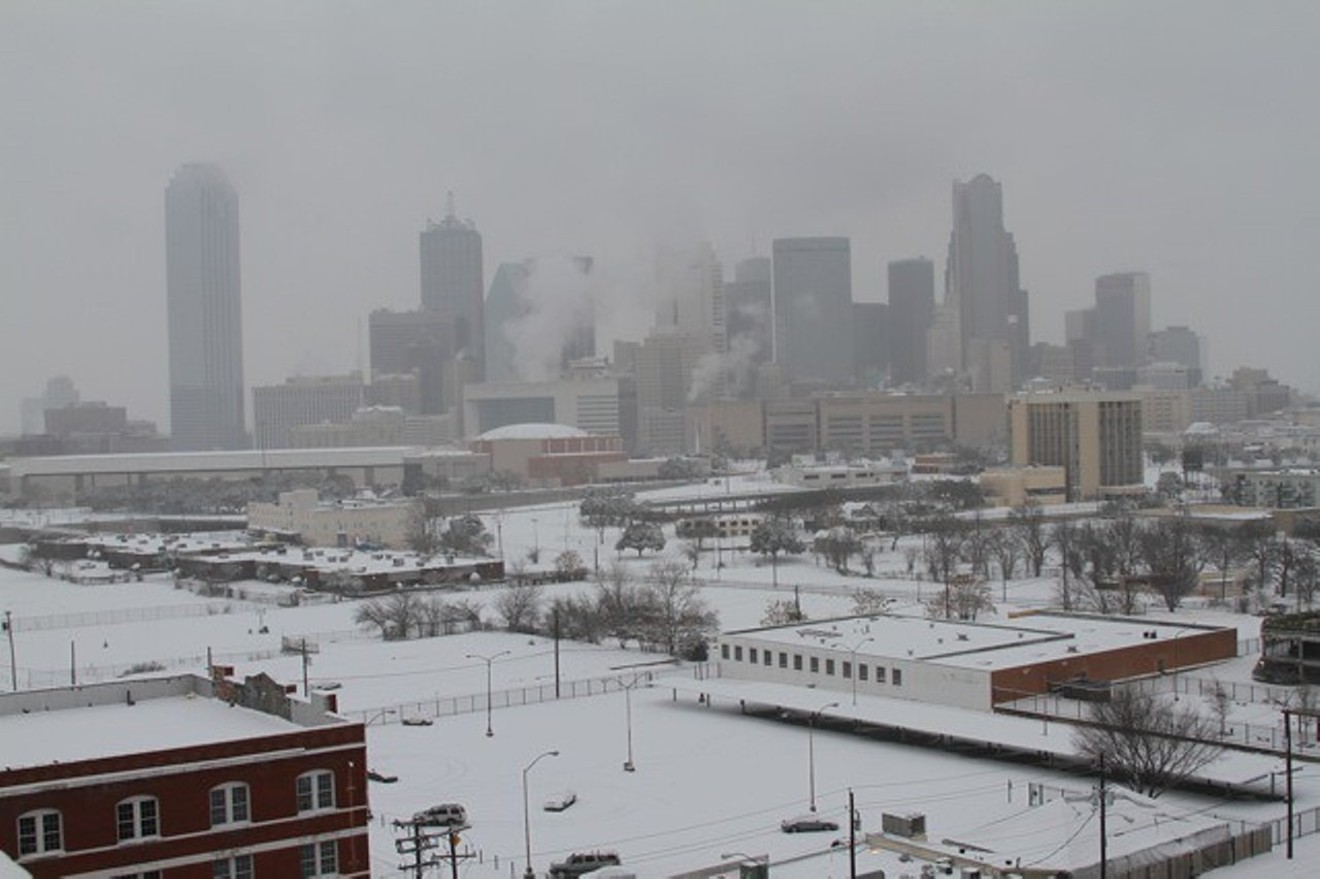 Parts of the Dallas area are expected to see snow on Tuesday, leading some Texans to have flashbacks of the Snowpocalypse of February 2021. Creative Commons/DJJudah
North Texans venturing out into Tuesday's less-than-pleasant weather could find themselves muttering a certain four-letter word: "snow."

The National Weather Service notes on its site that residents should expect hazardous weather conditions, such as a potential thunderstorm.

NWS weather wizards have predicted that the temperature will drop to around 39 degrees in Dallas by mid-afternoon on Tuesday, with the possibility of wind speeds up to 25 mph. Dallasites might also get a glimpse of some snow on Tuesday night as flakes mix in with the rain.

Big D isn't the only area that's likely to get drenched. Monique Sellers, a meteorologist with the weather service's Fort Worth office, said that much of the North Texas area will see precipitation.

Bright side: Sellers predicts that temperatures in Dallas-Fort Worth-Arlington will stay warmer than freezing.

"We're really not expecting anything to accumulate on the surface itself," she said. "You'll see those big, wet, fluffy flurries flying through, but you're not really going to see any sort of major accumulations and road conditions deteriorating or anything like that."

Morning commuters in the North Texas region may not have icy patches to contend with, but Sellers still advises office-goers to drive carefully on wet roads.

WFAA weather guru Pete Delkus also weighed in on Monday with a forecast of his own.

"A Winter Weather Advisory has been posted for parts of North Texas from noon Tuesday to midnight," he wrote in a tweet. "Minor travel impacts are expected here as there could be snow accumulations of a light coating to under 3 inches."

A Winter Weather Advisory has been posted for parts of North Texas from noon Tuesday to midnight. Minor travel impacts are expected here as there could be snow accumulations of a light coating to under 3 inches. #wfaaweather pic.twitter.com/r9HIoIeXu4

Compared with 2021's veritable Snowpocalypse, though, Tuesday's wintry weather shouldn't be too much of a problem.

“This is not one of our bigger events," Sellers said. "It really is more towards the Oklahoma area and western North Texas, so in the Metroplex, we’re going to be OK.”

To learn how the state's power is expected to fare amid Tuesday's rain-turned-possible-snow, the Observer reached out to the Electric Reliability Council of Texas (ERCOT), which manages much of the grid. We didn't hear back by press time, but ERCOT did attempt to ease worried minds in a tweet on Friday.

"With potential freezing precipitation moving through the Panhandle, North and West areas of the ERCOT region next week," the agency wrote, "we are monitoring forecasts and expect sufficient generation to meet demand."
KEEP THE DALLAS OBSERVER FREE... Since we started the Dallas Observer, it has been defined as the free, independent voice of Dallas, and we'd like to keep it that way. With local media under siege, it's more important than ever for us to rally support behind funding our local journalism. You can help by participating in our "I Support" program, allowing us to keep offering readers access to our incisive coverage of local news, food and culture with no paywalls.
Make a one-time donation today for as little as $1.