After Two Days of Violence, Sunday’s Protests Were Largely Peaceful A final protest of the weekend around the death of George Floyd wound through downtown Dallas peacefully. Taylor Adams
While Dallas initially saw peaceful protests turn into violence, arrests and a curfew around downtown, the weekend ended with a vocal but placid march downtown.

Clergy members from throughout Dallas gathered with residents in front of Dallas Police headquarters starting at 5 p.m. Sunday. The crowd bowed their heads as the Rev. Jeff Warren, senior pastor of Park Cities Baptist Church, said, “Here we are again, and we don’t want to be here." "We’re here because we’re frustrated... this is about case after case, one man’s life after another," a clergy member said at the vigil outside Dallas Police headquarters Sunday evening.
Taylor Adams
As the crowd filled the promenade for the vigil honoring George Floyd, city officials including Police Chief U. Renee Hall, Mayor Eric Johnson and Deputy Mayor Pro Tem Adam Medrano stood by.

Meanwhile, a different scene with more activity was happening at Klyde Warren Park across downtown. Police had lined parts of the park about an hour before people started gathering. Once they did, the group of about 200 made its way on a march downtown, chanting and peacefully walking in the middle of streets with red lights.

“There’s been a lot of things for some time. It’s more than just this president, which many people focus on,” said Chastity Ford, who participated in the march Sunday evening. “We’re here to have our voices heard: to say we matter just as much as anyone else.”

Chants of “Black lives matter” and “I can’t breathe” were frequently heard as the crowd weaved its way through much of downtown and Victory Park. 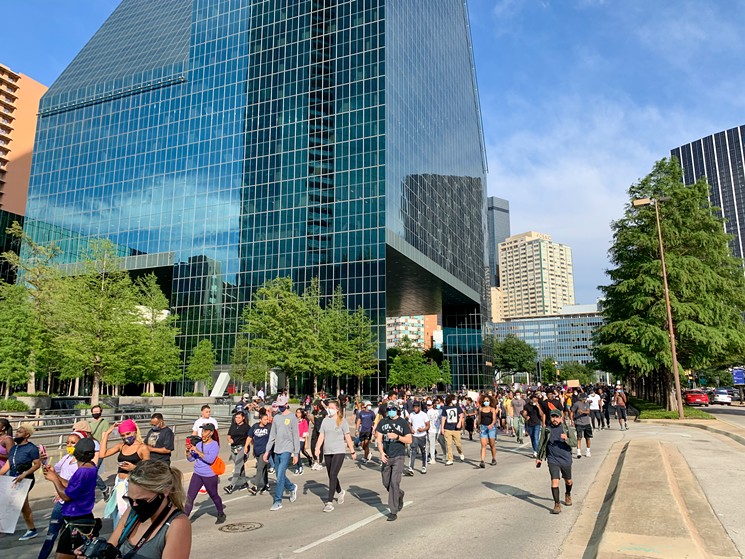 As participants weaved their way through downtown streets, they blocked traffic for cars that didn’t honk in frustration, but honked in solidarity with fists held high through windows. The cheers were constant at every intersection where it happened.

There was anger in voices, constant chanting and a real lack of police presence, especially early on. Later, as the group that started moving at about 5:30 p.m. made its way to Victory Park around 6:20 p.m., more police officers showed up. Some appeared to be there to keep people off the streets; others stood off in the distance, gathered together. Water was frequently available for participants.
Taylor Adams
It was a hot early evening, and people were pulled over with the trunks of their vehicles open, passing out bottled water. Others walked through the crowd, offering strangers bottles of water from their bags.

Many shouted chants through their masks, reminding us we’re dealing with at least two major issues right now.

Gabby, a protester who declined to give her last name, was on the street for the third time over the weekend.

“I’ve been instilled with fear and resilience,” she said as she walked along North Lamar Street. “Friday started out peacefully. DPD split us up and gassed us. Yesterday they were chasing us. There were women and children, pregnant women. We were peaceful.

“We’re hoping we keep it peaceful today. If police take it into their own hands, how are we supposed to protest? It’s our First Amendment right.” One officer startled some protesters by cocking his gun. Activists encouraged other participants to keep walking.
Taylor Adams
Police did remain mostly peaceful. One officer did cock his gun as the group passed in Victory Park. He had the weapon pointed in the air and didn’t shoot, but the action made a sound that stopped some protesters.

Residents from apartment buildings above leaned outside their windows, some out of curiosity others showing support.

Police officers keep demonstration participants on the sidewalk.
Taylor Adams
While the march started in Klyde Warren, on the north end of downtown, around 6:57 p.m., three minutes before the new curfew was to go into effect, the group was nearing what’s being called the East Quarter — that eastern end of downtown that’s being further developed.

"Where are we going?" "Will they [police] let us leave?" people asked as time grew short.

They were not near where they started, where many of them parked their vehicles.

But here was where they were led, and at 6:59 p.m. a police officer spoke over the speaker of his squad car:

“You have to leave the area, or you will be arrested … You have been warned … You can no longer protest.”

At this point, protesters ran both east and north, which required quite a bit more running to get beyond the curfew boundaries. Many others shot back northwest, where police in squad cars then followed them.

A number were arrested at Thanksgiving Square. Around 9 p.m., Dallas police announced that 30 people had been booked into jail and several more were being processed for curfew violations.
KEEP THE DALLAS OBSERVER FREE... Since we started the Dallas Observer, it has been defined as the free, independent voice of Dallas, and we'd like to keep it that way. With local media under siege, it's more important than ever for us to rally support behind funding our local journalism. You can help by participating in our "I Support" program, allowing us to keep offering readers access to our incisive coverage of local news, food and culture with no paywalls.
Make a one-time donation today for as little as $1.