Finally, a victory for Cruz that he and his daughter can celebrate together. Anna Moneymaker/Getty
If it wasn't obvious before, we can say it’s official now: We like reading about polarizing public figures. They really move the needle. Perhaps it’s a schadenfreude thing, or perhaps we just want to keep tabs on the people who seek to have more power over others. Either way, the Observer’s most-read news stories of 2022 include reports centering on such notable conversation-starters as Sen. Ted Cruz, Gov. Greg Abbott, Jenna Ryan, Shelly Luther and others.

And weed. We like to read stories about weed.

10. Plano Police Arrest Woman After Racist Video Emerges of Her Hitting and Threatening to Shoot Women by Danny Gallagher
The parking lot of a Plano restaurant was the scene of what police call a racially motivated crime when Esmerelda Upton grabbed headlines in August. Danny Gallagher reported that the verbal and physical attack was recorded by a number of people and quickly went viral on social media. In the clip, Upton was seen calling four women “curry-ass bitches” before also threatening to shoot them. Although she was not arrested by police called to the scene when the incident occurred, Upton was arrested the next day. She’s facing a pair of misdemeanor charges and a pair of lawsuits.

9. Federal Cannabis Legalization Heads to the Senate … Where It Died Last Year by Jacob Vaughn
A bunch of neighboring states are making weed legal. So, why can’t Texas? That question keeps coming up in state legislative sessions, only to be struck down or completely ignored. Of course, this is an issue that’s bisected along party lines. Jacob Vaughn’s piece digs into the reasons Democrat leaders say cannabis reform is necessary. The MORE Act “would remove cannabis from the federal controlled substances list and expunge people’s prior cannabis-related charges,” Vaughn notes. We’ll believe it when we can smoke it (legally). We like writing about marijuana. You like reading about it. Wonder if there's anything else we have in common weed-wise.
Jacob Vaughn
8. Move Aside, Delta-8, Texas Smoke Shops are Filling Up with Legal Delta-9 THC Products by Jacob Vaughn
As evidenced in the previous marijuana story from Vaughn, the issue of legalizing cannabis has many facets. Governmental confusion over which hemp products are legal and which contain too much THC has, in turn, caused confusion and frustration for customers, smoke shop owners and hemp farmers. One thing we know from this article is that motivated entrepreneurs won’t let a bit of legislation slow them down. They’ll keep looking for new ways to get people high while government agency suits keep trying to block them.

7. Gov. Abbott’s Migrant Buses Hit Roadblock as D.C. Attorney General Takes a Closer Look by Patrick Strickland
If Texas Gov. Greg Abbott knows how to do one thing, it is to get national attention by pandering to his base. In October, Patrick Strickland reported that legal questions began to appear after buses carrying over 12,000 immigrants from the Texas-Mexico​​ border had been dispatched to sanctuary cities including New York City and Chicago. Although the busing was a popular move among many Texans, reports suggested that before being loaded onto the northbound buses, migrants were being misled about their journeys.

6. Dallas Prepares for 'Armed Resistance' During Local Homeless Encampment Sweeps by Jacob Vaughn
Where we live our lives continues to be a multi-pronged issue that Dallasites read a lot about. Homelessness, eviction policies, rent prices, appraisals and neighborhood zoning and development continue to make their presence felt in headlines on a regular basis here at the Observer. In September Vaughn reported on how Dallas' attempts to clean and sweep homeless encampments had turned into occasions for "armed resistance" that led city officials to prepare for the worst when planning future sweeps.

5. North Texas Could See a Freezing Start to 2022 by Jacob Vaughn
A large chunk of Texas residents learned what ERCOT stood for in early 2021 when record-breaking winter storms caused a power crisis. Less than a year after that catastrophe, the mere mention of frozen pipes, the grid or ERCOT elicited fearful and exasperated responses from just about everyone, especially those who dealt with home flooding and subsequent, endless renovations. On New Year’s Eve of last year, Vaughn (always with the encouraging news, that Jacob) reported that North Texas might begin 2022 under a blanket of the freezing, grid-breaking temps that had made early 2021 almost as screwed-up as 2020 had been for so many.

4. New Poll Shows Texas Republicans Believe Christians, White People Most Discriminated Against by Simone Carter
Ah, yes, the most persecuted segment of the American population, of course, is … white Christians? In May, many Texas Republicans certainly thought so. Simone Carter wrote about a poll in which “74% of Texas Democrats believe that either Black or transgender people endure the highest level of discrimination in the nation,” before adding that “Republicans were split between white folks (34%) or Christians (31%).” But don’t fret, dear Texan reader, as Carter points out near the end of the article, a different survey revealed that Republicans around the country felt the same way.

3. Three Times Salon Owner and House Candidate Shelley Luther Should’ve Stopped Talking by Simone Carter
Speaking of articles penned by Carter that discuss certain views of Republicans, this piece was yet another reminder of how the pandemic was still wreaking havoc in North Texas. Dallas salon owner Shelley Luther rocketed to notoriety in the thick of the 2020 COVID-19 shutdown when she defied government orders and kept her business open. She rode her frenzied wave of Fox News fame to a defeat in a December 2020 Texas senate election. Of course, she kept trying, losing another election in 2022. She also kept talking, specifically touching many popular, hot-button conservative talking points that earned her even more attention. 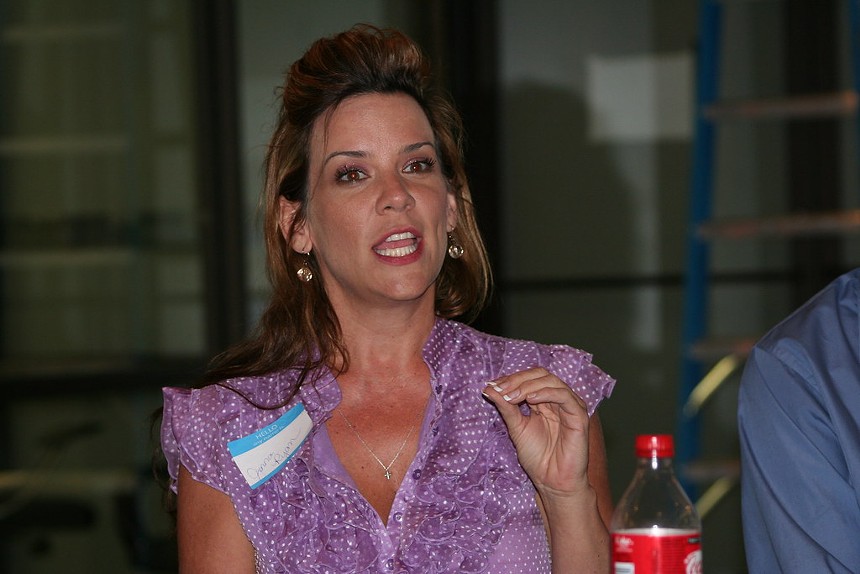 Real estate broker Jenna Ryan said she was following former President Donald Trump's orders.
"Dallas SEO/SEM Meetup - Linkbuilding Tips" by Levelten Interactive is licensed under CC BY-SA 2.0
2. Already Behind Bars: Capitol Rioter Jenna Ryan Went to Federal Prison Days Before Christmas by Simone Carter
We’re beginning to sense a trend: Here’s another article written by Carter addressing an infamous Republican who found herself in hot water. Published just before the end of 2021, Carter's story reported that one of the most prominent North Texas participants in the Capitol Riots of January 6, 2021 (and there were plenty of rioters from our neck of the woods), had finally reported to prison. Frisco’s Jenna Ryan received a 60-day sentence for one charge of illegally demonstrating inside the Capitol. It’s worth noting here that a few months before going to jail, Ryan tweeted that she was “definitely not going to jail.”

1. Ted Cruz's Daughter Disses Him on TikTok: 'I Really Disagree With Most of His Views' by Simone Carter
Believe it or not, Carter wrote about more than just Republican leaders and lightning rods for the Observer. But the numbers don’t lie: There’s something magnetic about an elected official getting served a heaping dose of social media shade. Sen. Ted Cruz has vaulted from regional notoriety into the role of national power player and frequent meme over the past six years. His love of Cancun vacations is something we can all relate to, even if you don’t share his political views. You know, just like his daughter, Caroline, who took to TikTok to weigh in on her dad’s stances. Check out the impossible-to-ignore opening to the most-read news story of 2022: “Texas Sen. Ted Cruz would consider running for president again, but we know one person who wouldn’t vote for him: his own daughter.”
KEEP THE DALLAS OBSERVER FREE... Since we started the Dallas Observer, it has been defined as the free, independent voice of Dallas, and we'd like to keep it that way. With local media under siege, it's more important than ever for us to rally support behind funding our local journalism. You can help by participating in our "I Support" program, allowing us to keep offering readers access to our incisive coverage of local news, food and culture with no paywalls.
Make a one-time donation today for as little as $1.
Kelly Dearmore