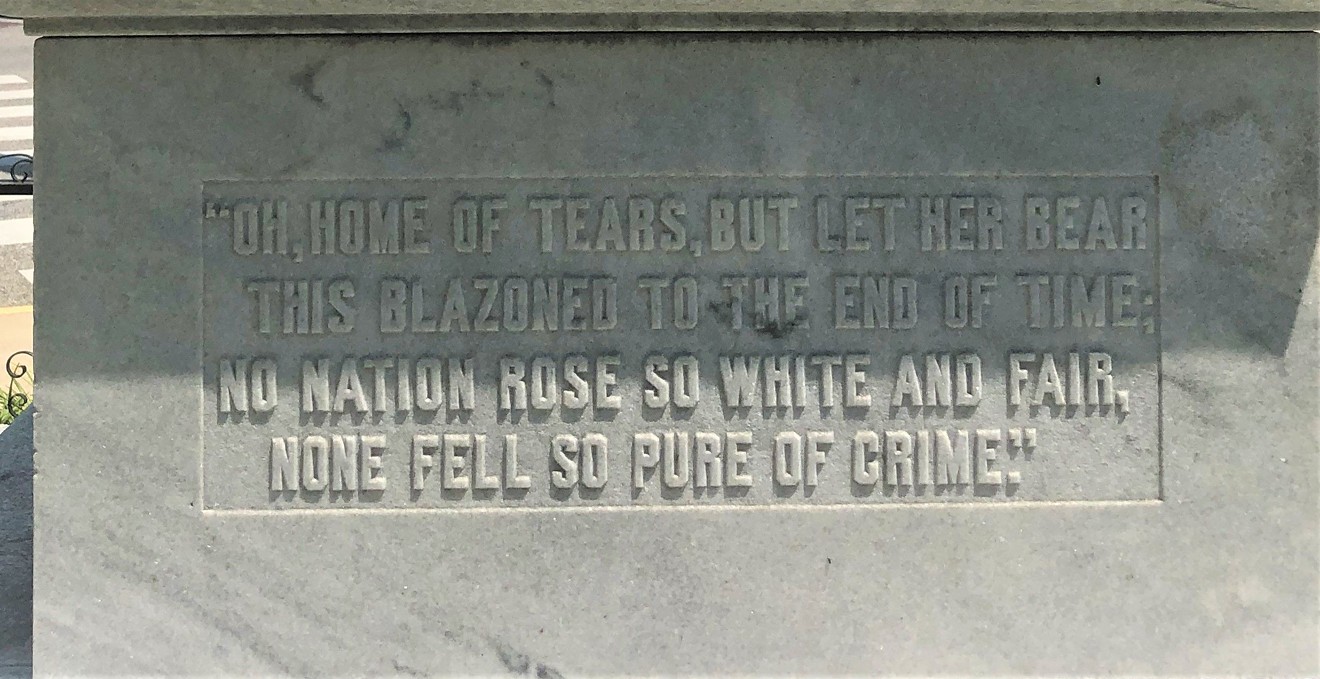 One of Gainesville's Confederate monuments remembers a "white and fair" nation. Protesters are calling for its removal. Jessica Luther Rummel
Since the George Floyd protests began, calls for the removal of statues deemed racist have reached as far as Belgium, the United Kingdom and South Africa. They’ve also crescendoed in Gainesville, a town 85 miles north of Dallas.

Gainesville, which has a population of fewer than 17,000 people, is home to two Confederate monuments. One rests in front of the town’s courthouse; the other stands at the entrance of Leonard Park. Now, protesters are calling for the removal of both.

"If those monuments were not in place, that power of hatred would not exist," said Torrey Henderson, co-founder of the grassroots activist group PRO Gainesville.

Some Confederate monuments in larger cities like Dallas and Fort Worth have been dismantled as a result of the ongoing protests. But efforts to remove statues in smaller Texas towns, which largely lean conservative, may prove to be more complicated.

An inscription on the Gainesville courthouse statue’s base reads:

“Oh, home of tears, but let her bear
This blazoned to the end of time;
No nation rose so white and fair,
None fell so pure of crime.”

That racist epitaph is upsetting to many in Gainesville’s community, Henderson said. Together, the town's two Confederate monuments perpetuate bigotry and intimidate the town’s minority population, she added.

“I feel like it’s humiliating, it’s degrading and it’s right next to a courthouse, which should be a place for justice,” Henderson said. “And that’s not what’s happening here.”

Henderson helped to organize a PRO Gainesville protest last Wednesday night. Around 50 demonstrators gathered on the city’s square to denounce racial injustice, Henderson said. But they were significantly outnumbered by counterprotesters, many of whom openly carried firearms.

“That is just complete intimidation and white supremacy,” she said.

PRO Gainesville is facing an uphill battle when it comes to dismantling the town's monuments, Henderson said. The group must address two government entities; the Cooke County Commissioners would decide on the courthouse statue’s fate, while the Gainesville City Council would vote on the one in Leonard Park.


Gainesville Mayor Jim Goldsworthy agrees that the monuments’ inscriptions are offensive. During next Tuesday's meeting, the City Council will consider updating the park statue's engraving with historical context or removing it altogether.

“Everything’s on the table,” Goldsworthy said. “For me, the only consideration that’s not on the table is leaving it as is.”

Cooke County Judge Jason Brinkley said that the county commissioners have not yet decided on the courthouse monument's fate. They will listen to the community's comments to help inform their choice, he added.

Each time, Luther Rummel attempted to file a report with one of the police officers who were standing by. Each time, she said she was ignored.

Once, an officer even feigned that he couldn’t hear her complaint, she added.

“There are laws in the books against willful intimidation and harassment, and that’s exactly what we saw [Wednesday] night,” Luther Rummel said. “Police not only allowed it, but they participated in it.”

Luther Rummel has since filed two reports of terroristic threats with the city’s police department. She plans to submit two more once she identifies the other men who threatened her.

Gainesville police Chief Kevin Phillips said that his officers were neutral and did their best to protect both groups. He disagrees with Luther Rummel’s assertion that his officers sided with the counterprotesters.

Luther Rummel played an integral role in the movement to remove the Confederate monument from Denton’s square. On June 9, Denton County Commissioners voted to relocate the town’s monument. That same day, commissioners in Tarrant County voted to remove one in Fort Worth.

Some argue that Gainesville’s monuments should remain untouched because they represent history, but Luther Rummel said they're far from unique. One of the soldiers is an exact replica of the one that stood atop Denton's monument, she said.

Both of Gainesville’s monuments were supplied by the United Daughters of the Confederacy, a “heritage” group of white Southern women with blood-ties to Confederate soldiers. The group was responsible for erecting more than 700 monuments across the U.S. at the turn of the 20th century, according to The Washington Post.

The 65-foot obelisk, upon which a Confederate soldier is perched, was removed at the end of June, according to Spectrum News. The statues of Confederate President Jefferson Davis and Gens. Stonewall Jackson, Robert E. Lee and Albert Sidney Johnston were also dismantled that month.

City Council members voted to remove Dallas’ monument in February 2019. Plans for its relocation were stalled, though, when an appeals court blocked it, according to The Dallas Morning News. The court later acquiesced after an attorney argued that someone could get injured if protesters attempted to topple it on their own.

The United Daughters of the Confederacy erected the granite and marble monument in 1896, according to KERA.

The United Daughters of the Confederacy also gave Granbury its Confederate monument. Built in 1913, it represents the town’s founder, Hiram B. Granbury, who was a brigadier general of the Confederate army. He was killed during battle in 1864, according to the city of Granbury’s website.

Now, a group of Granbury residents is calling for the statue’s removal from the town’s square. As of Tuesday morning, a Change.org petition in support of its removal had more than 2,700 signatures. Its creator, Stephen Torres, said he believes the monument is a symbol for white supremacy.

“It stands for the wrong side of humanity and is a constant reminder of slavery, racial segregation, and violence,” he wrote on the petition.

A counter-petition to keep the monument had garnered 150 signatures by Tuesday morning.

The Hood County Commissioners’ office did not respond to requests for comment.

The United Daughters of the Confederacy erected a Confederate statue on the Waxahachie courthouse lawn in 1912, according to the Library of Congress. A Change.org petition for its removal had attracted nearly 2,300 signatures as of Tuesday morning.

There’s also a petition to save the monument, however, that had around 4,000 signatures by Tuesday.

“The statue reminds us to never let anything tear us apart,” its creator, “Isaac L.,” wrote on the petition. “We can not [sic] fall victims to the SJW mob that seeks to destroy history.”

The Ellis County Commissioners are not planning to discuss or vote on the removal of Waxahachie’s Confederate monument, a county spokesman said.
KEEP THE DALLAS OBSERVER FREE... Since we started the Dallas Observer, it has been defined as the free, independent voice of Dallas, and we'd like to keep it that way. With local media under siege, it's more important than ever for us to rally support behind funding our local journalism. You can help by participating in our "I Support" program, allowing us to keep offering readers access to our incisive coverage of local news, food and culture with no paywalls.
Make a one-time donation today for as little as $1.