Texas has an illegal voting problem, according to the state's attorney general, Ken Paxton. hermosawave
From the outside, it's hard to know what Texas Secretary of State David Whitley was thinking when he made his quixotic attempt to purge thousands of voters from the state's rolls late last month. Rather than just doing his job and making sure Texas' election machinery runs smoothly, Whitley chose to create a solution in search of a problem, sending a list of some 95,000 voters to county officials around the state for citizenship checks.

The move didn't work. Those checks seem unlikely to happen soon, if they ever do, and Whitley's official confirmation to his post is in jeopardy, all because he felt the need to protect Texas' elections from the heaps of illegal votes he believes threaten the state's democratic processes, despite the fact that they definitively don't.

It just doesn't make sense that Whitley would do what he did unless he believes what his fellow Republicans believe, according to a new poll from the University of Texas and the Texas Tribune.
click to enlarge 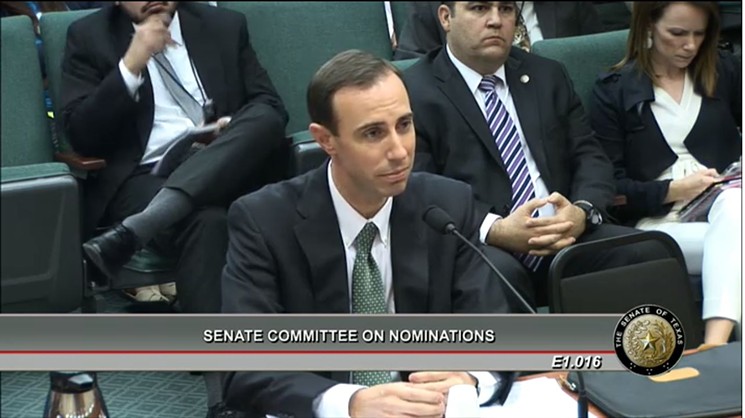 According to the poll, more than three-quarters of Texas Republicans believe that noncitizens cast ballots either "sometimes" or "frequently" in Texas elections, compared with just 22 percent of Democrats.

"It's been a staple of Republican rhetoric for at least the past four to five years that significant numbers of undocumented immigrants are voting in Texas elections," Rice University political science professor Mark Jones says. "Governor Abbott has implied it. The attorney general [Ken Paxton] has stated it forthrightly. The lieutenant governor has stated it forthrightly and numerous Republican county clerks, even in Harris County and elsewhere, have made the case that large numbers of undocumented immigrants are voting, a case that was also made broadly at the national level by President Trump."

Jones says that the number of noncitizens who've voted in Texas could fit on a school bus.

"The factually correct answer to the survey question is 'rarely.' 'Never' is incorrect because 'never' is an absolute," Jones says.


"It's [most] useful for Republicans as a way to mobilize, engage and enrage the base." — Mark Jones

Though Jones doesn't believe Texas Republicans' beliefs about illegal voting could lead to a significant challenge to an election result, he thinks they could undercut Texas Democrats who might win election in 2020.

"It's more useful for Republicans as a way to mobilize, engage and enrage the base than as an actual legal tool in the aftermath of an election that doesn't go their way, in large part because, in the end, this is all relatively verifiable," Jones says. "You probably don't want to get into a court case where you actually do spend the time and the money to go through every single registered voter in a county or a congressional district only to find that there are only doubts about the citizenship status of a dozen — and those are just doubts. There's not even proof that they aren't citizens, there's just reasonable doubt that they are not citizens."
KEEP THE DALLAS OBSERVER FREE... Since we started the Dallas Observer, it has been defined as the free, independent voice of Dallas, and we'd like to keep it that way. With local media under siege, it's more important than ever for us to rally support behind funding our local journalism. You can help by participating in our "I Support" program, allowing us to keep offering readers access to our incisive coverage of local news, food and culture with no paywalls.
Make a one-time donation today for as little as $1.