Get ready for a blistering mid-July. batuhan toker
For the fifth consecutive day, temperatures at DFW Airport easily cracked 100 degrees Wednesday, topping out at 106 just after 5 p.m. As the relentless heat pummeled North Texas, the Electric Reliability Council of Texas, the nonprofit that oversees 90 percent of Texas' electric grid, felt the stress as well.

Twice Wednesday, according to ERCOT, Texans demanded more electricity than any other time in the state's history, breaking a record set in August 2016. Between 3 and 4 p.m. peak demand reached 71,438 megawatts, topping the Aug. 11, 2016, demand of 71,110 megawatts. The next hour, Texans' demand for life-giving electricity and, presumably, air conditioning, went even higher, cresting at 72,192 megawatts.

"Texans continue to deal with extreme heat across the state as ERCOT and electricity providers are working diligently to ensure they have the power they need to keep cool. We fully expect to keep hitting new demand records as summer 2018 continues," ERCOT said in a statement Wednesday.

For the rest of the week and the upcoming weekend, things look like they'll be getting even tougher for the electrical grid — and North Texas' collective sanity. 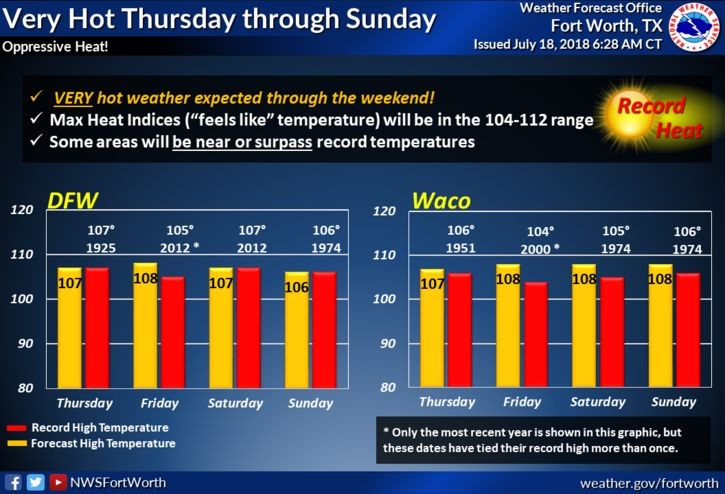 It's going to be so, so hot.
National Weather Service

In April, ERCOT said it expected record electricity demand throughout the summer. Despite the demand, however, the agency said it anticipates being able to cover Texans' electricity needs, thanks to power reserves available to the state.

"ERCOT and the market participants we work with are focused on system performance this summer," ERCOT President and CEO Bill Magness said in a statement. "A growing economy and retirements of generating units will tighten reserves available on peak summer days."

The National Weather Service's Fort Worth office forecasts "oppressive heat" for at least the next five days, with temperatures over the weekend pushing as high as 110 degrees. Thursday, Friday, Saturday and Sunday could all set high temperature records, according to the NWS.

"If you're outdoors, be sure to stay hydrated, take frequent breaks and seek shaded areas," the NWS says.

Throughout the heat wave, Dallas' Office of Emergency Management will have cooling stations open at the Martin Luther King Community Center, the West Dallas Multipurpose Center and Reverchon Park's recreation center. The Salvation Army is also operating three cooling centers throughout the city.
KEEP THE DALLAS OBSERVER FREE... Since we started the Dallas Observer, it has been defined as the free, independent voice of Dallas, and we'd like to keep it that way. With local media under siege, it's more important than ever for us to rally support behind funding our local journalism. You can help by participating in our "I Support" program, allowing us to keep offering readers access to our incisive coverage of local news, food and culture with no paywalls.
Make a one-time donation today for as little as $1.