'The Spark': A Fire Breather's Battles Against Cancer and Mediocrity Reignite Every Other Week 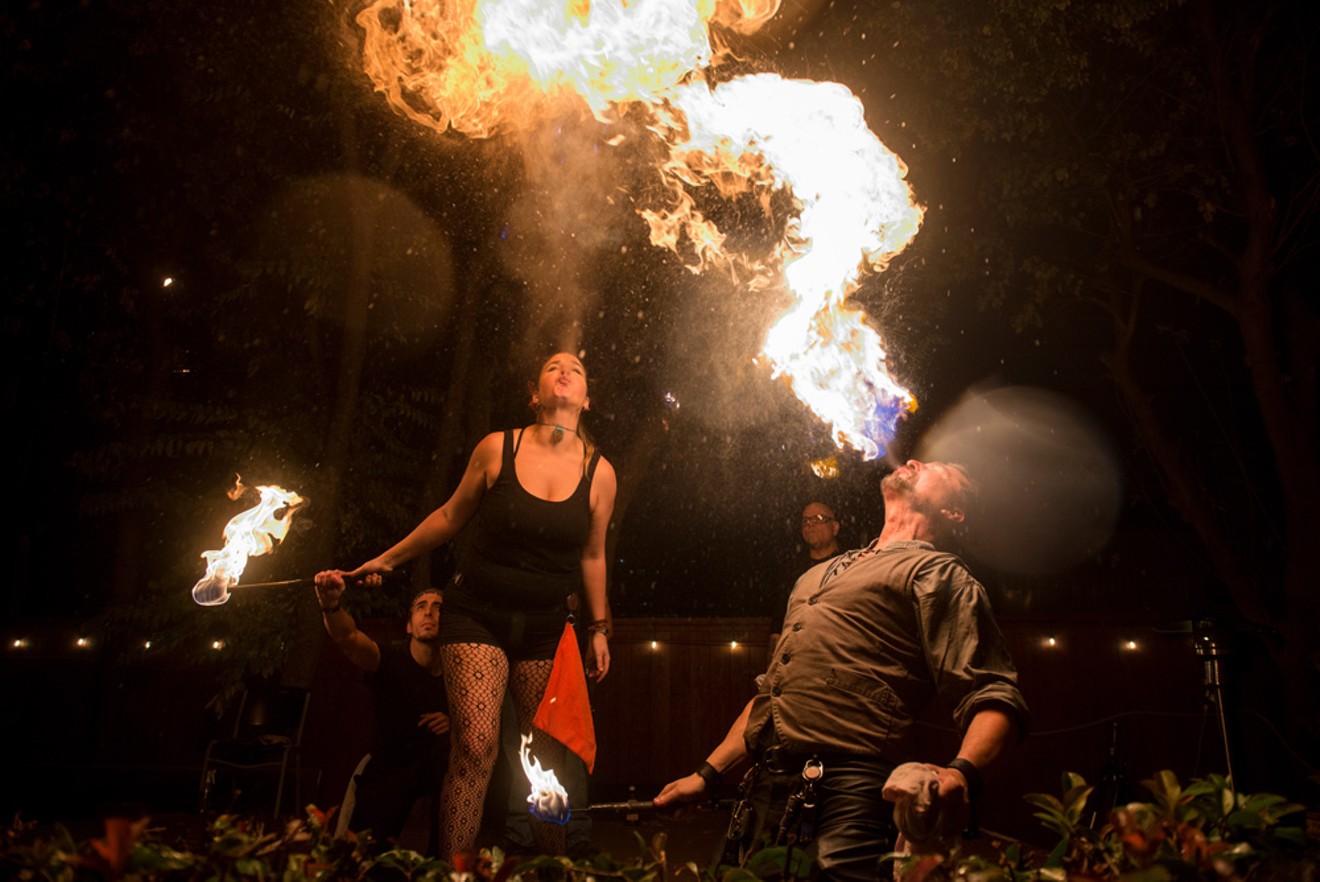 There's a sprinkle of rain falling outside the Green Elephant, a small dive bar near Southern Methodist University, when Draco Pendragon takes the stage. He dresses like a heavy-metal circus ringmaster, clad in black leather pants and a steam-punk top hat, and wields a whip that spouts flames when he cracks it. He opens his mouth and a jet of flame erupts. Pendragon uses his mouth to regulate the stream of flammable fluid to make fiery art.

He says controlling the flames makes him feel "grounded in a way that you've never been grounded before. The stress relief, the emotional release — everything about it is natural, flowing.”
Pendragon's real name is Patrick Thomas, but his fellow performers know him as Papa Dragon. Every other Wednesday, he and other fire entertainers showcase their arcane craft at the Green Elephant, one of the few businesses in Dallas to navigate the local fire code to get the permits needed to host fire acts. One of the requirements includes having a fire marshal on the premises during a show, watching for dangerous situations. The owners pay the fire marshals $250 an hour, making shows too expensive to put on more than every other week.

Patrick Thomas and Jo England breathe fire at the Green Elephant.
Brian Maschino
Thomas has been a fire breather since the 1980s, when he found inspiration from fire-breathing Kiss bassist Gene Simmons. He retired from the stage but in 2013 received a diagnose of Stage 4 throat cancer. His weight plummeted and he lost his teeth, and he says the character of his throat changed. The doctors bluntly told him he would never breath fire again.

“I experienced terrible radiation burns on my neck, internally and externally,” Thomas says. “It was the hardest thing I had ever done in life.”

Surgery at UT Southwestern Medical Center in 2015 helped him beat cancer, but he says teaching his craft to "the fire community" fueled his spirit and gave him purpose as he battled the disease. Former student Hillary Bonner introduced him to the Green Elephant in Dallas. She was the flame effects operator for the drum circle that meets every other Wednesday. Everyone knew her as Kite, and Thomas says she helped him “live again through the fire arts.”

Bonner died in an accident on her way home from a renaissance festival in 2016, when she lost control of her car during a rainstorm. Thomas took over as the flame effects operator at the Green Elephant, and the experienced flame performing artist started training aspiring performers.

“You recognize the spark in someone else, you fan that flame,” Thomas says. “You watch the beauty that will come out of this individual as they connect with this element — what I call dancing with the dragon."