Transgender people gathered at the state capitol to raise awareness. Courtesy of Jess Herbst
New Hope Mayor Jess Herbst and 50 other protesters planned to stand next to public bathrooms on Thursday at the state capitol holding signs to protest budget bill amendments that they claim targeted the transgender community. They had to change tactics, however, when they realized legislators have their own private bathrooms, inaccessible to the public.
They were protesting a slew of amendments that they say collectively serve as a Trojan horse for Lt. Gov. Dan Patrick’s so-called bathroom bill, Senate Bill 6. The amendments, included in more than 400 amendments attached to the bill, include the language “or to allow or enable a man to enter a women’s restroom facility or a woman to enter a men’s restroom facility.”

Herbst claims the bathroom bill and similar amendments will simply backlog the criminal system with people being misidentified. “Transgender men look like men,” Herbst says. “You give them testosterone, and they grow a beard and muscle [like men].” 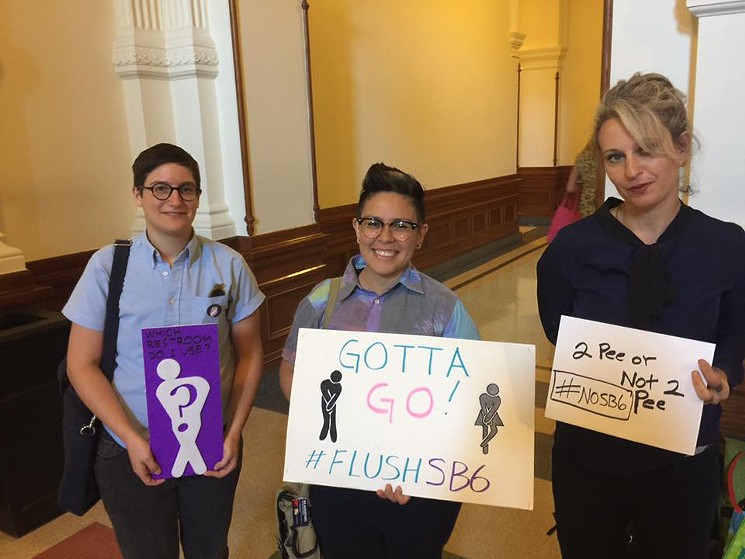 Transgender people gathered at the state capitol to raise awareness
Courtesy of Jess Herbst
On Thursday, the protesters abandoned the bathrooms and instead took a position in the entryway to the House chamber, an area filled with activity as state pages rush to and fro with documents for representatives.

Herbst says it turned out to be more effective because they were able to speak with representatives and people meeting with them, including a large group of Republican women wearing red. “Most were surprised at the existence of trans men, and many left with a change in their stance on the bill,” Herbst says.

In the end, each of the amendments she was protesting had been killed or withdrawn, and the budget bill made its way to the Texas Senate with none attached.

Herbst is hoping for a law that would shield the trans community from being targeted by such amendments in the future. “You can fire me and deny me health care and my apartment. There are no anti-discriminatory laws in most of the United States,” Herbst says. “We really have no rights and no recourse.”