Unable to Get People to Protest, North Texas Neo-Nazis Resort to Stickers and Graffiti 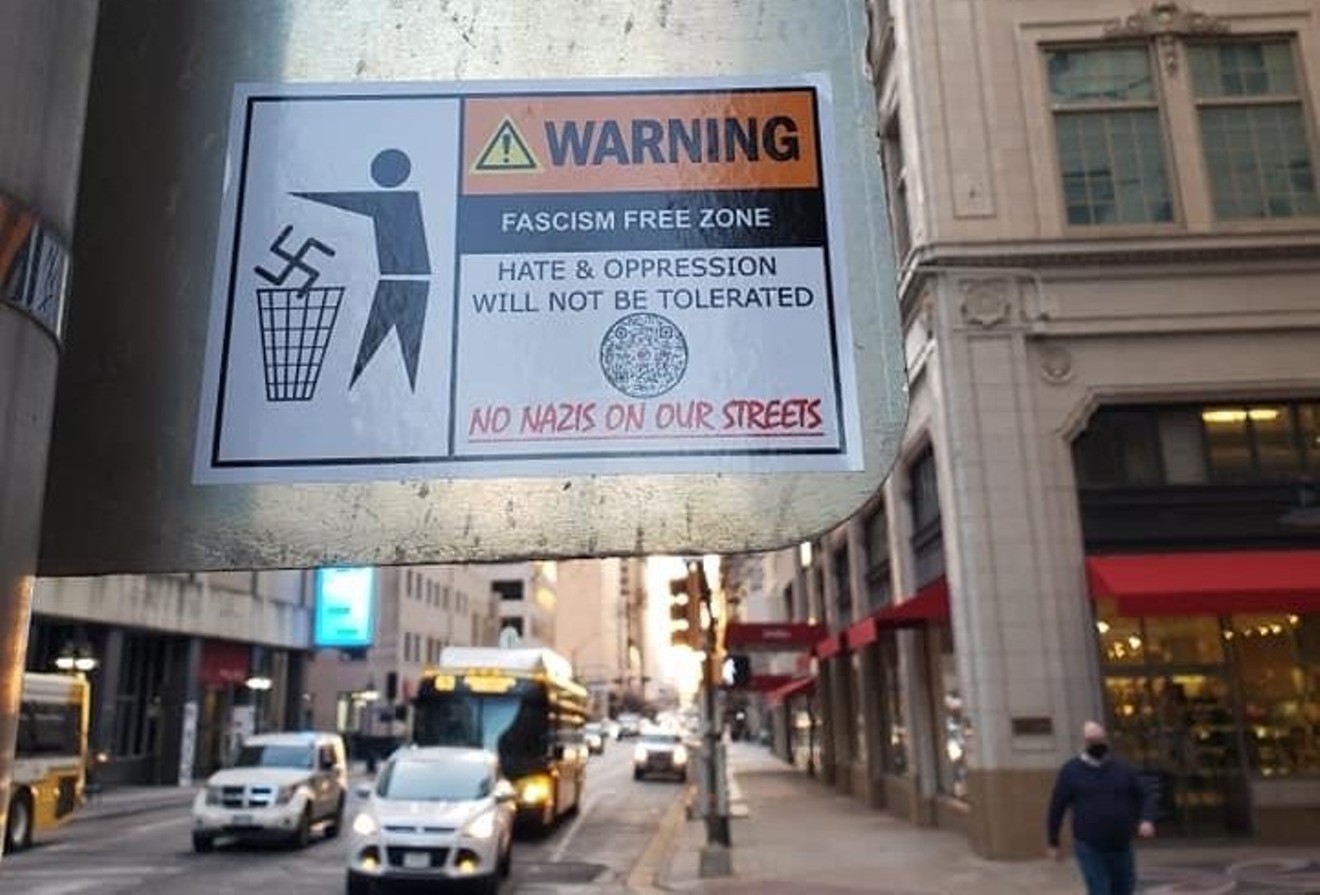 Dallasites are posting these stickers around the city to cover up white supremacist propaganda Courtesy of @ProtestMomDFW
White nationalists and neo-Nazis in North Texas haven’t put on an impressive show of force lately. Last month in Fort Worth, the three or four people who came out to protest under the “White Lives Matter” banner were outnumbered by counter-protesters.

Unable to get bodies in the streets for their cause, consistently outnumbered by anti-racists and anti-fascists, and under the watchful eye of the feds, far-right groups in North Texas have gone back to simply putting up propaganda stickers and spray painting graffiti.

This week, white nationalist groups on the messaging app Telegram posted photos of far-right and racist stickers they’d put on lampposts, walls, crosswalk signs and other surfaces, including in Dallas, Fort Worth and Frisco.

The Telegram channels for the local far-right “White Lives Matter” group and the white nationalist Patriot Front are among those spreading the propaganda.

In Dallas and Fort Worth, Patriot Front spray-painted stencil graffiti that reads “Not Stolen, Conquered,” ostensibly disputing the notion that the genocide of Native Americans was, in fact, bad. Another stencil reads “Reject Poison,” with an X painted over images of a pot leaf, a syringe and pills. (They sound like they'd be a real hit at parties.)

(In the past, Patriot Front has posted flyers urging locals to report undocumented immigrants and has used stickers that say "Deport them all." If we're being honest, we'd rather just deport Patriot Front.)

In Fort Worth, Patriot Front also claimed to have dropped a banner from an overpass, scrawled on it was the phrase “We have not yet begun to fight – Patriot Front.” In Austin, another banner placed over a highway reads “America is not for sale.” In Killeen, yet another says “For the nation, against the state.”

Patriot Front is an openly white nationalist group and was born from the ashes of Vanguard America, a neo-Nazi outfit that participated in the deadly violence that took place in Charlottesville, Virginia, in August 2017. They're easy to make fun of, but some of them are armed and they have a violent history.

On Thursday, similar photos were shared by another white nationalist channel, @WLM_USA_TEXAS_DFW, which is affiliated with last month’s failed “White Lives Matter” rally in Fort Worth.

On a newspaper rack for the local Frisco Enterprise paper, the photos showed stickers that say “There is a war on whites” and “It’s okay to be white.”

On the wall behind that newspaper box is a poster that says “White Lives Matter: Fight White Genocide,” recycling an age-old neo-Nazi conspiracy theory that white people are being subjected to genocide at the hands of immigrants and people of color.

The same stickers were posted on a crosswalk and other spots, although their exact location isn’t clear.

This isn’t the first time white nationalist stickers and graffiti have popped up around North Texas. Back in March, Dallas-area anti-fascists said they were busy defacing Patriot Front stickers around downtown, replacing the neo-Nazi propaganda with stickers that said “Fascism free zone” and “No Nazis on our streets.”

After their rally flopped in Fort Worth last month, the “White Lives Matter” crowd on Telegram floated the idea of another protest on May 8, but it never happened. Now, the group has discussed holding their redo rally on June 5.

“We get it. You’re scared,” the post continued. “But at the end of the day, your absence is indicative of your cowardice. Those who stand up and fight will live — those who refuse to fight do not deserve to live.”

For a group that won't stop banging on about their supposed superiority, they don't seem all that sure of themselves.
KEEP THE DALLAS OBSERVER FREE... Since we started the Dallas Observer, it has been defined as the free, independent voice of Dallas, and we'd like to keep it that way. With local media under siege, it's more important than ever for us to rally support behind funding our local journalism. You can help by participating in our "I Support" program, allowing us to keep offering readers access to our incisive coverage of local news, food and culture with no paywalls.
Make a one-time donation today for as little as $1.