The Far-Right ‘White Lives Matter’ Rally Flopped in Fort Worth. Now, They Want a Redo. 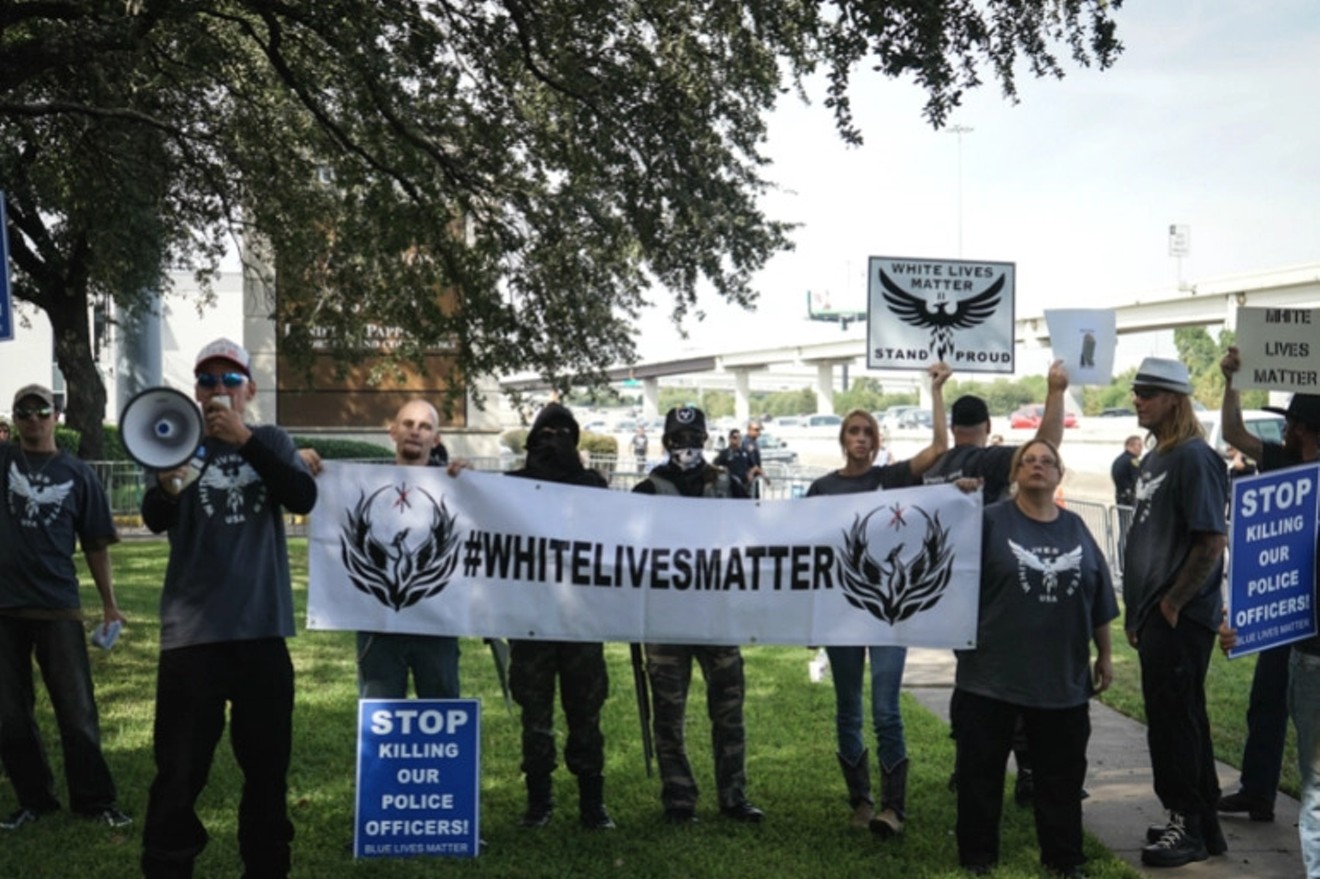 After the rally flopped, a female organizer sent a few voice notes to the Telegram group used to organize the event. She wasn't happy about the turnout, describing her fellow white people as "fucking pussies," according to one journalist.

It wasn't clear if any of the rallies planned in Houston or New Braunfels got any traction at all. Around the country, protests from New York to Huntington Beach either brought out only a handful of people or attracted no supporters at all.

Failure or not, the self-described master race is planning a redo next month.

Ahead of the first rally, the Texas-based White Lives Matter channels on the messaging app Telegram went to great lengths to insist they held no fascist views and that they were merely concerned with the welfare of white Americans. This time around? Not so much.

In a post announcing rallies for 9 a.m. May 8, the WLM_USA_TEXAS channel regurgitated some age-old white nationalist propaganda: the belief that people of color and immigrants are engaged in a highly organized plan to systematically replace the white population.

“Any moment you publicly spend talking about anything else other than White Replacement is a moment when you are burdening the future of our Children,” they wrote [sic].

Elsewhere, the channel shared a quote by white nationalist icon David Lane, the so-called “14 Words” often used in neo-Nazi propaganda. Never heard of it? It's a quaint little phrase that goes like this: "We must secure the existence of our people and a future for white children."

In a channel dedicated to White Lives Matter rally organizing in the Dallas-Fort Worth area, the administrators admitted that the first protest didn’t go “exactly as planned,” but they insisted that it “created an atmosphere consistent with white unity.”

Still, the administrators begged fellow white people to actually get on board with their cause and show up this time. “All of us have a role to play in this mass awakening,” they wrote.

Ahead of the last round of White Lives Matter rallies, anti-fascist activists infiltrated their Telegram networks, lured them to fake accounts and helped sabotage the events before they ever happened.

“This time will be different – more rigorous vetting and serious commitment to showing up in solidarity,” WLM_USA_TEXAS_DFW said.

In a later post, the group shared a propaganda video that seemed to play up the notion that a race war is taking place in the country. Along with a dramatic electronic music soundtrack, videos from Pride parades and clips from Black Lives Matter protests, the video had the caption: “Stand up white man [sic].”

“The time for debate is over,” the caption said. “Voting will not remove them. They want you dead. Defend your race.”

Like last time around, the Houston channel was a touch less shy about their neo-Nazism. That channel shared a video called “Adolf – The Unifier,” which starts with an image of a Nazi flag waving in the breeze. The video goes on to praise German Nazi leader Adolf Hitler.

In 2016, several white nationalist groups rallied around the White Lives Matter banner and held protests in Houston and Austin, including armed demonstrations outside a Houston NAACP and the Anti-Defamation League’s local office.

There’s good news, though. In the Dallas-Fort Worth channel, only six people have replied to a post gauging interest in the event.
KEEP THE DALLAS OBSERVER FREE... Since we started the Dallas Observer, it has been defined as the free, independent voice of Dallas, and we'd like to keep it that way. With local media under siege, it's more important than ever for us to rally support behind funding our local journalism. You can help by participating in our "I Support" program, allowing us to keep offering readers access to our incisive coverage of local news, food and culture with no paywalls.
Make a one-time donation today for as little as $1.