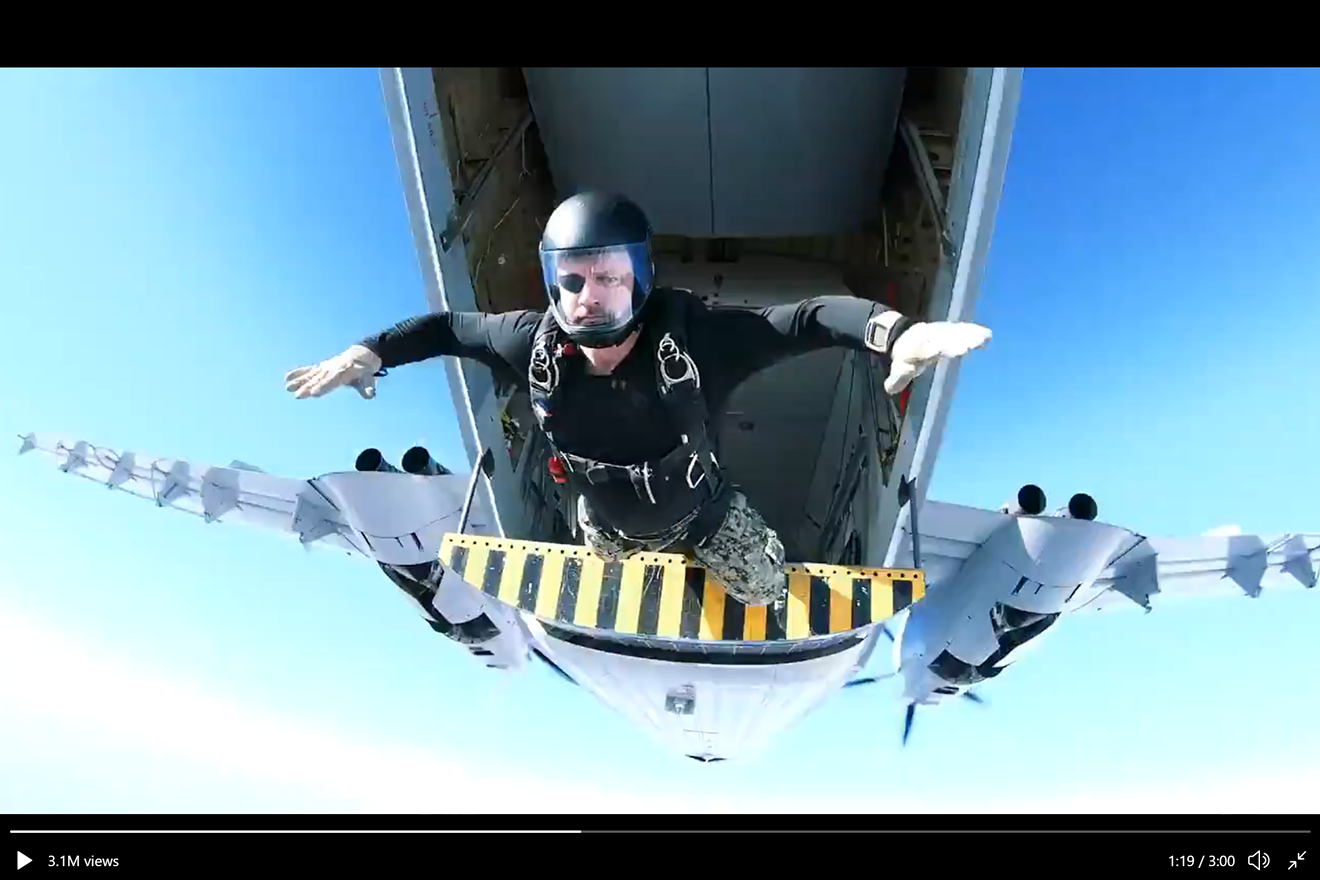 Sunday, the Houston Republican aired the sequel to “Texas Reloaded” that no one asked for: “Georgia Reloaded.” In it, he petitions viewers to help the Republican effort in that state’s upcoming senatorial runoff races, which are scheduled for Jan. 5. There aren’t any explosions this time around and the production values took a big hit, but the Texas congressman still parachutes out of a plane to fight big, bad Antifa.

Those unfamiliar with Crenshaw’s association to politics may have assumed his latest video is a screen test for a knockoff Mission Impossible flick. Although he’s sworn to represent Texas’ interests in Congress, Crenshaw certainly seems to have enough free time on his hands that he can pretend to be Tom Cruise.

The 3-minute video opens in Houston at “Crenshaw Victory Party” on Nov. 3, the day he won reelection for Texas’ 2nd Congressional District. Crenshaw waxes poetic about the “American story” before being interrupted by a man in black who whispers in his ear; he then excuses himself from the fanfare.

The Texas congressman soon learns from the disembodied voice of a chief intelligence officer — who has a British accent — that the country is under siege by “far-left activists,” including Vice President-elect Kamala Harris and U.S. Rep. Alexandria Ocasio-Cortez. (Apparently, the old white man at the top of the ticket, President-elect Joe Biden, is far less of a boogeyman to the ideological right than those two female politicians of color.)

While Crenshaw strips from his button-down, his cronies inform him that Georgia Sens. Kelly Loeffler and David Perdue need his help. If both lose their reelection bids, the Democrats will gain majority control of the Senate with help from Harris as the tiebreaker.

Soon, Crenshaw’s falling from a plane again, as he did in the "Reloaded" series' first installment. During his descent, his British liaison compliments his “form” before notifying him of nearby antifascists. Instead of steering clear of their path, though, the brave patriot elects to beat up some progressives.

“Where is that pirate?” one antifascist in a balaclava asks, sitting in a parked car on a country road.

“Arrr,” the other replies.

“I don’t even know why I’m so angry, you know?” the first one says.

“Oh, the news told us to be,” the other guy responds.
Before these unsuspecting antifascists know it, though, Crenshaw lands on the hood of their car, prompting them to shriek in fear. The congressman then Hulk-punches the car’s windshield before the screen cuts away to text urging people to show up to a Georgia GOP rally on Dec. 21.

Naturally, Twitter had a field day with this three-minute slow-moving train wreck.


dude just play call of duty like a normal person

“Georgia Reloaded” boasts some major "fiddling while Rome burns" energy; while Texas rapidly approaches 24,000 COVID-19 deaths, one of its congressmen is making B-grade political advertisements for another state’s runoff elections.

Then again, Texas Republicans sure do seem to care a lot about the Peach State these days.

Friday, the U.S. Supreme Court swatted down Texas Attorney General Ken Paxton’s meritless lawsuit attempting to overturn election results in Georgia and three other states. Crenshaw, along with 125 other House Republicans, backed the move, one that Pennsylvania’s attorney general condemned as a “seditious abuse of the judicial process,” according to The Hill.

The video’s release also comes on the heels of an explosive allegation against Crenshaw. Friday, Salon reported that the Texas lawmaker had teamed with the secretary of Veterans Affairs to smear a Navy veteran who had claimed she was sexually assaulted at a VA hospital.

“Georgia Reloaded” is certainly a distraction, albeit an unwelcome one, from Crenshaw’s week of bad press. It’s also a sensorial assassination perhaps summed up best by a Twitter user who goes by the handle @barejear.