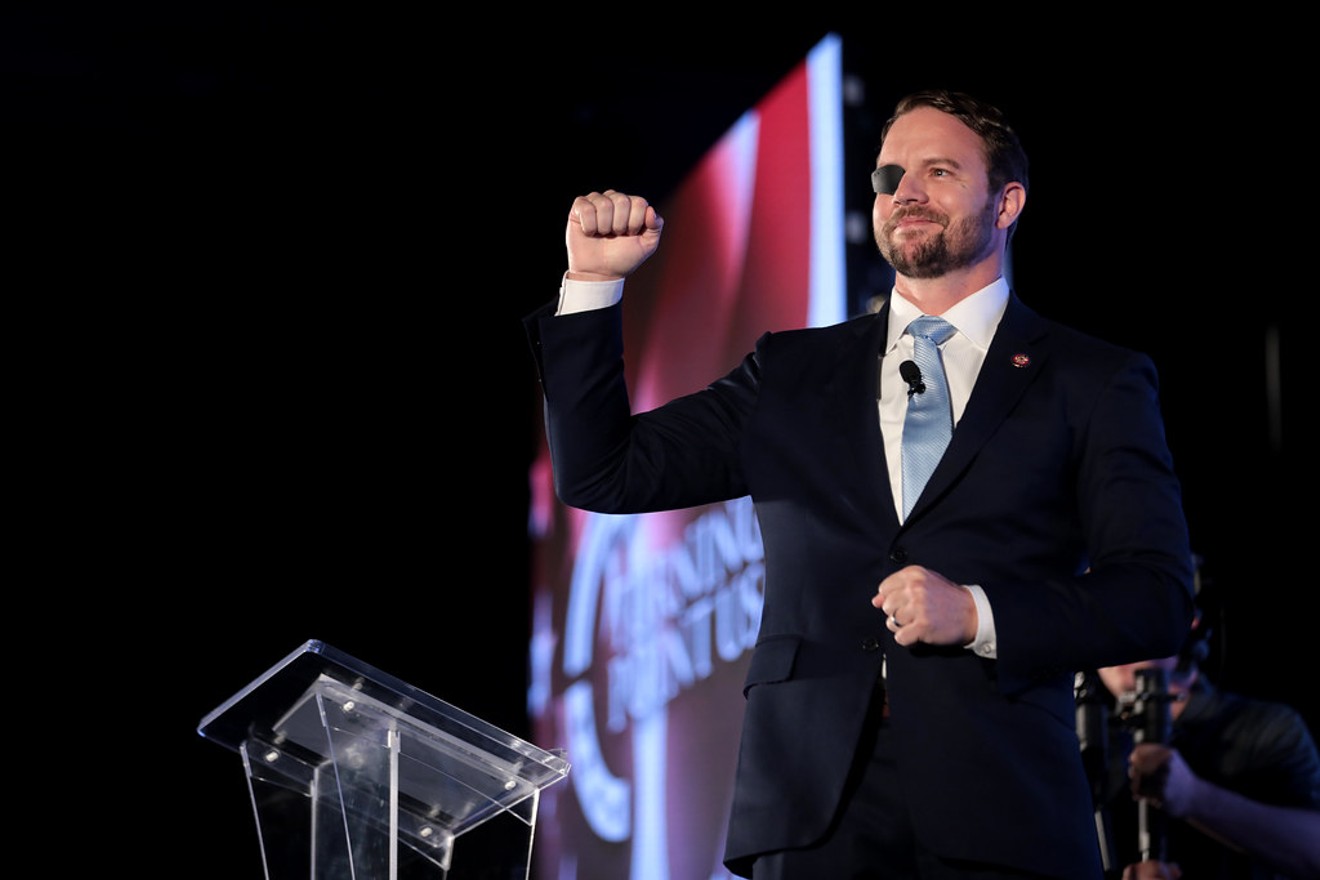 U.S. Rep. Dan Crenshaw insists he's a man of faith. "Dan Crenshaw" by Gage Skidmore is licensed under CC BY-SA 2.0
During his time as a Navy SEAL, Dan Crenshaw fought overseas. But now, back home in Texas, the 37-year-old GOP congressman is apparently sparring with young girls.

At a Montgomery County Tea Party event Monday night, Crenshaw was asked by a young female audience member to explain comments he made on a podcast. In the March 2020 episode, he seemed to compare Jesus Christ with a fictional hero, Superman.

Next, she addressed the congressman directly: “I can't wrap my head around this."

"Well, I’ll help you," Crenshaw curtly replied. "Put a period after the word 'Jesus' and don't question my faith.”

Crowd members weren’t too pleased with Crenshaw’s diss, which elicited jeers and “boos.”

From there, Crenshaw attempted to qualify his knee-jerk jab, saying that in the quote in question, he never claimed Jesus wasn’t real.

“Is he the son of God?” one attendee interjected.

Crenshaw also accused the speaker of twisting his words out of context, a move he said “is not very Christian.” From there, somewhat confusingly, onlookers screamed “let’s go, Brandon!” — Republican-speak for “fuck Joe Biden.”

Following the Montgomery County event, a clip of the terse exchange went viral on social media. Some speculated that the girl with whom Crenshaw had argued was 10, but others claimed she’s actually an 18-year-old volunteer for one of Crenshaw’s primary challengers, Jameson Ellis.

Regardless of her actual age, jokes soon flowed from the idea that Crenshaw had bickered with a kid. One meme posted by Republican strategist Seth Weathers shows Crenshaw as Batman striking Robin.

The exchange between Crenshaw and the speaker was certainly "awkward," said Dr. Cal Jillson, a political science professor at Southern Methodist University. Politicians should try to speak to a wide range of people in language they can understand, and "you just don't talk to an 11-year-old girl the same way you do" someone who's 40 or 70.

If the young speaker is indeed 10 or 11, her question was fairly refined, Jillson said. There's a chance that her parents helped her to dress it up a bit, although there's no way of knowing that for sure.

“I know what students sound like," he said, "and the answer was not all that crafty or effective for an adult politician."

This isn’t the first time Crenshaw has caught flak from the public. In August, he was called a “RINO” after saying Republicans are kidding themselves if they think the 2020 presidential election was stolen.

We had some questions for Crenshaw about the latest heckling, which we forwarded to his people. They didn’t respond, though, so we’re posting them here in case any of you plan to attend his next speaking engagement.

1. Here’s the quote the girl was referring to: “The important thing here is we have societal hero archetypes that we look up to. Jesus is a hero archetype. Superman is a hero archetype. Real characters, too. You could name a thousand, you know? Rosa Parks, Ronald Reagan. All of these people embody certain attributes that the American people think, 'This is good.'” Still, you tried to say the girl was twisting your words out of context. How so?

2. Superman is a fictional hero. By listing Superman and Jesus ahead of Ronald Reagan and Rosa Parks, your wording seems to imply that the former two are not, in fact, “real.” Can you see why someone would read it that way?

3. If Jesus is indeed a hero akin to Superman, would he belong to the Marvel or DC universe? Why?

4. Many have condemned the way you talked to the person asking the question. Is that how you speak to all constituents with whom you disagree, or just young girls?

5. What’s your opinion on the Establishment Clause?

6. After getting booed and “Let’s Go Brandon”-ed, how did the rest of the night go? Do you think you won over any voters?

7. What do you think Jesus would say about gerrymandering?

9. What’s your favorite Bible verse, or is it too personal?

Crenshaw probably won’t care for these questions, judging by how he reacted to that 10- (or maybe 18-) year-old speaker. Then again, as one of the preeminent leaders in the war on cancel culture, maybe ol’ Crenny’s skin will have thickened before his next challenge.
KEEP THE DALLAS OBSERVER FREE... Since we started the Dallas Observer, it has been defined as the free, independent voice of Dallas, and we'd like to keep it that way. With local media under siege, it's more important than ever for us to rally support behind funding our local journalism. You can help by participating in our "I Support" program, allowing us to keep offering readers access to our incisive coverage of local news, food and culture with no paywalls.
Make a one-time donation today for as little as $1.