A New Way to Talk About Black Urban Poverty, a Promise of Action and Hope

What stops us cold, every time we try to talk about murder and social dysfunction? Brian Sevald
We struggle, strive, scrape our shins and freeze our toes to see what’s on top of the cliff of urban poverty. Once up there, we all see the same thing. And we all shrug and say, “I am not seeing this.”

What we don’t want to see is race. More pointedly, we can’t acknowledge that extreme urban poverty and the dysfunction flowing from it involve very poor black neighborhoods. Saying it out loud, we fear, will sound like racism. Nobody wants to be that guy.

In this city we are struck dumb by fear, guilt, confusion, mistrust and a long legacy of racism. If we could find a way out of our silence, a way to talk, we could do something.

Right now and right here, an exciting new idea is emerging about how to talk about these issues in a way that is not racist. It’s a way to actually do something. But the first thing we have to acknowledge is that urban black poverty is unique.

In his 2014 piece in The Atlantic, “The Case for Reparations,” Ta-Nehisi Coates quotes LBJ in 1965 at Howard University, saying, “Negro poverty is not white poverty.” The research shows that LBJ’s maxim is only more true today than ever.

In his book, Stuck in Place, Patrick Sharkey uses solid comprehensive research to show that black children born to the poorest and most segregated urban neighborhoods live in a world that white people simply don’t know. Basically, no white child in this country is born to a neighborhood at the same level of poverty that greets almost a third of black children at birth.

It gets worse. The civil rights movement and the broadening of the culture have enabled a great many ambitious, hardworking black families to overcome great odds and escape the bondage of poverty. But that journey has been largely up and out — out of the segregated urban ghetto, leaving behind a stranded population of people who, for whatever reason, did not get out. And now they have stayed in place for generations, surrounded by people who do not know how to get out.

Sharkey writes, “The problem of urban poverty in the post-civil rights era is not only that concentrated poverty has intensified and racial segregation has persisted but that the same families have experienced the consequences of life in the most disadvantaged environments over multiple generations.

If our only goal is to deny responsibility and shut off compassion, then I suppose we could say it’s the fault of those who are left behind that they never escaped. But what does that do for the infant who, through the lottery of birth, is carried like a wind-blown spore to the ghetto instead of the gold coast? And if we were even intelligently selfish, wouldn’t we ask ourselves how it helps us to maintain this cross-generational cauldron of dysfunction in our midst?

As it turns out, Coates in his Atlantic piece six years ago, gave us the one word powerful enough to part our muted lips, and that is reparation. If we are talking about restitution rooted in historic cause, then all of a sudden speaking about the reality on the ground today is no longer racist profiling but confession. And it is by that confession that we are suddenly freed to take action.

Even though the word appears nowhere in the text of their formal resolution, the Dallas school board, led by members Miguel Solis and Joyce Foreman, two years ago adopted a new guiding policy based on the concept of reparations:

“We recognize that the history of the community we serve includes intentional decisions that have led to racial and economic segregation that produced major inequities that persist to this day. … We know that the effects of segregation have had compounding generational consequences for Dallas ISD students … we recognize historical decisions have created barriers that no child should be forced to overcome.”

Based on these precepts, the school board set forward a primary institutional goal of doing things and making things happen to repair the damage done deliberately by its own racist policies of the past. Solis, who has been the intellectual father of this movement on the board, led the way on a number of subsequent reforms and initiatives.

One was a new emphasis on early childhood education. Another was a reform of school disciplinary policy. All have been aimed at carrying out the principles of the racial and socioeconomic equity policy passed two years ago.

And now, at this very sensitive and interesting moment in our history as a city, the school board is talking about a whole new program of reform aimed at healing the ghetto itself. Called “Equity in Bond Planning,” the new initiative, if adopted by the board, would create a fund of as much as $100 million to be spent on capital programs aimed at restoring damaged communities around certain schools.

The money might be used for the construction of buildings to house healthy grocery stores. Or it might create space for clinics or an office building for social services.

The thinking is straightforward. Nothing holds back poor black ghetto students as much as the ghetto itself. The ghetto is not an accident. It didn’t happen naturally. It expresses nothing of the potential of newborn human beings.

The ghetto was created by policy and design and inflicted on generations like a social whip. Therefore it can be un-designed. But just as it took action to create it, it will take action and money to tear it down.

I call this a sensitive and interesting moment in our history because of the sudden sense of crisis around the murder rate. This week the chief of police was lambasted by the City Council in a briefing because she failed to promise to more or less make murder go away — an asinine expectation when crime in general and gun murders in particular are part and parcel of everything we are talking about here. 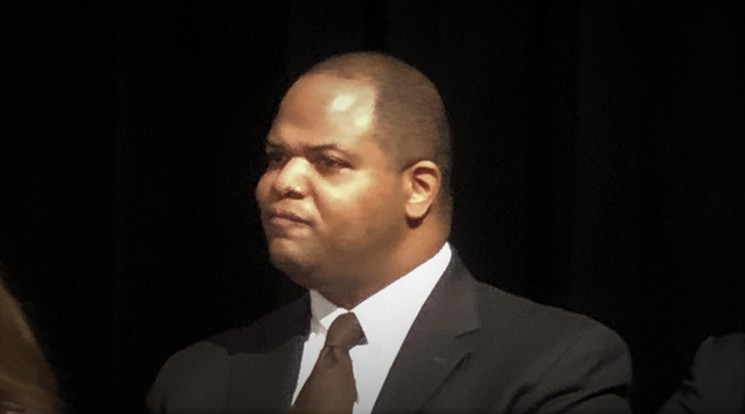 Our mayor lacks the intellectual depth, moral courage and leadership ability to do anything about the murder problem.
Jim Schutze
Does someone really expect the chief of police to solve our problems of crime, violence and social dysfunction? Then whoever holds that expectation needs to tell the chief how to offset the effects of a century and a half of racist policy-making. With cops.

I guess she could send the cops out with orders to arrest all the racists, but she had better think about using house arrest. Maybe neighborhood arrest.

I feel sorry for some of the people who found themselves appointed to the mayor’s task force on crime and violence. There were good heads on that thing, some of whom also served on the advisory body that helped devise the new equity in bonding proposal for the school board.

The contrast between the two work products is highly instructive. The school board recommendation puts money where its mouth is, directing bond money to needy neighborhoods. And, tied as it is to the equity policy passed two years ago, the new bonding proposal is grounded in history and morality.

The mayor’s task force, on the other hand, offers no funding. It proposes fixing up dilapidated buildings, harkening back to former New York Mayor Rudy Guiliani’s “broken windows” reform of the mid-1990s. In a lot of the places we’re talking about, we would need to put up entire fake buildings with fake pedestrians painted on the facades.

Also proposed by the mayor’s task force is the use of special “violence interrupters.” These are agents who would fan out into the community and spot violence as it is just about to happen. I believe those are commonly called snitches. The big problem with snitches is that they get stitches.

Then we have the fall-back position of City Hall, a story I have told way too many times here already — blaming crime and social dysfunction on car washes. Don’t even get me started.

The mayor’s task force came up with a silly superficial set of recommendations while the school district task force, with some of the same people sitting on it, proposed real action rooted in history, aimed at real need and buttressed by a sense of social justice. The difference is leadership.

The mayor flails impotently on the murder and crime issue, insisting that the chief just DO SOMETHING, because he lacks the intellectual depth to see the problem for what it is, and he lacks the moral courage to call it by its name.

We don’t have murders and dysfunction because the chief is lazy. She isn’t allowing it to happen. There isn’t a button she can push. These problems flow from history and intention, from decisions and policies, and none of that will be solved without an equal offsetting intent.

What has stymied us in the past has been our inability for all sorts of reasons to name the ghetto as the cauldron where the toil and trouble are brewed. We never can name it, never do anything at all to repair it, until we acknowledge why it is there.

The concept of reparations, never explicitly named but carefully stewarded by Solis at the school board, is our ticket out of hell. All of a sudden the school board is talking about plunging in and undoing the terrible damage of the past.

What allows them to get there, while the mayor talks about fixing up old buildings and hiring snitches? The school board’s actions over the last several years, from the equity policy to the program reforms to this new bonding proposal, all have been rooted in history and morality. The mayor just wants to snap his fingers.

You don’t snap your fingers at history. You take off your cap, you bow, you roll up your sleeves and you get to work. It starts with a brutal honesty and a beautiful humility.
KEEP THE DALLAS OBSERVER FREE... Since we started the Dallas Observer, it has been defined as the free, independent voice of Dallas, and we'd like to keep it that way. With local media under siege, it's more important than ever for us to rally support behind funding our local journalism. You can help by participating in our "I Support" program, allowing us to keep offering readers access to our incisive coverage of local news, food and culture with no paywalls.
Make a one-time donation today for as little as $1.