In August, Angry Dog Celebrates Their 30th Anniversary. For Now, They're Riding the Dine-In Wave. 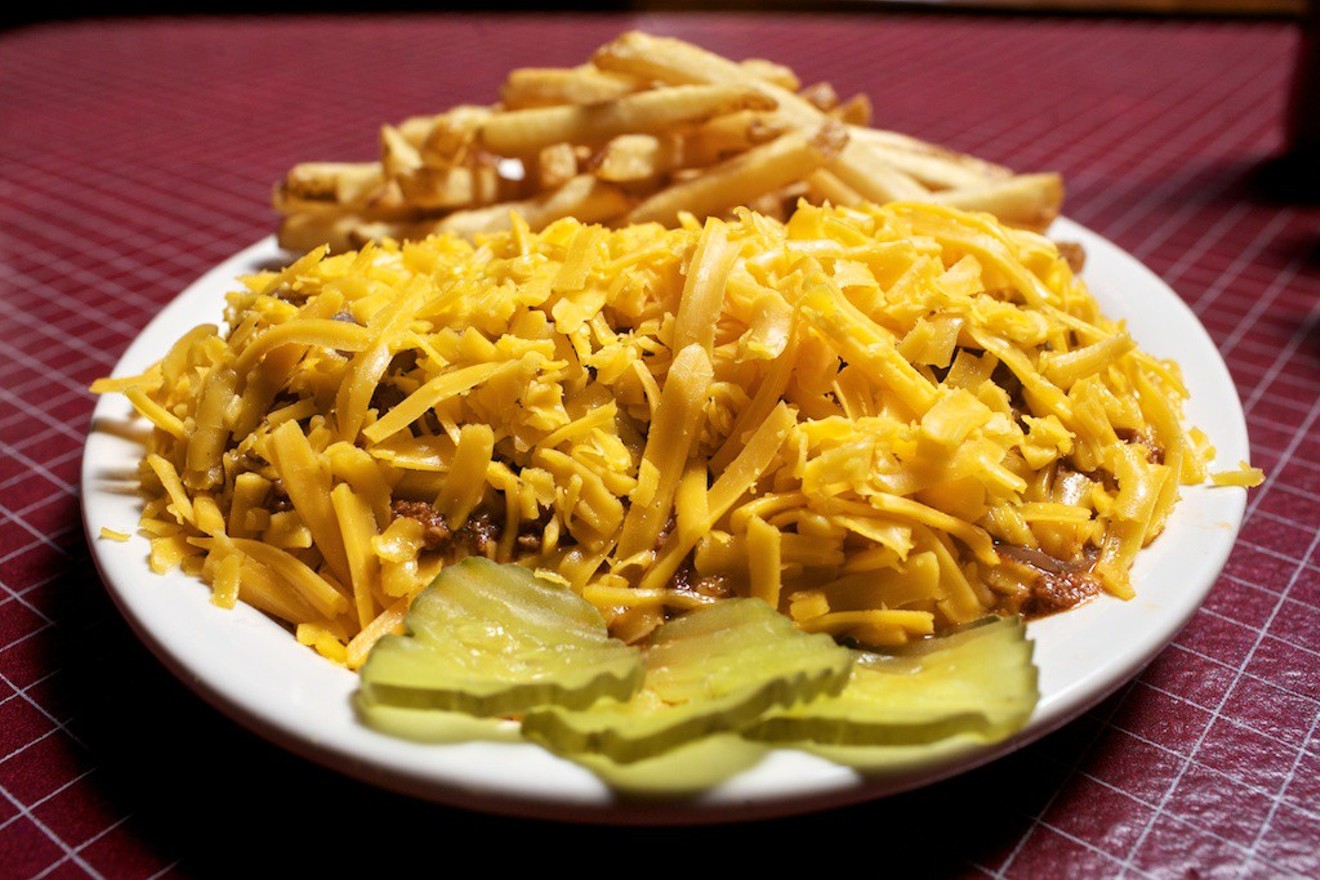 The Angry Dog comes piled high with chili and cheddar. Patrick Michels
In strong winds, the Angry Dog staffer carries the to-go bag to the car window. Construction slices and pounds on Commerce Street — cones and barricades narrow the one-way street down to one lane; nearby they’re replacing a broken water line. On Clover Street, which runs directly behind Angry Dog, more renovations are underway. There are enough obstacles to hobble any business, but Angry Dog chugs along.

“The construction next door was already lots of fun before COVID-19,” says co-owner John Little.

Deep Ellum is a strange sight to behold right now: Some businesses are boarded up, spray paint signs telling the world that they’re closed for the time being, the kind you’d see in a hurricane, immediately next door to another business with doors propped open.

Little and his managerial crew started brainstorming how they’d open back up the moment they’d shut the doors to become a carry-out-only operation. Angry Dog has weathered a few storms: In August, the comfort food-laden bar celebrates its 30th anniversary. They got a mountain of gloves and masks and enough hand sanitizer to fill a tub — the servers keep a spray bottle on them like a pistol on a classic cowboy. Little expected the announcement would have them opening up May 1 at 50% capacity.

“Twenty-five percent was sort of a stunner,” he says. “It was like, OK, well, how is this going to work?”

The challenge to dine-in is in the details: Salt shakers have to go, but cases of salt and pepper packets are disappearing. Angry Dog keeps a custom hot-red salt mix on their tables, which would need to be in disposable packets.

They had to find and purchase the smallest plastic cups with a lid imaginable — they filled each ouncer-cup carefully with salt mix for the reduced dine-in crowd. They slapped up QR codes everywhere. Scanning them will turn your phone into a digital menu. The fried chicken sandwich at Angry Dog, with crunchy strips of fried chicken and lettuce, tomato and pickle on a soft hoagie roll
Nick Rallo
“Most of our menu doesn’t require a knife,” he says — they strategized trashable cutlery. Angry Dog’s food was ready for this. It’s wall-to-wall comfort food — how many places are left offering delivery of a “Cheese Stix Bundle”?

The fried chicken sub, steaming tender chicken armored in a brittle-fried casing, with dill pickle, onion and tomato on a soft bun, is great devour-in-the-car-because-your-car-is-a-restaurant-now food. The cheeseburger, loaded with shredded cheddar, has never been so comforting.

Still, he says, their regulars are happy to have a place to rest and have a cold beer.

“Deep Ellum has been crazy for 30 years — I don’t know that ever has been quite as surreal as it is now.”

Angry Dog, 2726 Commerce St. (Deep Ellum). 214-741-4406. Open for pickup, delivery and limited dine-in service.
KEEP THE DALLAS OBSERVER FREE... Since we started the Dallas Observer, it has been defined as the free, independent voice of Dallas, and we'd like to keep it that way. With local media under siege, it's more important than ever for us to rally support behind funding our local journalism. You can help by participating in our "I Support" program, allowing us to keep offering readers access to our incisive coverage of local news, food and culture with no paywalls.
Make a one-time donation today for as little as $1.
Nick Rallo
Contact: Nick Rallo