Eat This: The Brisket/Pork Cheeseburger at Bet the House BBQ 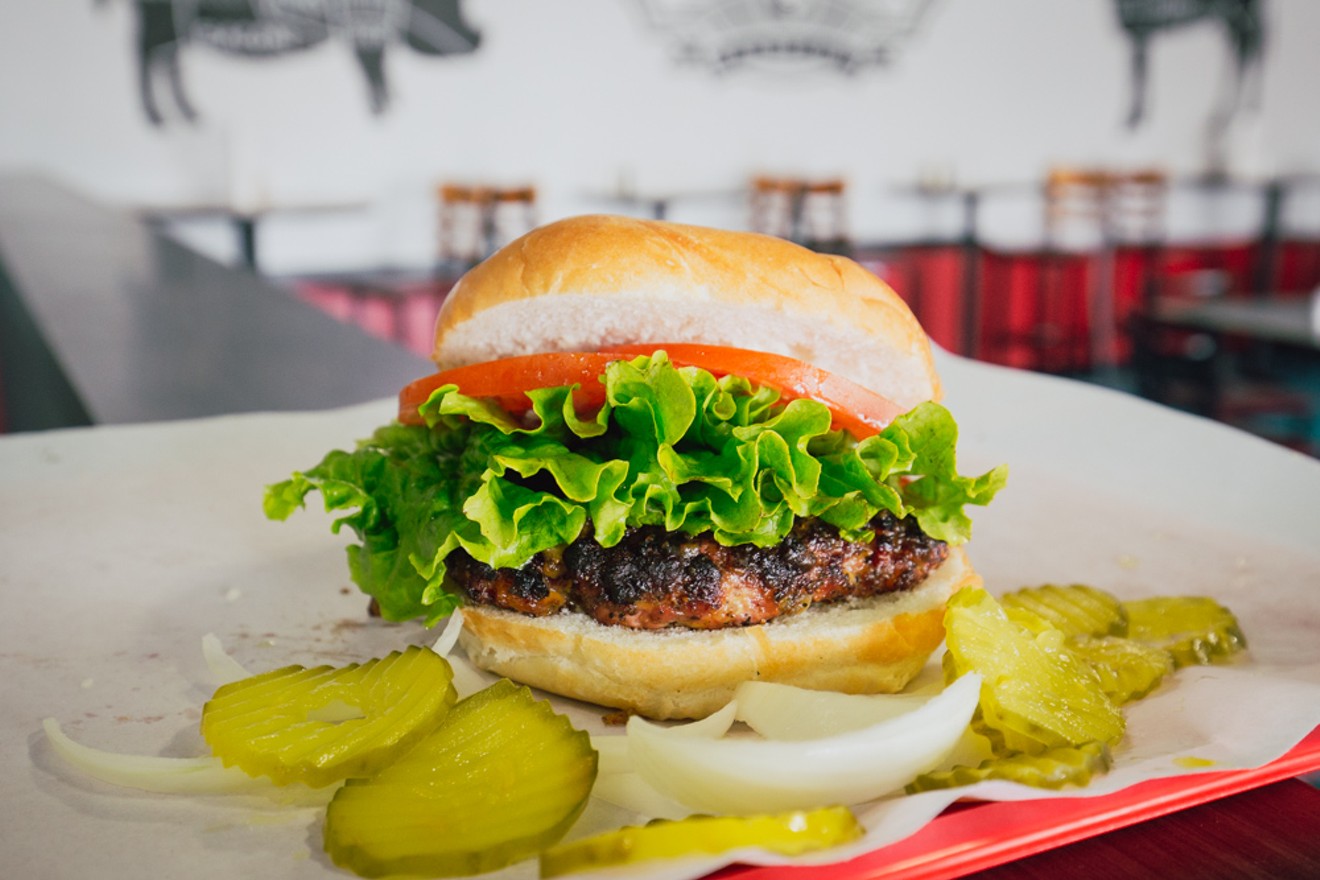 Is this the ultimate barbecue burger creation? Chris Wolfgang
There's already a lot to like at Bet the House BBQ in Denton. Co-owners Shawn Eagle and Cody Smithers just celebrated the four-year anniversary of their barbecue restaurant, and in our humble eyes, it's a staple of north DFW barbecue. While the standards continue to impress, the owners' willingness to experiment draws us back to Denton.

The most recent experiment is the impressive half-pound brisket-pork cheeseburger. You might be wondering how a barbecue joint decides to get into the burger game, and we're right there with you. But as Eagle tells us, it started last year with a desire to put out some better barbecue and tackling the daunting task of making sausage in house.

"We were getting our sausage from Fischer's in Muenster," Eagle explains. "We wanted to change up the recipe a little, but they couldn't help us out because they would need to recertify with the USDA." 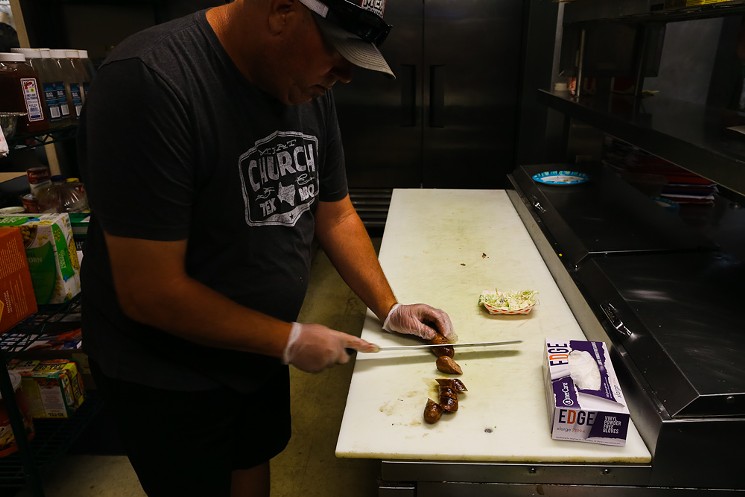 Bet the House co-owner Shawn Eagle slices some of the housemade sausage.
Chris Wolfgang
So Eagle started studying techniques to make his own sausage and talking to his friends in the barbecue business who were grinding and stuffing their own links.

"I didn't want to turn out something that ended up being shit," he says.

Eagle and Smithers bought a meat grinder and a sausage stuffer for the kitchen and went to work. The process was messy at first, but the work paid off, Smithers says.

"We use an 85/15 mix of pork and brisket, and we're able to use our brisket trimmings to make sausage, so it's less waste," he says.

Eagle says they'll crank out their original or jalapeño-cheddar sausage varieties 35 pounds at a time, which lasts just a couple of days. The effort in sausage-making pays dividends in the taste department, and both varieties nearly explode with juicy flavor inside a snappy casing.

JJ Johnson pulls the brisket-pork burgers off the smoker at Bet the House in Denton.
Chris Wolfgang
But with a meat grinder making its home in the kitchen, the wheels started turning for other stuff to grind in house, which led to the brisket-pork cheeseburger. The meat mix for the burger — evenly split between brisket and pork shoulder — is coarsely ground before the same high-temperature cheese that goes in the sausage gets mixed in.

"I mix some salt and pepper in the grind. Then once we make the patties, I hit them with a little Meat Church rub," Eagle says. Then it's off to the smoker.

Given the pork content, the safe thing to do is cook all the burgers well done, then keep them in the hotbox until ordered. As for assembly, it's straightforward from there. A hefty bun from Ravelin Bakery in Denton is sliced open, and the burger patty gets modestly dressed with some leaf lettuce and tomato. For $9.99 with one of Bet the House's sides, it's a burger bargain that bursts with barbecue flavor.

Want a little extra kick? You can get a burger with jalapeño added to the grind, too. We tried both and can safely declare there are no bad decisions for either of the sandwiches. We dressed ours with a few dill pickles and onions, then a dash of Bet the House's barbecue sauce. Every bite is a smoky-seasoned-cheesy step toward burger nirvana. 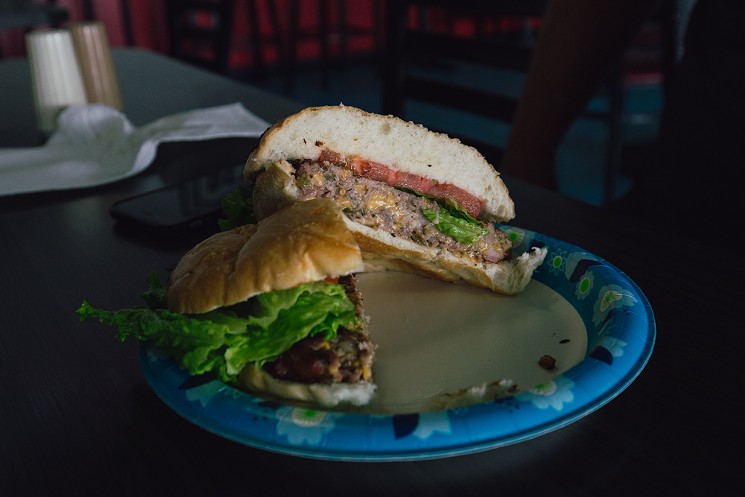 Need a little more kick to your burger? Order the jalapeño-cheddar version. Problem solved.
Chris Wolfgang
Smithers says he and Eagle have done other specials before that start popular, only to have the excitement fade. But since the burgers arrived on the menu a month or so ago, they've been a hit.

"The first day we put them on the menu, we sold out in about 30 minutes," Smithers said.

The burger is a staple every Saturday at the restaurant, along with other barbecue specialties like beef ribs and, on the day of our visit, brisket and coleslaw egg rolls. But as Bet the House's motto goes, they're all in until they're all out. Now's not the time for chance-taking — we recommend you get to Bet the House early to avoid missing out.

Bet The House BBQ, 508 S. Elm St., Denton
KEEP THE DALLAS OBSERVER FREE... Since we started the Dallas Observer, it has been defined as the free, independent voice of Dallas, and we'd like to keep it that way. With local media under siege, it's more important than ever for us to rally support behind funding our local journalism. You can help by participating in our "I Support" program, allowing us to keep offering readers access to our incisive coverage of local news, food and culture with no paywalls.
Make a one-time donation today for as little as $1.