25 Years Later, There Are Fewer Doughnuts and More Breakfast Tacos at Dallas Diner 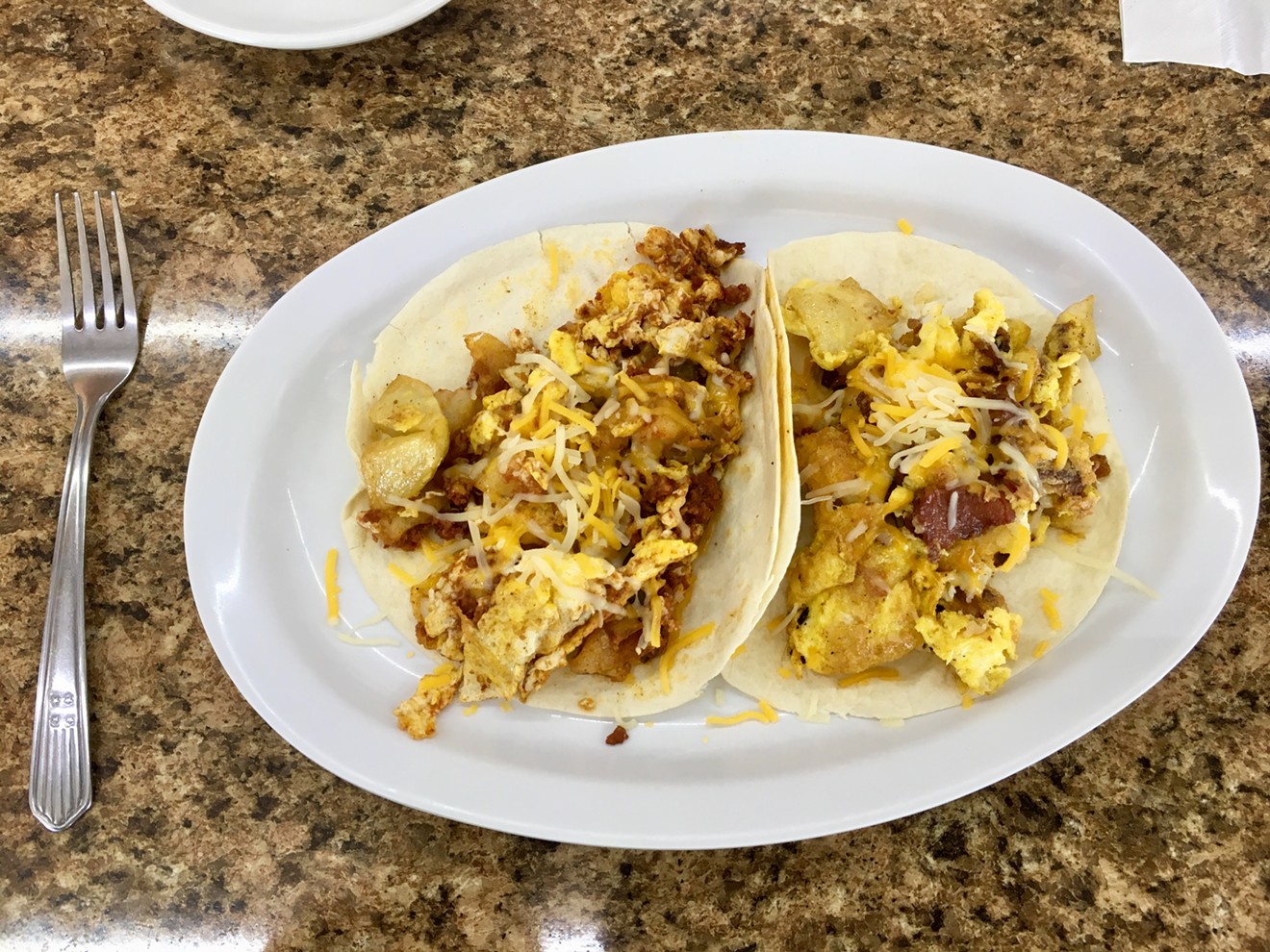 Two breakfast tacos, one with crumbled chorizo and the other with bacon, for six bucks and change. Nick Rallo
About eight years ago, it was the gravitational pull of nostalgia that nabbed Dallas resident Eric Largent. He remembers the doughnuts and the chocolate milk on the walk home from soccer practice. Sometimes, his parents picked him up a bag of doughnuts. Food memories, the ones that surface most often, have a way of growing roots from gut to brain. Smells and flavors are time machines. After Largent was married, he brought his kids to introduce them to the Dallas Diner. It had been an old Dunkin’ Donuts location that was reborn as a local diner. At the time, you could still grab glazed doughnuts and cold milk. So Largent offered the then-diner’s owner — he refers to him only as “Mo” — to run the restaurant’s Facebook page.

“I love seeing something that’s been around for so long ... I used to go to the Dixie House in Lakewood, and now it’s gone,” Largent says. “To see someone try to hold onto something and keep it, and keep it in its original spot, well, that’s pretty cool.”

Twenty-five years and a few low-resolution photos of bacon and eggs later, the Dallas Diner has changed. The doughnuts are gone, now replaced by a few muffins and those fun-size boxes of cereal. Breakfast tacos are a focus, if you’re up and foggy-brained before dawn. Two chorizo tacos are made fast as a plane at takeoff: You’ll find griddled flour tortillas heaped with hard-scrambled eggs, crumbled chorizo (or chopped bacon) salty potatoes and cheese. A too-tiny cup of salsa, made by the fast-chopping kitchen staff, is made in-house.

Inside the Dallas Diner, where doughnuts once lived.
Nick Rallo
At the counter (the best place to sit), you can see the fading remnants of a doughnut shop. The baskets where you might have found a dozen glazed are still there. There’s not much to the current diner. Wood planks armor the kitchen side; two dry-erase boards announce the specials in handwriting. Today’s Dallas Diner menu is mostly what you’d expect: Griddled chuck burgers, pancakes, omelettes and core-satisfying breakfast tacos. Bacon is loaded into the eggs. Chorizo is warming down to your platelets and lightly spiced. Spoon on the salsa so it deluges into the chorizo oil. The tacos are a simple and hot meal. A plate of two breakfast tacos, each loaded with potatoes and shredded cheese, will cost you less than $7.

It’s the kind of place where you can envision slipping into a routine: Picture yourself perched on the stool every Friday morning, pre-dawn, fighting the surge of a Thursday night hangover with chorizo and tortillas. You can settle into this diner. After a minute, the coffee fills right back up as though you hadn’t sipped a drop.

Eric Largent hasn’t been to the diner since it changed ownership a few years ago. He hasn’t tried their breakfast tacos. It’s a sentimental thing.

"It would be nice if they had a few doughnuts,” he says. “Just for nostalgia’s sake.”

Dallas Diner, 10515 E. Northwest Highway (The L Streets)
KEEP THE DALLAS OBSERVER FREE... Since we started the Dallas Observer, it has been defined as the free, independent voice of Dallas, and we'd like to keep it that way. With local media under siege, it's more important than ever for us to rally support behind funding our local journalism. You can help by participating in our "I Support" program, allowing us to keep offering readers access to our incisive coverage of local news, food and culture with no paywalls.
Make a one-time donation today for as little as $1.
Nick Rallo
Contact: Nick Rallo