First Look: The Chef's Table at Cry Wolf Is a Ringside Seat to Deliciousness The chef's table at Cry Wolf Hank Vaughn
Cry Wolf sits in an unassuming little shopping strip in Junius Heights, but the food is anything but unassuming. The blurb on their website touts “a cordial, intimate space focusing on seasonal fare and refined cocktails,” which captures the place well. They’re open 5 to 11 p.m. Tuesday through Sunday, and we decided to make the trek on a chilly Sunday evening.

We made reservations for the chef’s table, which was the last two seats at the end of the bar, but it was much more than bar seating. Chefs Ross Demers and Liam Byres were right in front of us preparing the dishes, and general manager Tim Case was immediately to our left putting in the orders and adding the final touches to the completed offerings before parsing them out to the servers. 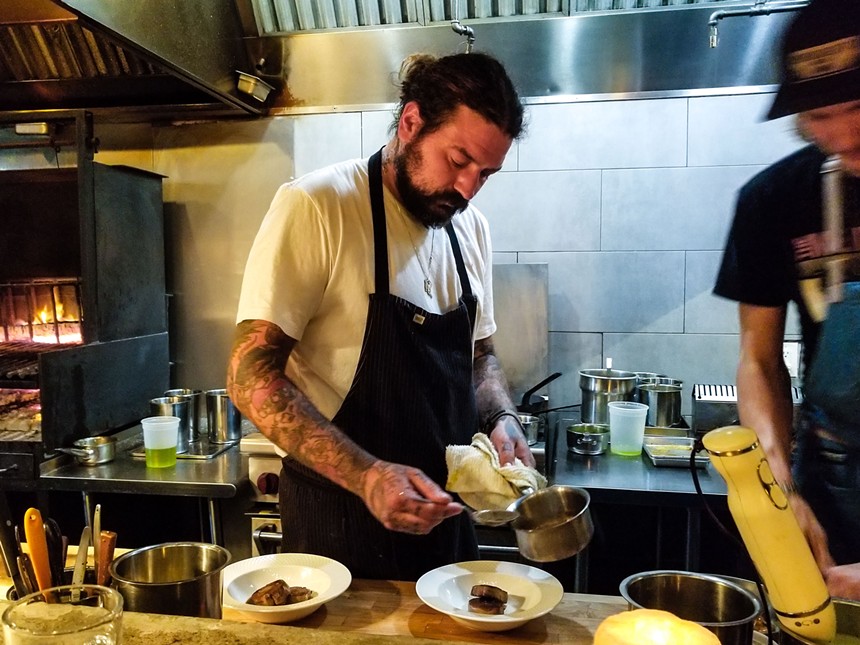 The heart of the cooking space is a wood-burning stove and provided both form and function: a nice, cozy atmosphere as well as imbuing that lovely wood-burned flavor to the food. It was really hot, of course, but that was to be expected. If you choose to sit there when it’s warm you might consider bringing some sunscreen. I can’t imagine what it must be like standing next to that fire for six hours straight, but anything for art, I assume.

We started with a couple of cocktails: an L.L. Smoke and a Rose Nectar Martini, both colorful and good. Next, the waitress explained the concept of the menu to us and how one should view it as a series of plates to be ordered and shared, divided into smaller plates, salads and larger dishes. We ordered two from the smaller and two from the larger sections while we sipped our drinks and basked in the firelight. Sweetbread in a lemon tarragon butter sauce with oyster mushrooms.
Hank Vaughn
The two small plates were served first: 48-hour beef tongue and crispy veal sweetbreads. For small plates, they were on the large side, and extremely good. The tongue had a demi-glace and was adorned with mustard caviar. The sweetbreads in particular had a lemon tarragon butter sauce with oyster mushrooms that we simply could not stop eating. Even once the sweetbreads themselves were safely ensconced in our bellies, we forged ahead using the spoon to finish off every last drop of that sauce. Pappardelle is served with grilled prawns in a sauce with garlic, black trumpet mushroom and parmesan.
Cindy Ju Vaughn
Next up was pappardelle and a serving of grilled prawns. The pappardelle consisted of pasta made fresh daily in-house. It, of course, was perfectly cooked. So often pappardelle is cooked in such a manner that the wide noodles stick together making an unappetizing clump, but not here. This could be eaten alone with butter, but it came in a sauce consisting of garlic, black trumpet mushroom, and parmesan. You might want to order two helpings. Or a gallon.

The prawns were grilled on the wood oven and came with heads intact resting upon roasted rings of squash with Oro Blanco grapefruit and Meyer lemon. They were cooked through just enough, perfectly showing off the charred wood-fired taste. 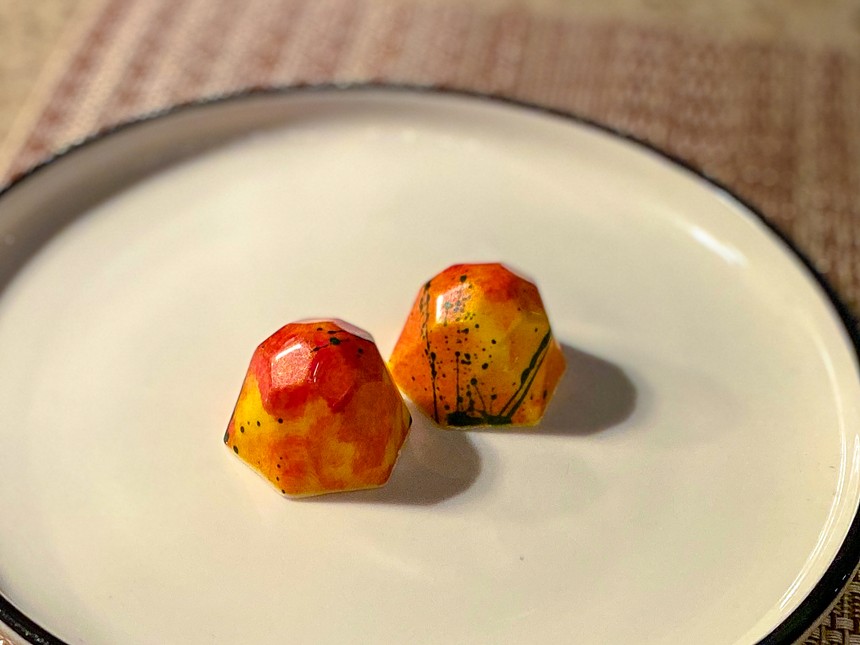 Beautiful cherry bonbons capped the meal.
Hank Vaughn
The meal was over, or so we thought, but then we were treated to a couple of bonbons that amused our bouche at the very end — cherry-flavored little things with a surprise filling. My wife got another cocktail, and the waitress brought me a cup of warm chamomile tea so she wouldn't drink alone.

Chef Demers told us he will be changing up the menu this week (March 14) so after closing for a week to help prepare they will reopen with the new offerings. Also in the works is an additional business venture: a sort of speakeasy that will be attached to the restaurant and called “Whispers” using existing outside space.

The check was brought to us in a fine copy of Hemingway’s The Old Man and The Sea rather than the ubiquitous tacky plastic tray. It was tempting to reread the novella while sitting in the glow of the fire, but that work is overrated and our cats were waiting for us at home.
KEEP THE DALLAS OBSERVER FREE... Since we started the Dallas Observer, it has been defined as the free, independent voice of Dallas, and we'd like to keep it that way. With local media under siege, it's more important than ever for us to rally support behind funding our local journalism. You can help by participating in our "I Support" program, allowing us to keep offering readers access to our incisive coverage of local news, food and culture with no paywalls.
Make a one-time donation today for as little as $1.