The big wins come as a sweet salve for the Parish family members who run Gourmet Royale. Norma Parish (mother to Greg and matriarch of the family) had worked State Fair concessions for 35 years and passed away less than a month ago.

The family, like many other fair food concessionaires, have been looking forward to a happier ending to this year’s fair after last year’s cancellation. Clearly, they’re off to a good start.

James Barrera may have given his sweet dish, The Armadillo, a boost with an impromptu, ukulele-accompanied quick rendition of London Homesick Blues (I want to go home with the armadillo) as he accepted his finalist fry basket trophy. But truth be told, the dish didn’t need any extra credit to win Best Taste in the sweet category.

Nick and Vera Bert of Bert’s Concessions were also honored at the event and were presented with a gigantic trophy for winning Fair Food Madness: The Big Tex Choice Awards Championship. This online, bracket-style voting poll was held last fall in lieu of the annual Big Tex Choice Awards since the fair was canceled. Bert’s Texas Fried FRITOS® Pie topped all of the other prior year fair food winners to claim this title.

Though the event was media-only this year, emcee Karissa Condoianis, spokesperson and senior vice president of the State Fair of Texas, riffed with the celebrity judges and kept the show moving.

Judges who had the unenviable task of choosing the winners from all of this fabulous fair food included 2021 Marconi-award (Major Market Radio Personality of the Year) nominee and KSCS radio personality Michelle Rodriguez. Rodriguez, who’s been with KSCS for 12 years and recently joined the Hawkeye in the Morning show, hasn’t missed a year of the State Fair of Texas (except last year when it was canceled and we all missed it) since before she was born.

Donovan Lewis, The Ticket’s co-host of the World's Most Dangerous Midday Show The Norm and D Invasion also joined the panel. Lewis has been called “the king of the fair” for visiting the fair at least twice a week each year. His strategy of heading to the fair in the evening, sometimes just for dinner and then going home, seems like a smart one.

Television personality and chef/owner of Roots Chicken Shak and newly-opened Roots Southern Table, Tiffany Derry sat beside real-life bestie (or something close to it) chef Uno Immanivong at the judges’ table. Derry will put her judging skills to work again soon on a PBS cooking competition show, The Great American Recipe, which begins filming soon and will premiere next summer.

Immanivong helmed the acclaimed Trinity Groves restaurant Chino Chinatown and now owns Red Stix, with one location near SMU and another opening next month in Farmers Branch. One of the most fun personalities on food TV and in Dallas, Immanivong chose style over comfort for her Big Tex Choice Awards appearance, wearing fashionable skinny jeans for the event. She gleefully made her regret over this choice apparent after judging just three dishes. (Stretchy pants forever!)

Every judge had informative (and sometimes hilarious) commentary about each dish as the competition progressed. They made easy work of another formidable task — making it fun to watch other people eat. If you get a chance to attend the event in future years, the entertainment alone is worth the ticket price, and getting to taste all of the finalist dishes makes it a no-brainer.

Yes, we know, what you really want to know is what the food tasted like and which dishes you should line up for at the fair. In truly unbiased reporting, we say “All of ‘em.” For now, here are the full descriptions and some of the judges’ commentary on the winners.

Deep-Fried Seafood Gumbo Balls by Gourmet Royale
The State Fair of Texas
For the double-award winning savory dish, Greg Parish and family members in the Gourmet Royale venture started with a gumbo recipe that’s been handed down in their family for four generations. The Deep Fried Seafood Gumbo Balls are made with a dark roux, Gulf Coast shrimp, stewed chicken, blue crab meat and andouille sausage. After being battered and deep-fried, the balls are served with a side of roux sauce, chicken-fried okra spears (from Bonton Farms), a miniature bottle of hot sauce and saltine crackers (which you might need, because these tasty bites have a very spicy kick even without the hot sauce.)

“First of all, I love gumbo,” celebrity judge chef Tiffany Derry said of the deep-fried spheres, going on about all the meat and seafood and “crab legs hanging out.”

“They gave me the cutest little bottle of Tabasco,” Derry said. “And then they deep-fried me some okra.” That’s high praise coming from someone whose latest restaurant is literally an homage to Southern cuisine.

Also a fan of the dish, celebrity judge chef Kent Rathbun said, “I can’t wait to come to the fair and buy these.” (If you ever have a chance to get in a card game with chef Rathbun, say “yes,” because he absolutely does not have a poker face. And you won’t have to worry if he gets too far in debt; he can pay you with barbecue.)

“I can’t stop eating it,” Michelle Rodriguez said, and Lewis added, “The kick on this thing is incredible.” Immanivong called it “absolutely amazing.” 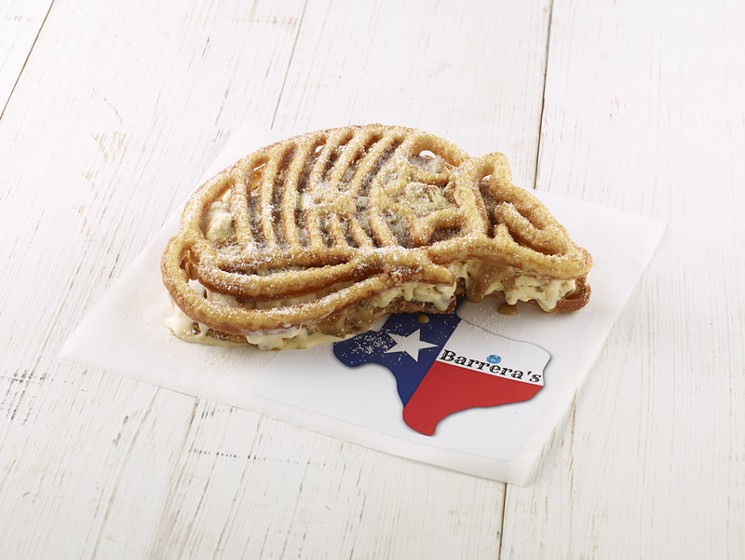 The Armadillo, James Barrera
The State Fair of Texas
The judges had equally high praise for The Armadillo, two deep-fried cookies made with a branding iron and filled with cookie butter semifreddo, which is semi-frozen ice cream, Italian style. Derry and Immanivong got together for a selfie with the dessert.

Immanivong said the cookies were like funnel cake. Rodriguez called them light and delicious, almost reminiscent of a bunuelo. Whatever you call it, you’ll likely agree with Lewis, who said, “That’s tasty, right?! And it’s an armadillo!”

Check back soon for more about what the judges had to say, how we thought everything tasted and pro tips for enjoying the Big Tex Choice Awards finalist dishes and other great food at the fair.
KEEP THE DALLAS OBSERVER FREE... Since we started the Dallas Observer, it has been defined as the free, independent voice of Dallas, and we'd like to keep it that way. With local media under siege, it's more important than ever for us to rally support behind funding our local journalism. You can help by participating in our "I Support" program, allowing us to keep offering readers access to our incisive coverage of local news, food and culture with no paywalls.
Make a one-time donation today for as little as $1.