Review: Encina Is a Sequel Restaurant That Beats the Beloved Original 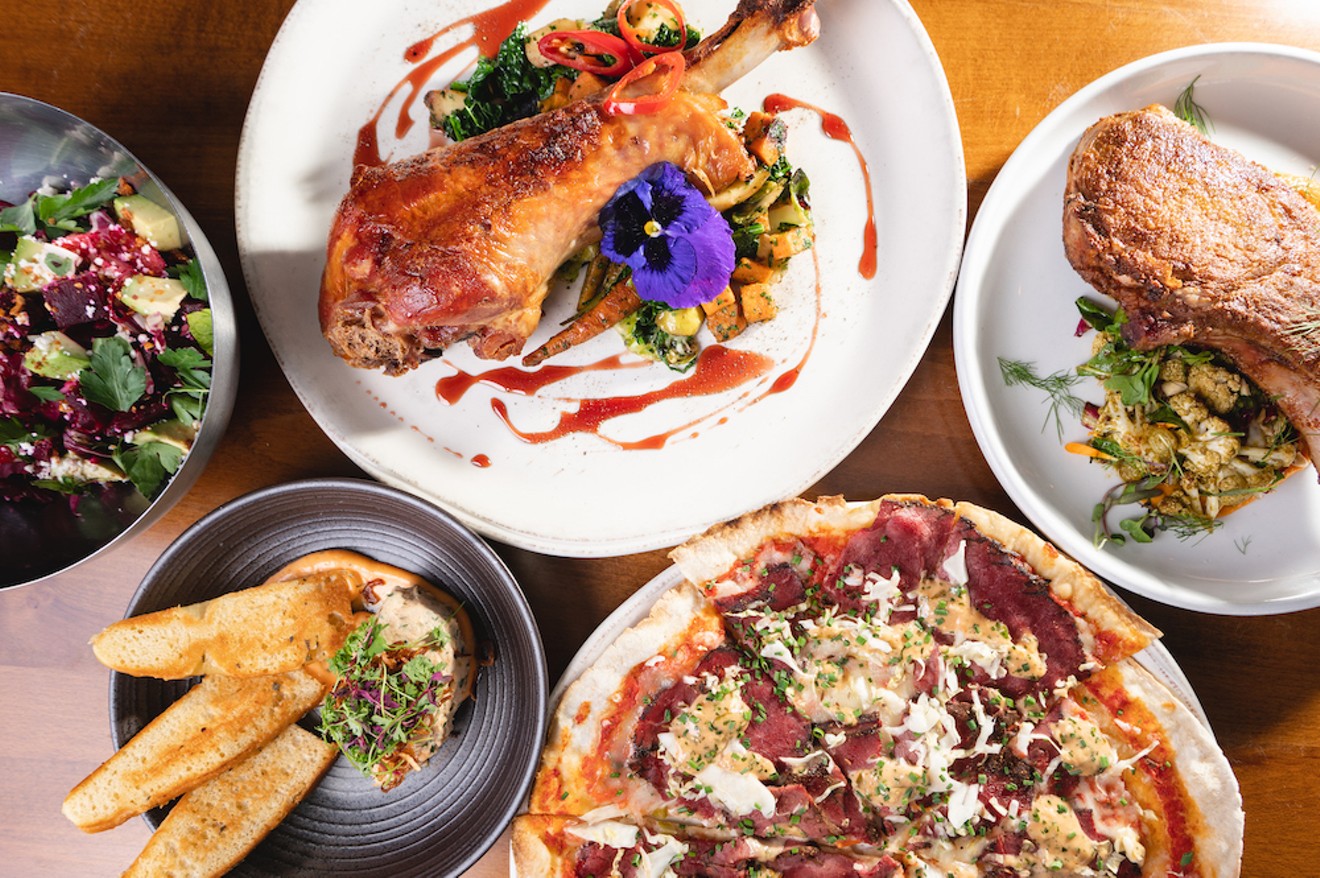 Encina's menu changes frequently, so if you like what you see, go for it. Alison McLean
The pressure’s on at Encina. This new restaurant a few blocks west of the Bishop Arts District opened in October, seven months into the pandemic, with high expectations. It replaces Bolsa, a beloved neighborhood hangout that drew crowds into the same space for almost 12 years.

Now Bolsa is gone, replaced by a sequel kitchen. Encina’s owner, Matt Balke, happens to be Bolsa’s last head chef. Many longtime regulars surely expect Balke to serve up more of the past decade’s hits. So far, he has charted a new course, and the result is a better restaurant than before.

“It was a fun neighborhood restaurant that needed to have a comeback,” Balke says. “We’ve kind of refined it, stepped it up a little bit. Our plates, our ingredients, our wine list is definitely a step up.”

Encina’s menu changes frequently, dependent on the seasons and fresh produce. Dishes are also influenced by the building’s tiny kitchen, a space with just enough room for four cooks, eight burners, a pizza oven and the kind of small, portable deep-fryer that some people have in their homes. To prevent traffic jams, Balke’s team has to bring multiple cooking techniques to the same plate, amping up flavor without using every gadget in the kitchen.

“We just gotta have a lot of bold flavor and different cooking styles so that you don’t clog up the stove,” the chef explains. “It’s sort of just trying to maximize every dollar, maximize every way to make something taste good, to leave a lasting impression.”

Time and again as I ordered takeout from Encina, an odd-sounding menu description paid off in big ways. Roasted fish is normal, but served with pureed broccoli and a lentil relish? It sounds suspiciously healthy ($32). 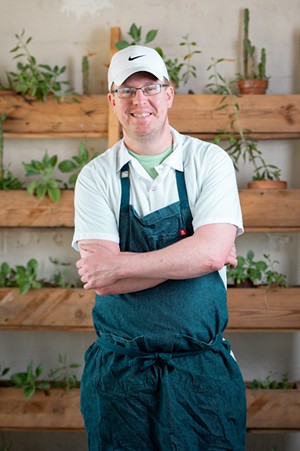 Matt Balke was Bolsa’s last head chef, now his own restaurant Encina occupies the space.
Alison McLean
The lentils are mixed up with big handfuls of parsley and dill in a relish that doubles as a sauce and delivers big on flavor. And the broccoli puree has almost as much butter as greenery, sort of like a riff on creamed spinach, easily saving the plate from tasting like health-food homework.

Pro tip: leftover creamed broccoli — and our takeout container had extra, compared with the amount of fish — tastes fabulous mixed into mashed potatoes the next day. The potatoes will look a sickly pale green, but they will be delicious anyway. (At the time of this writing, the broccoli has reappeared on a new plate with scallops.)

Appetizer items also capture the use-everything thinking that goes into Encina’s food, like cornbread topped with feta cheese ($8), or beef cheek croquettes, which is a classy way of saying fried beef balls ($13). Is this a State Fair special? Will it cause heart murmurs?

No. The meat, slow-cooked and pulled, is mixed with mushroom slices to bulk up on texture without sacrificing flavor. Texturally, the inside is soft and creamy and the outside is crisp, like falafel for carnivores, and the richness is offset by a hearty scoop of spicy pickled chow-chow relish.

ZaLat Pizza has already proven that a Reuben sandwich can be converted into a pizza. But Encina’s got its own twist on the idea, using pastrami instead of corned beef along with sauerkraut and “pickle sauce,” which tastes like an extra-vinegary Thousand Island dressing ($16). It’s all on top of an ultra-thin crust that’s pulled out of the oven just a minute or so before it becomes a cracker.

The pizzas, as with the rest of the menu, change frequently — recently I was tempted by one with kale and blue cheese — and it’s worth pointing out that they’re not called pizzas, either. They’re labeled “flatbreads,” although they tend to be big, round, pie-shaped and packed, for takeout, in good old-fashioned pizza boxes. Balke says the different name is because of the superthin crust.

Encina's Reuben flatbread
Alison McLean
Even brunch finds this kitchen getting creative, thinking outside the Benedict. In February, Balke’s crew was smoking sides of trout to put on a green salad loaded with just about every herb in the garden; I counted fennel, tarragon, parsley and mint ($16). The lightly dressed salad had another star, too: absolutely enormous sections of fresh avocado providing some creamy fat to balance with the smokey fish, herbs and vinaigrette.

The other half of our takeout brunch was a menu item called “English muffins” ($12). The bad news: It was only one muffin. The good news: It came with slices of prosciutto and extra-generous scoops of pureed deviled egg and a light, not-too-rich pimento cheese. For those readers wondering what could be the point of not-rich pimento cheese, I say: to eat more of it.

A pandemic isn’t the only existential crisis that Encina faces. As D Magazine first reported, in a story that reads like a thriller, the restaurant could be sued at any moment by a nefarious napkin company that holds near-monopolistic power over any restaurant that uses tablecloths or needs laundry done. When he switched to a new startup competitor, Balke told the magazine that the napkin cabal charged an extra $2,000 a month just for laundry.

The napkin overlords are enraged and threatening legal action, but they haven’t made any moves yet.

“We’re just sort of waiting in the winds,” Balke says. “Obviously, I hope they just decided to forget about it. Obviously I don’t want to have to pay them $65,000.”

To be honest, I wasn’t a regular at Bolsa or even a big fan. I had good meals there and others that felt half-hearted. Encina’s new menu and rejuvenated creativity is, to my taste, a huge improvement. And that’s based purely on takeout. Balke says that Corey McCombs, overseeing the dining room, has made big upgrades on service, too.

In a few weeks, when those good vaccines start coursing through our bloodstreams, I’ll finally and happily join the regular crowd at Encina. This is the rare sequel that could prove better than the original. 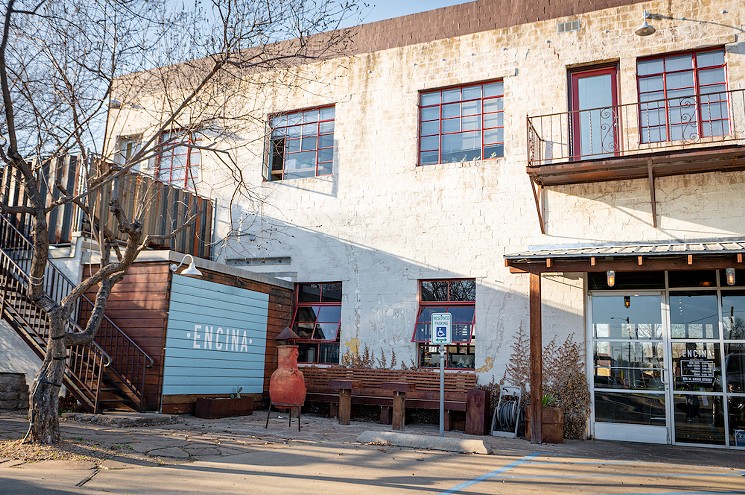 If you know Oak Cliff, Encina's home on Davis Street might be familiar.
Alison McLean
Encina, 614 W. Davis, No. 100. 469-620-3644, encinadallas.com. Open 5-9 p.m. Wednesday and Thursday, 5-10 p.m. Friday and Saturday, 10 a.m.-3 p.m. Sunday
KEEP THE DALLAS OBSERVER FREE... Since we started the Dallas Observer, it has been defined as the free, independent voice of Dallas, and we'd like to keep it that way. With local media under siege, it's more important than ever for us to rally support behind funding our local journalism. You can help by participating in our "I Support" program, allowing us to keep offering readers access to our incisive coverage of local news, food and culture with no paywalls.
Make a one-time donation today for as little as $1.