Andrew's American Pizza Kitchen serves several types of regional pizzas all under one roof. Hank Vaughn
Andrew Albert, his co-owners wife Jennifer and son Justin (and a couple of sisters) are currently in a soft opening of Andrew’s American Pizza Kitchen in Plano. Their previous venture, Picasso’s, grew to three locations in North Texas over 30 years before finally closing a couple of years ago. For this rebirth and restart, they decided to create a restaurant that would offer five different styles of regional pizza: Dallas, Chicago, Detroit, Tavern and New York/Brooklyn. We’re always excited to try new versions of pizza and are on board with the concept of having numerous types under one roof, saving potential half-day road trips traversing North Texas in the constant search for new pizza. So, we dropped in a couple of times for lunch recently to give Andrew’s a try.

Lunch specials include a smaller version of the pizza along with a choice of soup or salad for $14, which allowed us to sample two different styles of pizza over two different lunches. Doing the math, that’s four pizza styles ordered out of the five, but some sacrifices had to be made in the name of my waistline.

Lunches come with a choice of soup or salad; lasagna soup and Caesar salad are pictured.
Hank Vaughn
We were curious as to what was considered “Dallas pizza,” and learned that this is what they call the type of pizza that was served at the late Picasso’s: basically, your standard Neapolitan-style pizza that offers a butter crust option. This, then, was the style we omitted, settling on Chicago, Detroit, “Tavern,” and New York. 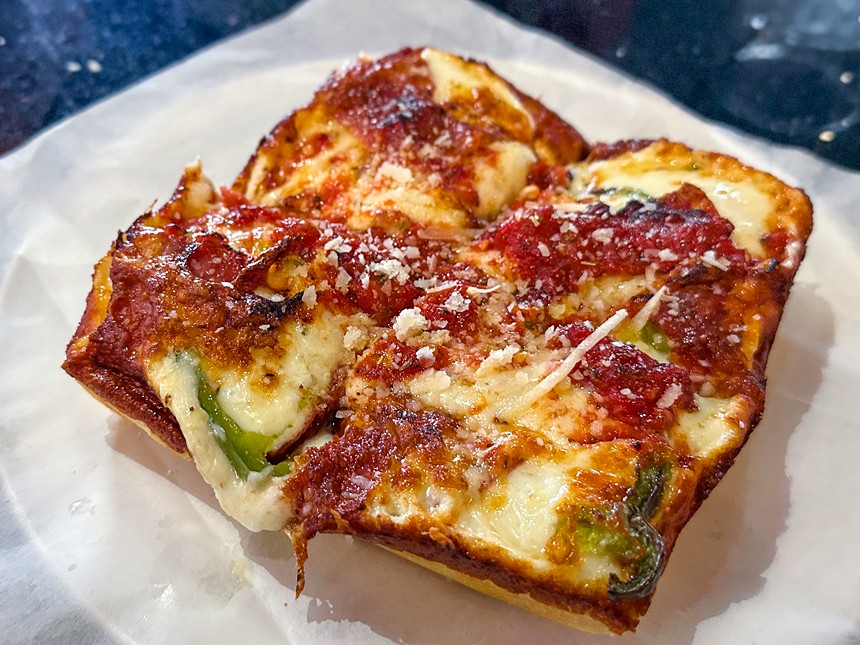 Detroit-style pizza.
Hank Vaughn
The Detroit pizza is a thick, square-cut affair with brick cheese and toppings that go all the way to the edge, baked in a pan so the edges get a bit crunchy. Our Detroit-area friends hate when we make this comparison, but basically ... think a better version of Little Caesar’s. This came out really, well, gooey with cheese of a heartier nature than mozzarella, a robust sauce and just the right amount of chew to the edges. 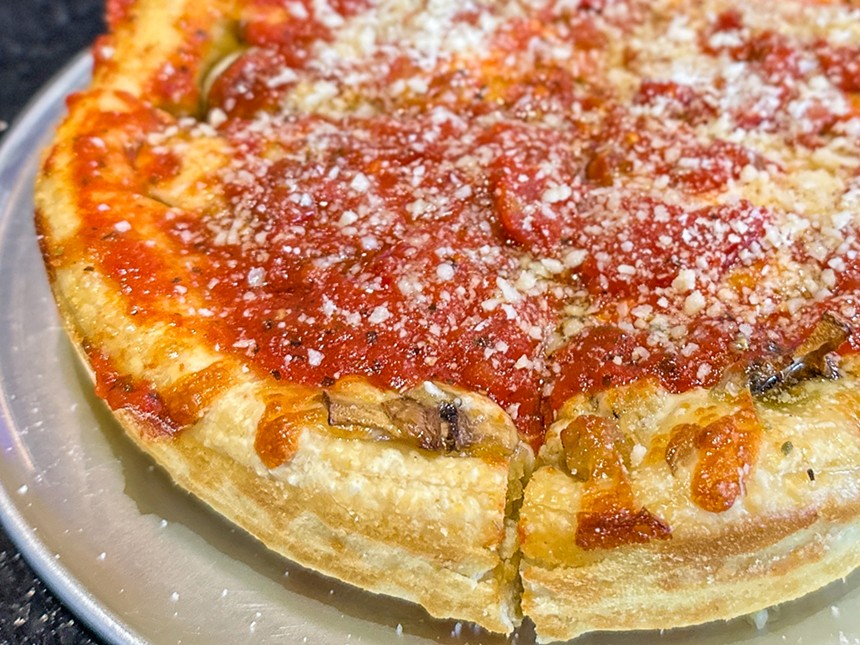 Chicago deep-dish-style pizza.
Hank Vaughn
The Chicago-style pizza was actually a deep dish. Don’t get us started on whether this should truly be called “Chicago-style.” For now, we’ll let labels go and just focus on the results, which were fine: A maybe seven-inch diameter deep dish pizza in the style of Malnati’s or Giordano’s. We went with Italian sausage crumbles and green 20, and it was more than serviceable, if you like that sort of thing, and it arrived at our table in under twenty minutes to boot. Not our favorite style, but it won’t disappoint those who like this sort of casserole.

Brooklyn-style pizza.
Hank Vaughn
The Brooklyn-style pizza flavor was good, but it didn’t deliver on the menu’s boast of “slices that can be folded.” Maybe that's the price one pays for ordering from the lunch menu. Presumably, a 14-inch pie would more accurately put one in mind of New York, but don’t expect foldability from the lunch side. That said, the flavor and execution were above average. 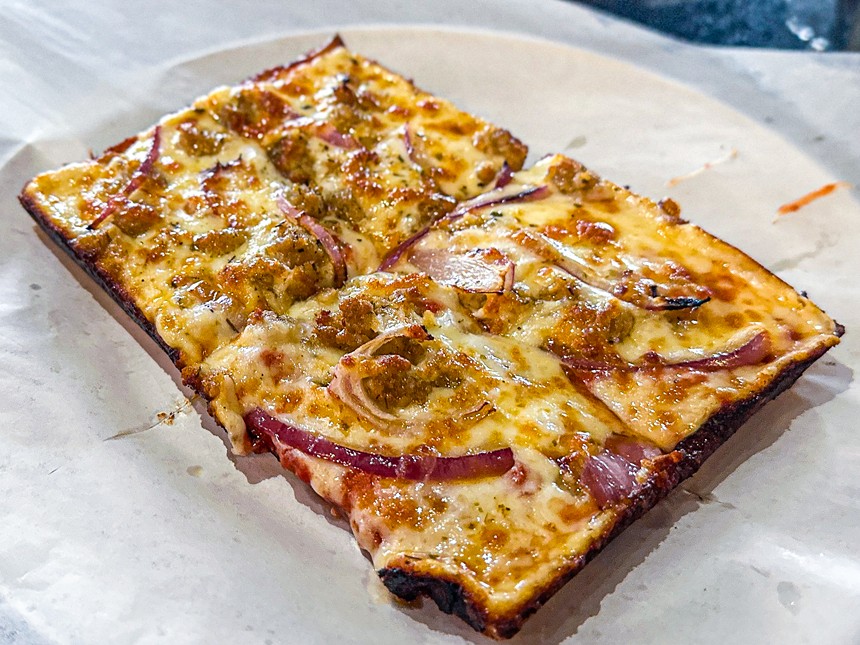 "Tavern"-style pizza, in name only.
Hank Vaughn
Finally, the Tavern. Where to begin? First of all, the menu describes the Tavern style thusly: “From Seattle to Philly and through the Midwest, cities have tried to claim ownership of this crispy thin crust pizza.” Um ...  HELLO? No mention of Chicago? The city of big shoulders, the city that invented, perfected and celebrates this style of pizza gets glossed over, lumped in with “the Midwest.” No. After calming myself down from this outrage, the pizza arrived. Well, it was thin, sure. But not thin-thin, and not crispy. It was cut in squares, at least, but that’s where the similarities ended. It was not tavern-style pizza. If we ignore the bastardization of nomenclature, we can at least say it was good. But we can’t get past the bastardization of nomenclature.

So, other than our quibbles over word definitions, this is a clever concept executed well. It’s great to be able to try several regional pizzas all under one roof, and the full bar along with burgers, steaks and pasta dishes are also a plus, but we’d like to suggest a couple of improvements and/or additions:

1. A pizza flight, where one can get a slice of all five styles on one plate.
2. Actual tavern-style pizza of the type that made Chicago and Old Style beer famous.

1401 Preston Road, Plano. Sunday – Thursday, 11 a.m. – 10 p.m.; Friday – Saturday, 11 a.m. – 11 p.m.
KEEP THE DALLAS OBSERVER FREE... Since we started the Dallas Observer, it has been defined as the free, independent voice of Dallas, and we'd like to keep it that way. With local media under siege, it's more important than ever for us to rally support behind funding our local journalism. You can help by participating in our "I Support" program, allowing us to keep offering readers access to our incisive coverage of local news, food and culture with no paywalls.
Make a one-time donation today for as little as $1.