Tavern Style Pizza: Chicago’s Forgotten Slice And Where to Get it in North Texas 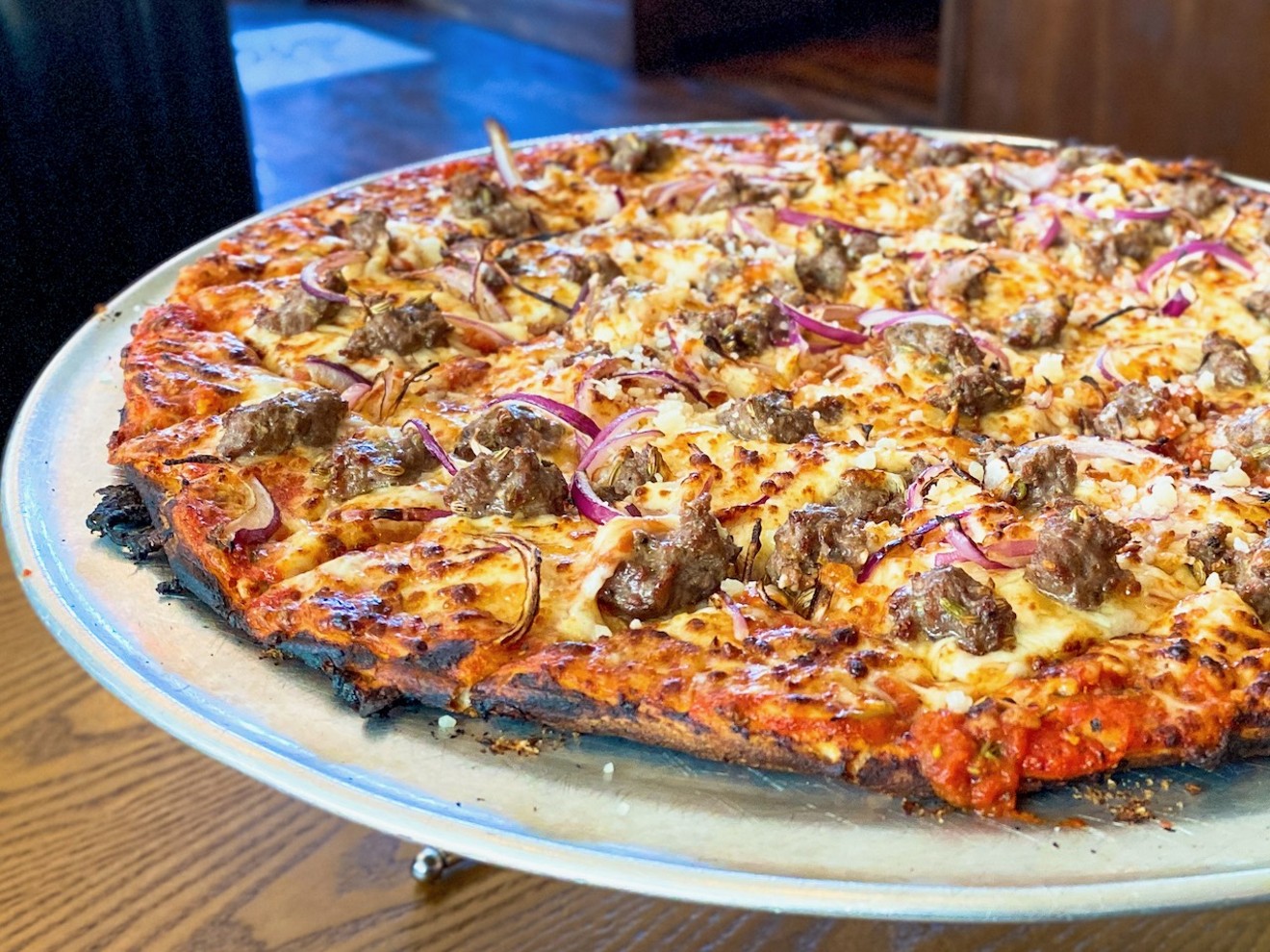 The tavern-style pizza at DL Mack's is legit even if the space is a bit more upscale. Hank Vaughn
If asked what food Chicago is best known for, most people would likely answer deep-dish pizza, which was made famous by Chicago institutions such as Giordano’s, Gino’s East and Malnati’s. These cheesy, gooey wheels have become synonymous with Chicago, for better or worse, and can be found in most metropolitan areas now. This has become "Chicago-style pizza," and it differs greatly from New York-style pizza, giving us a strong two-party system that would seem to appeal to everybody.

But it's not always been that way.

For many Chicagoans, true Chicago-style pizza is not that thick slab that resembles a manhole cover (not just in appearance but also weight), but rather the super-thin pizza cut into squares (as God intended pizza to be served), often referred to as tavern-style pizza. While this style of pizza may have gone the way of the Whig party for tourists, it still remains the quintessential Chicago pizza for many current and former Chicagoans.

Tavern-style pizza became popular in Chicago at the end of Prohibition when local bars started serving pizza that could be easily served on and held with a napkin. Instead of eight slices per pie, a round pizza cut in 2-inch squares can yield two dozen or more pieces. It takes minutes to prepare and bake, unlike deep dish that takes 45 minutes. It travels better than deep dish for deliveries and heats up better the next day. One or two small square slices heated up for “breakfast” the next day, popped into your mouth while waiting at a stoplight during your commute to work? Yum. Try doing that with a three-inch thick wedge of deep dish the next morning.

Deep dish's supplanting of thin crust in the popular psyche of the nation makes it a challenge for Chicago ex-pats living scattered about the country in search of a good tavern-style pizza. How does DFW fare in providing options to sate their Chicago thin-crust pizza cravings? Let’s look at three Dallas-area restaurants that purport to serve this forgotten style of Chicago pizza. DL Mack's
Hank Vaughn
Nestled in the Park Cities neighborhood, this new restaurant calls itself a tavern and serves what it calls “Chicago-style cracker crust” pizza. The tavern moniker is a bit of a misnomer, as this is pretty upscale for a tavern. In fact, when we went to try this place out, we discovered that reservations were pretty much required.

The pizza comes in only one size, 16 inches, and is a bit pricey at $18 for just the basic cheese pizza. We always get an Italian sausage and onion pizza, and this added an additional $5, but this pizza was extremely good. The sausage was in nice chunks as opposed to the less-desirable loose ground variety, the onions were purple and sliced, and the sauce was well-seasoned. The crust was thin, though it could have been a tad thinner. All in all, it was a very satisfying pizza and definitely ticked all the boxes. 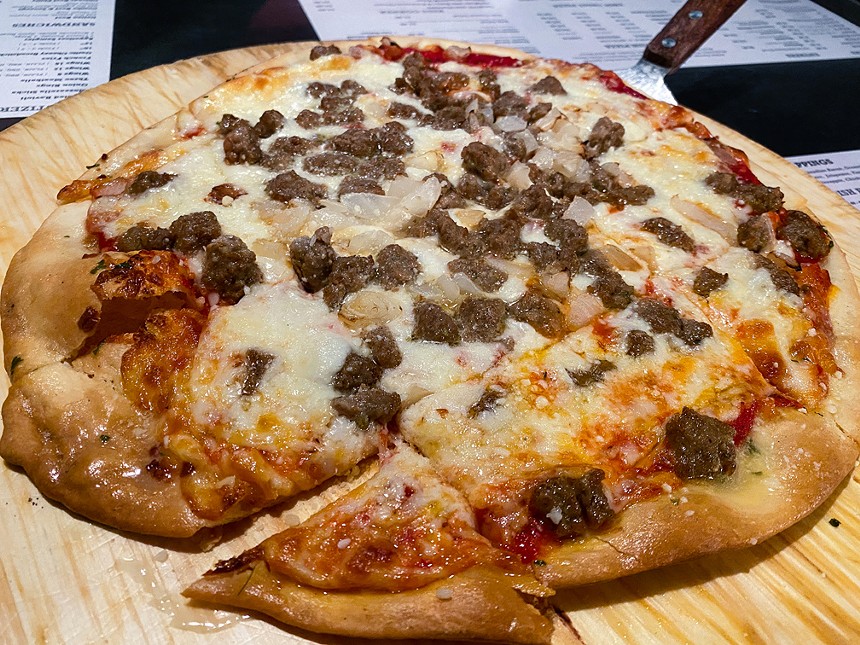 Taste of Chicago pizza
Hank Vaughn
The pizza here was significantly cheaper, and you get what you pay for. It took a long time to arrive at our table and looked unappealing. It’s never a good idea for your eyes to make a verdict before your tongue gets involved. The crust was soggy, the sauce bland, the onions were not red and were diced, but at least the sausage was in chunks. My wife summed it up pretty well when she referred to this as “roller rink pizza.” To be clear, one doesn’t want to eat roller rink pizza unless you’re 8 and at a birthday party and have no choice but to try to get that down between the limbo contest and the third playing of “YMCA.” Needless to say, we're not eight years old. 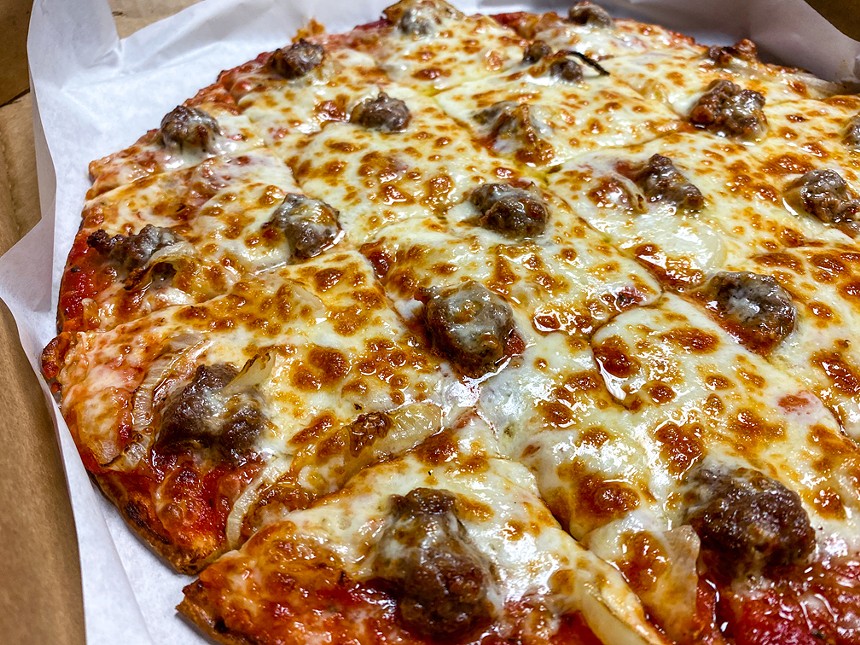 Chicago's Original pizza in Allen is a drive, but still a lot closer than Chicagoland.
Hank Vaughn
This was a bit of a drive, in rush-hour traffic, no less, but it was worth it. Any place that has the gumption to name its establishment “Chicago’s Original Pizza” better live up to that lofty claim, and this place does. The owner is Tom Lease, a transplant from the ‘burbs of Chicago. This is really a takeout-only place, as the only seating is a single picnic table outside, so there was ample time to chat with Lease as we waited for our order. Evidently, he gets a decent amount of Chicago ex-pats trying to relive their Chicago grub days (the menu also includes such Chicago stalwarts as Italian beef sandwiches, Polish sausages and hot dogs).

In summary, Chicago’s Original was the best, followed closely by DL Mack’s.

While A Taste of Chicago probably offers a fine deep dish, one should look elsewhere when jonesing for thin crust. DL Mack’s is more expensive but closer. Chicago’s Original is more affordable, but a bit of a drive. You can’t go wrong with either one, however, and they should definitely be tried by any ex-pat Chicagoan who longs for those square pieces of goodness of their youth.

If you want a tomato and cheese casserole, by all means, continue ordering Chicago deep dish. If, however, you’d like to be transplanted back to the corner taverns of Chicago, where Old Style flows freely and tourists are non-existent, give these local spots a try.
KEEP THE DALLAS OBSERVER FREE... Since we started the Dallas Observer, it has been defined as the free, independent voice of Dallas, and we'd like to keep it that way. With local media under siege, it's more important than ever for us to rally support behind funding our local journalism. You can help by participating in our "I Support" program, allowing us to keep offering readers access to our incisive coverage of local news, food and culture with no paywalls.
Make a one-time donation today for as little as $1.