Poco Fiasco Is, in Fact, a Little Fiasco. But It's Tasty. 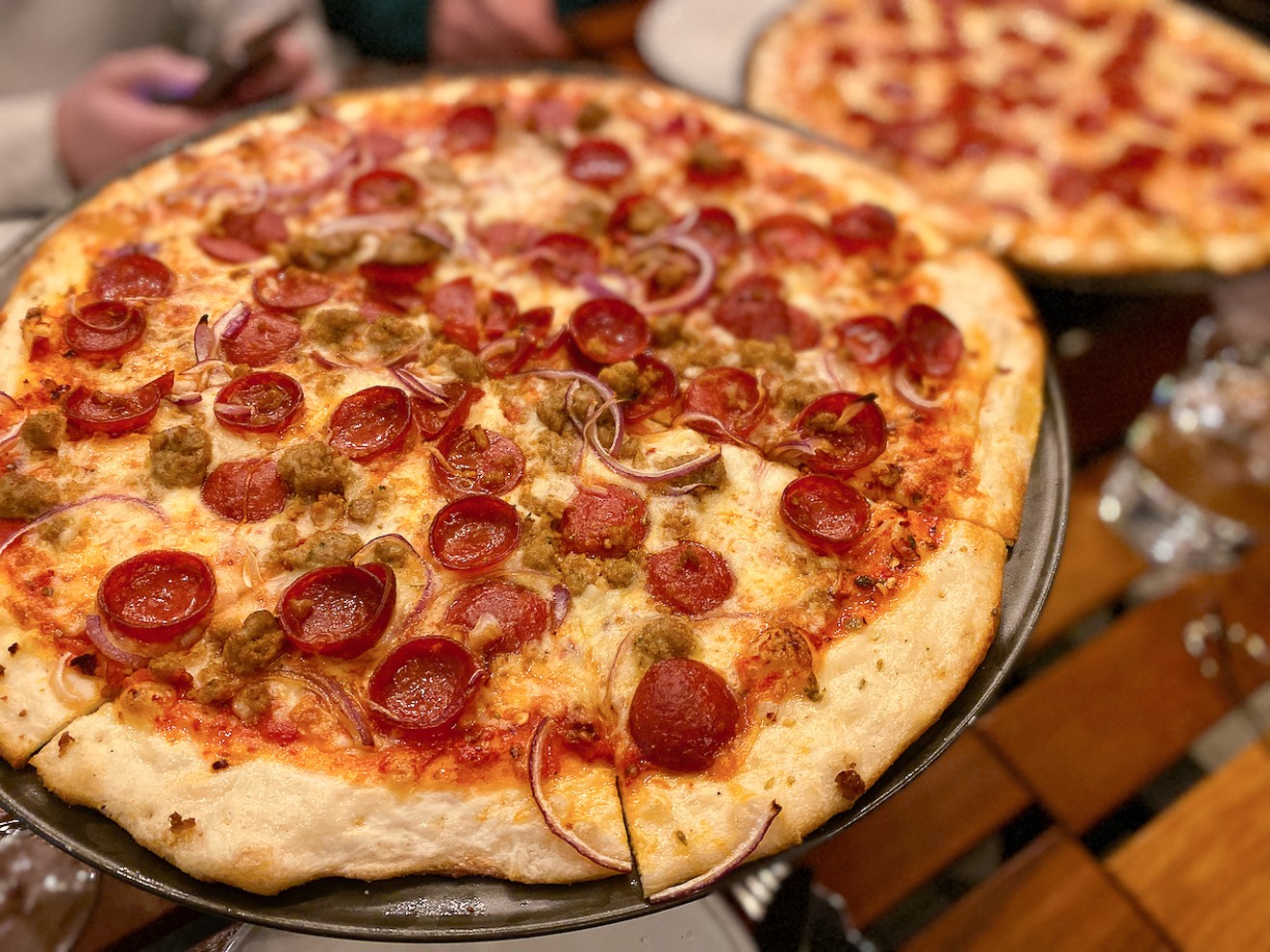 The Donkey is made with a not-very-hot diablo sauce, pepperoni and spicy Italian sausage. Lauren Drewes Daniels
We walked up to Poco Fiasco 15 minutes late for our reservation on a cold evening. This new pizza and martini restaurant is the 11th concept from Harwood Hospitality, which has also brought us Elephant East and the pub Harwood Arms, both within a stone's throw. Poco Fiasco is part of Harwood Hospitality's growing restaurant portfolio.
Lauren Drewes Daniels
Poco Fiasco is long and narrow with a bar on one side, not too big. There were no open tables inside when we arrived (late), so we asked how long the wait was. The host responded with a quizzical look:  Why wait when you can sit outside on the large patio?

When we expressed concern about the chilly temperatures, the host reassured us that the patio is heated. Sure enough, about a half dozen tall heaters stood at attention al fresco.

We sat down and realized that the open-air patio was actually pretty cold; nothing blocked a light crosswind. There were ample heaters, but the one nearby wasn't on. Only two were lit, creating rather small circles of warmth. Another group huddling around their table was ready to throw in the towel and asked to be added to a waitlist for a table inside.

Same quizzical look: But why? There are heaters.

The patio at Poco Fiasco is around the same size as the interior space.
Lauren Drewes Daniels
For the next hour, a rotating staff of six or so discussed at length and fiddled with the heaters trying to get them all on. Granted, it might have been the first night that full-blast heat was needed. About 45 minutes later, the patio was indeed warm. 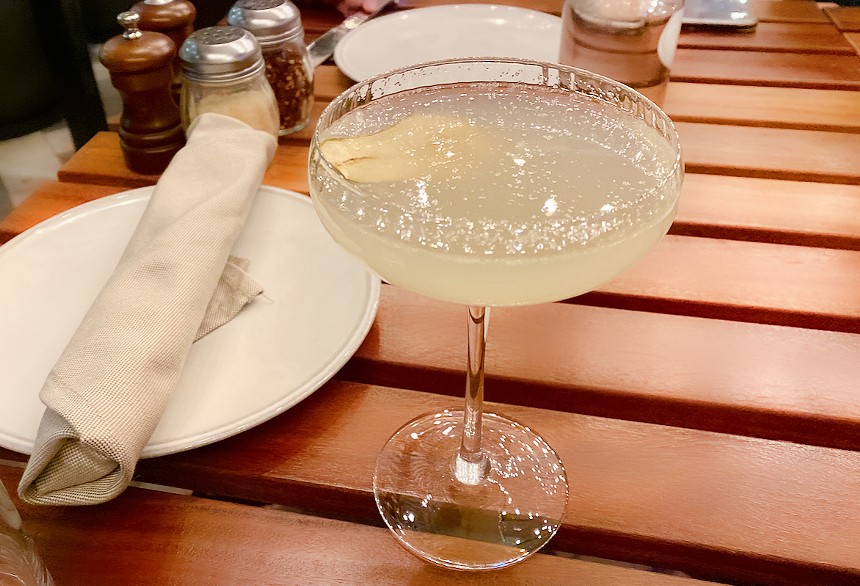 The Bart martini is a touch sweet, with a bit of pear and lemon.
Lauren Drewes Daniels
Prior to that, we'd adjusted to the chill and ordered drinks, which, unfortunately, sat in the pass for 15 minutes while the staff worked on heaters. The espresso martini made with cold brew was recommended as a house specialty (it comes with a tiny French press), but coffee before pizza didn't seem right. I started with a light and nicely balanced Bart martini ($14), which is made with Absolut pear and a touch of lemon juice.

A mix of pop tunes played on speakers outside, but they clashed with the music coming from the small patio area at Elephant East. Most people likely wouldn't notice, but once I had heard a couple songs, it was all I could hear.

Warm garlic knots with whipped ricotta.
Lauren Drewes Daniels
We ordered garlic knots with whipped ricotta from the appetizer menu. These were warm in a pool of olive oil, but the ricotta was a touch too sweet, clashing with the strong garlic. Each by itself was good, but the ricotta seemed better suited for breakfast or dessert.

Pizzas come in three sizes: 12-, 16- or 18-inch, and there are about a dozen styles to choose from, plus a build-your-own option; prices range from $16 to $26. There’s a traditional pepperoni and quattro formaggi, plus some outliers like The Texan with brisket, a Buffalo chicken and a bacon and egg pizza.

A food runner brought our two pizzas out and went straight to a group of workers still talking about heaters or something. None of them could figure out what to do with the pizzas. It seemed like it was the first time they’d taken pizzas to a table. Maybe it was. They talked a lot. Our waiter hadn't been around for a while. Eventually, someone took charge, grabbed the pizzas and just guessed. Incorrectly. The food was taken to a party who had just arrived, but it was close enough for us to snag it.

We went with The Donkey, a pizza topped with diablo sauce, pepperoni, spicy Italian sausage, red onion and fennel pollen. It was loaded with meat and had a touch of heat, nothing crazy or devilish. Perfect for a chilly evening. The crust here has good chew, and is certainly foldable but doesn't sag. There's also a nice crispiness to it; your basic three-star athlete of pizza dough. 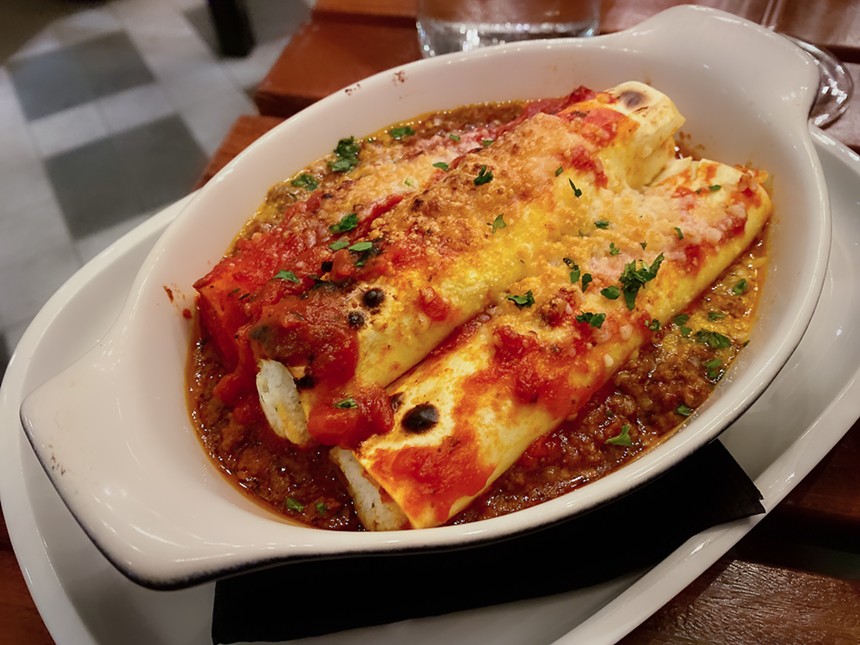 The manicotti is made with a hearty Bolognese.
Lauren Drewes Daniels
There are just four mains in addition to the pizzas. We went with the baked manicotti, served with a house-made Bolognese sauce ($24). It was our favorite dish of the evening, a perfect combination of comfort food, cheese, more cheese and that hearty meat sauce.

When it was time to pay and leave, just use your imagination. I eventually grabbed the guy who had taken charge of the pizzas and handed him my card. I just guessed and was close enough. It all worked out, as he sensed our slight frustration and responded with urgency.

Wondering "is this just me, or an isolated experience," I made a search of recent reviews and confirmed that ours was not an isolated experience. Although not an overwhelming problem — most reviewers like the spot — some mentioned messy service. Including the dreaded problem of drinks sitting in the pass, along with loud competing music.

Despite all these little fiascos, everyone was very nice. Our server was downright charming when he was around. I’d go back and gladly sit in his section. Or perhaps the bar would be prime. Maybe it's all a ploy to simply play into the name of the place: a little fiasco. Not much. Just a touch.

Turns out that if you’re popping in for dinner before a Stars or Mavs game, you can keep your car at the valet until 11 p.m. It’s free, but tip, obviously. It's an easy walk to the American Airlines Center. You also avoid the game traffic. On Fridays and Saturdays, the spot is open until midnight, and there's a side-hustle window for pizzas by the slice for a bit of post-game recovery.

The Harwood District continues to flourish and grow with a good variety of restaurants and bars. This pizza spot is a nice option to add to the fold, and a little fiasco never hurt anyone.

One party tip: Had I not previously known where the valet was because of trips to Harwood Arms and Elephant East, I would have circled the block a couple of times trying to find it. As you're driving along McKinnon, pull in just before the restaurant. OK, yeah, you might have to circle once. But then it's easy.

Poco Fiasco, 2823 McKinnon St. Sunday – Thursday, 11:30 a.m. – 10 p.m.; Friday and Saturday, 11:30 a.m. – midnight.
KEEP THE DALLAS OBSERVER FREE... Since we started the Dallas Observer, it has been defined as the free, independent voice of Dallas, and we'd like to keep it that way. With local media under siege, it's more important than ever for us to rally support behind funding our local journalism. You can help by participating in our "I Support" program, allowing us to keep offering readers access to our incisive coverage of local news, food and culture with no paywalls.
Make a one-time donation today for as little as $1.