The salmon salad tower with bagels at Sadelle's. Major Food Group
What do you get when you mix cowboy boots with Timberlands (affectionately referred to as “Timbs” in the 212)? Well, it depends who you ask, but politics aside, the New Yorkization of Texas has been undeniable in the past few years. Perhaps this is most evident in Dallas with the influx of New York-centric dining concepts. A notable addition in spring 2022 was Sadelle’s in Highland Park.

Part old-school delicatessen, part fine-dining institution, Sadelle’s brings to Dallas the best of both worlds. Fresh bagels? Check. Cup of joe? Check. Turkey on rye with cole slaw? Check. As far as the New York corner deli essentials are concerned, Sadelle’s is spot on. There is much more to this establishment than the staples, however. Sadelle’s also offers an elevated deli experience within a refined atmosphere. In accordance with the corner deli theme, Sadelle’s appropriately occupies a side lot in glamorous Highland Park Village, adjacent to Preston Road. Directly out front are several 15-minute parking spots, which is convenient for grab-and-go customers stocking up on bagels, smoked salmon and sides from the full-service deli case. Customers may also opt for café-style dining along the street, where patrons feverishly work on laptops as they sip Sadelle’s notoriously strong coffee and fresh bakery items.

Sadelle’s daytime offerings include classic sandwiches of roast beef, turkey, ham or bacon, and traditional deli sides including fresh cole slaw and “New York” pickles. Perhaps most impressive among the daytime assortment is the smoked fish, a critical element of the New York deli experience. Here the salmon, sable and sturgeon are hand-sliced the old-fashioned way, paper thin, across the lines, using a long, straight blade. For deli connoisseurs, this is a beautiful sight. 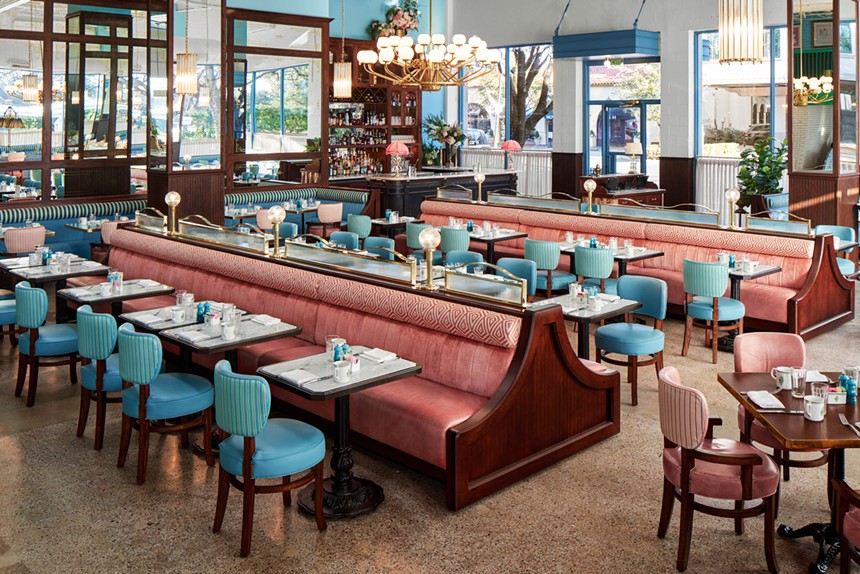 Nathan Schroeder
For dinner, Sadelle’s transforms from a deli into a full-service restaurant. The interior itself has booth seating, not unlike what you would expect to see on an episode of Seinfeld, but much more sophisticated than the red patent leather of a shiny diner. This is true of most of the accents, which are vaguely retro/Art Deco, but also fancy (for lack of a better term). Still true to the deli theme, the staff wears long white butcher coats adorned with the Sadelle’s insignia.

The dinner menu itself is very approachable — not quite comfort food, but not quite Michelin star either. While there are several caviar options, you may also opt for chicken schnitzel with a side of spicy mustard and cole slaw. This dish itself is the perfect blend of sweet and salty, a classic pairing that is synonymous with the New York deli experience. While smoked fish is a specialty, the roasted salmon is also very well done for the diner who may be counting calories as part of a New Year’s resolution. It’s tender and flaky, with a kick from the fresh horseradish.

While salads rarely make or break a restaurant, it is often a solid indicator of freshness and ingredient selection. As a starter, the Greek salad is a hearty blend of vegetables with feta cheese and a zesty herb vinaigrette. The portion is large, and the vegetables are notably crispy and flavorful. One can certainly appreciate the quality and portion size, which is not limited to the salads.

Interestingly, Sadelle’s is part of the Major Food Group, a hospitality group whose portfolio includes Carbone, another recent addition to Dallas. Like other groups that have focused on the Dallas market, Sadelle’s has an established presence in Las Vegas, New York and Miami. In addition, it has expanded internationally in Europe (Paris) and the Middle East (Riyadh). Once again, Dallas is in great company and continues to be recognized by internationally acclaimed restaurant concepts.

Whether it's morning, afternoon or night, be sure to check out Sadelle’s. For the full experience, come for the bagels, stay for the smoked fish and top it off with a glass of prosecco and caviar.

Sadelle's, 1 Highland Park Village. Monday – Sunday, 9 a.m. – 9 p.m.
KEEP THE DALLAS OBSERVER FREE... Since we started the Dallas Observer, it has been defined as the free, independent voice of Dallas, and we'd like to keep it that way. With local media under siege, it's more important than ever for us to rally support behind funding our local journalism. You can help by participating in our "I Support" program, allowing us to keep offering readers access to our incisive coverage of local news, food and culture with no paywalls.
Make a one-time donation today for as little as $1.