Chicken wings are served with slices of radishes. Amy Meyer
Chicken is having a moment, and it doesn’t seem to be dying down (or should I say frying out?) anytime soon. First, there was the chicken sandwich wars with the debut of Popeye’s chicken sandwich. More recently, hot chicken has been sweeping the nation outside of Nashville, and that trend continues in Dallas with a Hattie B’s slated to open in Deep Ellum in 2022, and multiple Dave’s Hot Chicken locations popping up around town. There’s plenty of fried chicken options in Dallas, but Korean fried chicken isn’t as abundant. Welcome to the scene, Mad For Chicken. 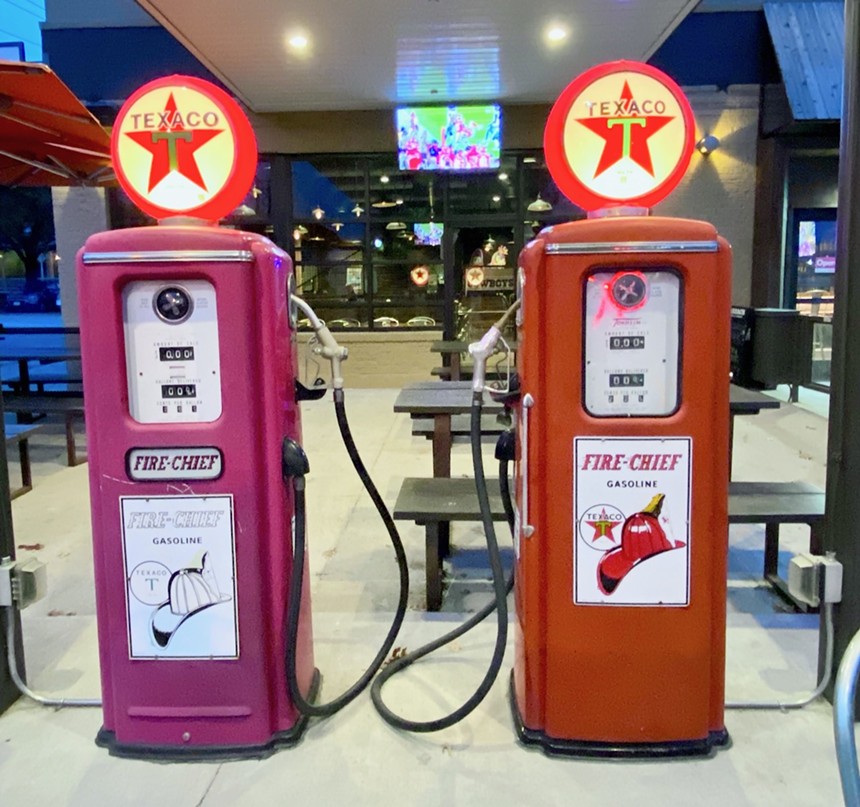 Mad for Chicken is at the old Butcher Board space in downtown McKinney.
Amy Meyer
The New York-based restaurant launched in 2005 with 10 locations in its home state. The McKinney location opened its doors over the summer, making it the first outpost outside of New York. The brand has since expanded in Texas with locations in Frisco, Carrollton and Flower Mound.

Mad For Chicken took over the Butcher Board space next to Sugarbacon Proper Kitchen in downtown McKinney. Going in on a Sunday, the place gave off major elevated sports bar vibes, with accented wood walls, Cowboys banners and six mounted TVs playing the football game with the sound on. There’s also a huge, stylized chicken painted on one of the walls.

Once you are seated, the server gives you an idea of what to expect of your dining experience. The menu includes Asian-inspired dishes with the star of the menu being the Korean fried chicken. You can order wings, drumsticks, boneless breasts or a combination of styles. Maybe order an app if you’re hungry, because the double-fried chicken will take 20-30 minutes to cook. The chicken is coated in a thin layer of flour, fried at a low temperature, excess breading is removed, and the chicken fried again at a high temperature then hand brushed with the signature house soy or spicy garlic sauce.

Other than the chicken, the menu offers various dressed up french fries, macaroni and cheese and fried dumplings as appetizers. Kimchi can be found in many dishes, including the fried rice and quesadilla. Bulgogi beef is piled high on a cheese sandwich or served atop rice or mac and cheese. Kimchi fries
Amy Meyer
The kimchi fries came out with a good crunch, topped with spicy mayo, green onions and, of course, kimchi. The kimchi was on the mild side, more sweet than spicy, and chopped into small pieces. To wash it down, they offer six cocktails and beers on draft, including some local options from Texas Ale Project and Manhattan Project Beer Co. A variety of dipping sauces are offered, but the fries have an abundant helping of toppings.

The chicken comes out fresh from the fryer with a good crunch and juicy inside.It's coated in a very light sweep of sauce, so this is where those extra dipping sauces, like jalapeño barbecue, could come in handy. The soy flavor is prevalent with a very subtle taste of garlic, while the spicy garlic is mild in heat with a hint of garlic notes. As an accompaniment, a small side of radishes is served with the chicken.

Overall, Mad For Chicken makes for a good space to meet up with friends and watch the game or grab some piping hot chicken before a night out on the McKinney square. Locations have been popping up all over North Texas since the McKinney debut, so be on the lookout for a Mad For Chicken near you.
KEEP THE DALLAS OBSERVER FREE... Since we started the Dallas Observer, it has been defined as the free, independent voice of Dallas, and we'd like to keep it that way. With local media under siege, it's more important than ever for us to rally support behind funding our local journalism. You can help by participating in our "I Support" program, allowing us to keep offering readers access to our incisive coverage of local news, food and culture with no paywalls.
Make a one-time donation today for as little as $1.