Ngon Vietnamese Kitchen in Lower Greenville Kathy Tran
Poking through the steaming wreckage of 2020, it’s hard to find much good. But that’s what we’re going to attempt here: a list of good developments on the Dallas food scene that came from this horrible year.

Yes, given all the awfulness we have endured, it is easier to list bad and alarming trends. America’s politicians showed a total failure of imagination in their response to the pandemic, providing small businesses with help only in the form of a complicated, confusing loan program. They also, as of this writing, have sent American workers a single direct payment, with a second, even smaller payment on the way.

The trends in the two major parties are different, but equally disturbing. Democrats want to help — they proposed $2,000 monthly direct checks and trillions of dollars in aid — but they don’t care enough to press home the point. They insist, for example, on bringing up all sorts of issues in January’s Georgia Senate runoff, when they could simply promise $2,000 checks in every single ad, tweet and sound bite.

Republicans, meanwhile, do not want to help at all. They object that it costs too much money. They bargained down the next round of direct payments to a tiny $600, after Wisconsin Sen. Ron Johnson complained that being more generous meant “mortgaging our children’s future.” Locally, the Texas government refuses to dip into the state’s rainy day fund to help bail out struggling businesses and residents. Early in 2020, the president rejected a relief plan because he feared too many recipients might be Democrats.

There are other dispiriting restaurant trends this year, too. Basic etiquette has become politicized, as followers of one party openly mock or attack people who just want to avoid spreading disease. In Tyler, a group of anti-safety unmasked protesters tried entering the restaurant Culture ETX, owned by former Dallasite and military veteran Lance McWhorter, who dryly noted afterward that most of them had “never stepped foot in my restaurant” before.

Many experts are also concerned that after the government’s refusal to help wipes out thousands of independent bars and restaurants, the remaining businesses will mostly be big corporate chains.

Oh, shoot, this was supposed to be about good trends, wasn’t it? Amid all the gloom, here are a few silver linings that gave me cheer and hope. I hope we’ll see all of these trends continue after the pandemic ends.

Remember when food to go was pretty much just pizza, sandwiches and party platters? Now we’ve been enjoying carry-out from all sorts of restaurants across the whole edible spectrum. All those plastic containers add a cost to the businesses’ bottom lines, but I’ll be happy to keep paying a few dollars more if I can have a three-course feast, a sheet pan of chef-made lasagna or jaw-dropping roasted chicken on my own couch.

Cities across America have moved to curtail the naked greed of delivery and ordering apps like Uber Eats and Grubhub, which often charge exorbitant fees, create deliberately fake phone numbers to funnel customers away from restaurants or even pretend to offer restaurants that haven’t joined the services.

Dallas has been slower than other cities to respond to the threat, but anti-app sentiment is growing in the consumer class, too. I’m seeing more customers ask restaurant owners on social media, including local Facebook groups, which app to use, or whether to delete them all. Let’s keep spreading the word that it’s better for everyone, diners and businesses, if we order from a business directly, without a greedy middleman.

“Parklets” and Momentum Against Parking Requirements

Dallas’ parking rules for restaurants have long been harsh examples of regulation gone wrong. (We’ll have plenty of examples to discuss in early 2021.) But, at last, there appears to be an appetite among local politicians for some relaxation of the rules.

The pandemic induced the city to allow some restaurants to set up patios on top of converted parking spaces. These “parklets” made something useful, even enjoyable, out of empty asphalt in the Bishop Arts and Deep Ellum neighborhoods.

But there’s still much progress to be made. Some restaurants had their patios shut down or moved, and Dallas’ cautious leadership stands in the way of the dramatic quality-of-life improvements that have been made in other cities during the virus.

Lower Barrier to Entry for Smaller Businesses and Pop-Ups

This past year has seen dozens of tiny pop-up groups blossoming across the landscape, unexpectedly continuing a trend Dallas had seen in the years before the pandemic. Although new food businesses couldn’t rely on events and brewery taprooms to get started, they could deliver kits or special menus, sell frozen dumplings or create lavish charcuterie boards. All of a sudden, being an in-the-know foodie didn’t mean going to new restaurants — it meant having a special number you text for bagels. 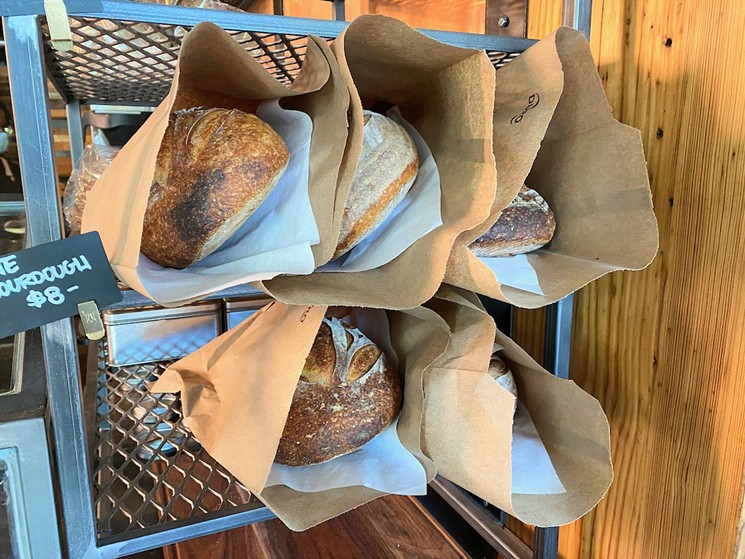 Now, though, not only is sourdough a pandemic statement of sorts, but each neighborhood seems to have its own bread pop-up of some kind. Restaurants such as Lucia are serving bread to go by itself, too. Even if you’re not feeding your own starter and forming your own loaves, a good slice of bread is easier to find than ever.

For whatever reason, the longer this pandemic goes, the more I just want a damn-good sandwich. Luckily, lots of high-end restaurants turned to sandwiches this year, such as Macellaio’s enormous picnic loaves and Parigi’s curbside cheeseburgers. (Update: Between the writing and publication of this story, Macellaio announced its permanent closure; sandwiches could not save the business. We’ll have more details soon.)The more the merrier. Also, multiple new bánh mì spots opened across town, making it even easier to find one of the world’s great sandwich styles in Oak Cliff, on Greenville Avenue or near the Medical District Center.

At Taco y Vino, the whole backyard is a patio now. At Las Almas Rotas, sidewalk tables span the entire block. Other restaurants, like Homewood and Petra and the Beast, have invested in semi-permanent, semi-enclosed spaces so folks can sit outdoors in less-than-ideal weather.

Not every patio is ideal. Some are still too crowded, and some of the enclosures reduce airflow, making the pandemic a greater concern. But after The Year of the Picnic, it will be nice if we get to keep many of the new outdoor spaces businesses have created and enjoy a slightly more al-fresco restaurant culture.

I know I said politicians were making everything worse, but at least we all noticed.

This time last year, many of the chefs, line cooks and food lovers in my social media circles professed the belief that engaging in politics was pointless because nothing would ever happen and both parties are the same.

Well, now we know better. The two parties may both be frustrating, but they’re definitely not the same. And this year has created a sense of urgency among service-industry professionals about making a fairer economy, achieving just healthcare and lobbying for local and national change that would make small businesses a little less impossible to run.

Let’s keep the momentum going. Goodness knows the path ahead is going to be just as steep.
KEEP THE DALLAS OBSERVER FREE... Since we started the Dallas Observer, it has been defined as the free, independent voice of Dallas, and we'd like to keep it that way. With local media under siege, it's more important than ever for us to rally support behind funding our local journalism. You can help by participating in our "I Support" program, allowing us to keep offering readers access to our incisive coverage of local news, food and culture with no paywalls.
Make a one-time donation today for as little as $1.