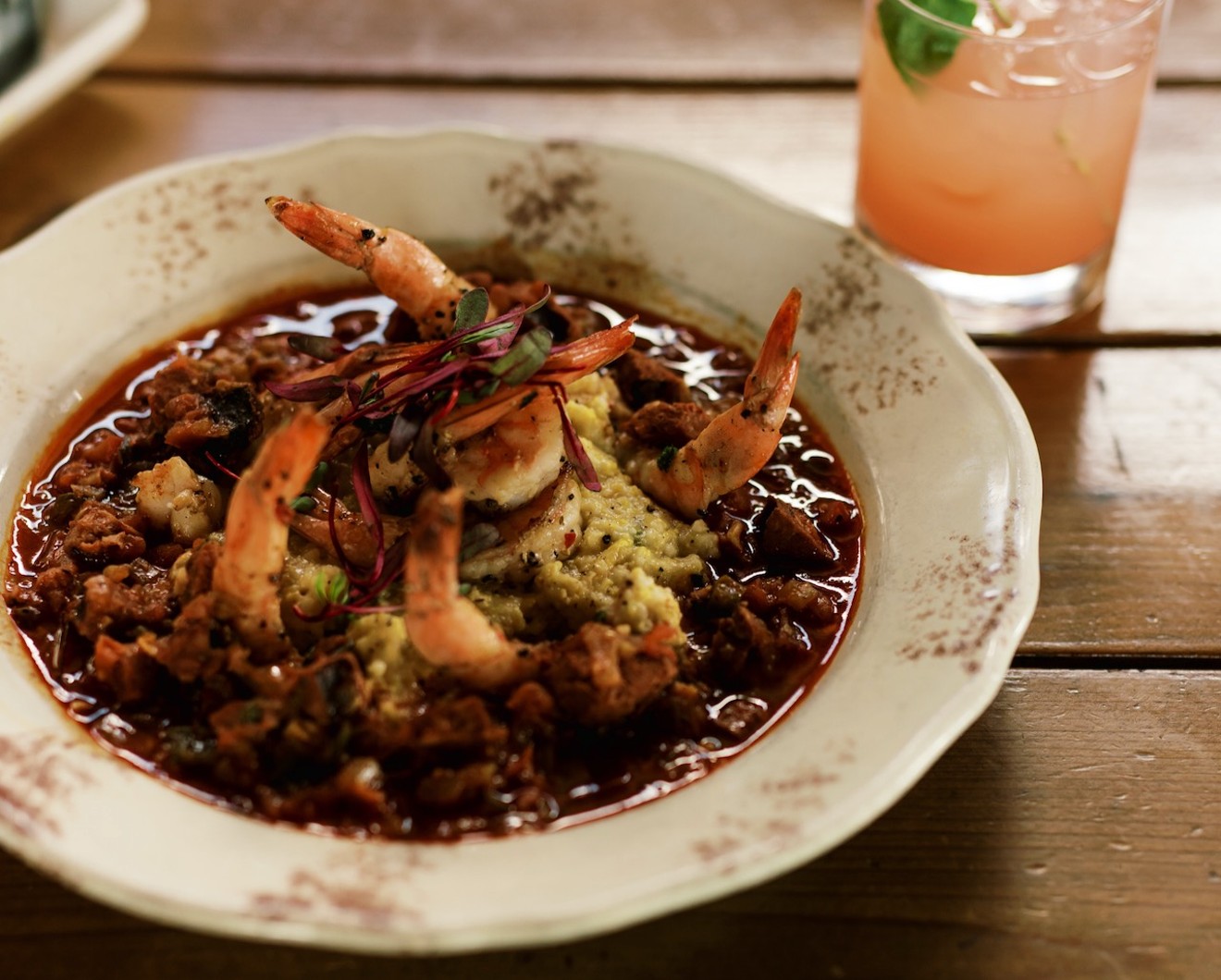 The shrimp and grits at Haywire is served with a tasso and andouille sausage red-eye gravy. Haywire
A Legacy West favorite has made its way to Uptown. Earlier this month, Haywire opened its second location, this one on McKinney Avenue in Dallas. Haywire’s flagship restaurant has served as a tentpole for the Plano shopping center since it first opened in 2017, but the Texas-themed, whiskey-forward steakhouse fits right into its second location in Uptown.

The original Haywire is known for having three levels, each offering different vibes. The first floor is a comfortable, cabin-esque whiskey lounge, the second the main dining area and bar and the third a rooftop dining area with an Airstream trailer ideal for kicking back with cocktails or a cute, Texas-style Instagram photo-op. Although the new location is only one level, the space is divided into three sections, each corresponding with the original’s three levels.

Haywire’s cocktail program at the new Uptown location is as robust as the original. Signature cocktails include The Judd, named after owner Judd Fruia and made with Haywire’s own hand-selected barrel of Balcones single malt whiskey, simple syrup, peach bitters and spiced pecans ($22). Lighter choices include Texas Twisted Lemonade, made with Western Son lemon vodka, elderflower liquor, lemon, simple syrup, ginger ale and a Luxardo cherry ($12).

If you’re going with a group of people, the best plate to start off with would be the chef’s favorite four, containing two elk tacos, four large onion rings, fried green tomatoes and queso blanco ($22.95). Lighter options for oneself include the mesquite-grilled Caesar, a half heart of romaine lettuce, grilled to delightful crispiness, flavored with smoked chile butter, hand-torn garlic croutons, grape tomatoes, Parmesan and an ancho Caesar vinaigrette ($6.95)

The shrimp and grits are a favorite at the Plano location, and this is no different for the new spot. The beautifully arranged shrimp sit atop a bed of green chile white cheddar grits with a gravy made with tasso ham and andouille sausage ($18.95).

While several restaurants in Plano’s Legacy West area have come and gone, especially amid the pandemic, Haywire has stood strong for nearly four years. Their second spot doesn’t aim to outdo any of the surrounding steakhouses, but rather to be a spot where lovers of Texas and the south can bond among bold cocktails and extravagant southern comfort food.

Haywire, 1920 McKinney Ave. #100 (Uptown). Open 11 a.m. to 10 p.m. Monday through Thursday; 11 a.m to 11 p.m. Friday; 4 to 11 p.m. Saturday; 4 to 9 p.m. Sunday.
KEEP THE DALLAS OBSERVER FREE... Since we started the Dallas Observer, it has been defined as the free, independent voice of Dallas, and we'd like to keep it that way. With local media under siege, it's more important than ever for us to rally support behind funding our local journalism. You can help by participating in our "I Support" program, allowing us to keep offering readers access to our incisive coverage of local news, food and culture with no paywalls.
Make a one-time donation today for as little as $1.