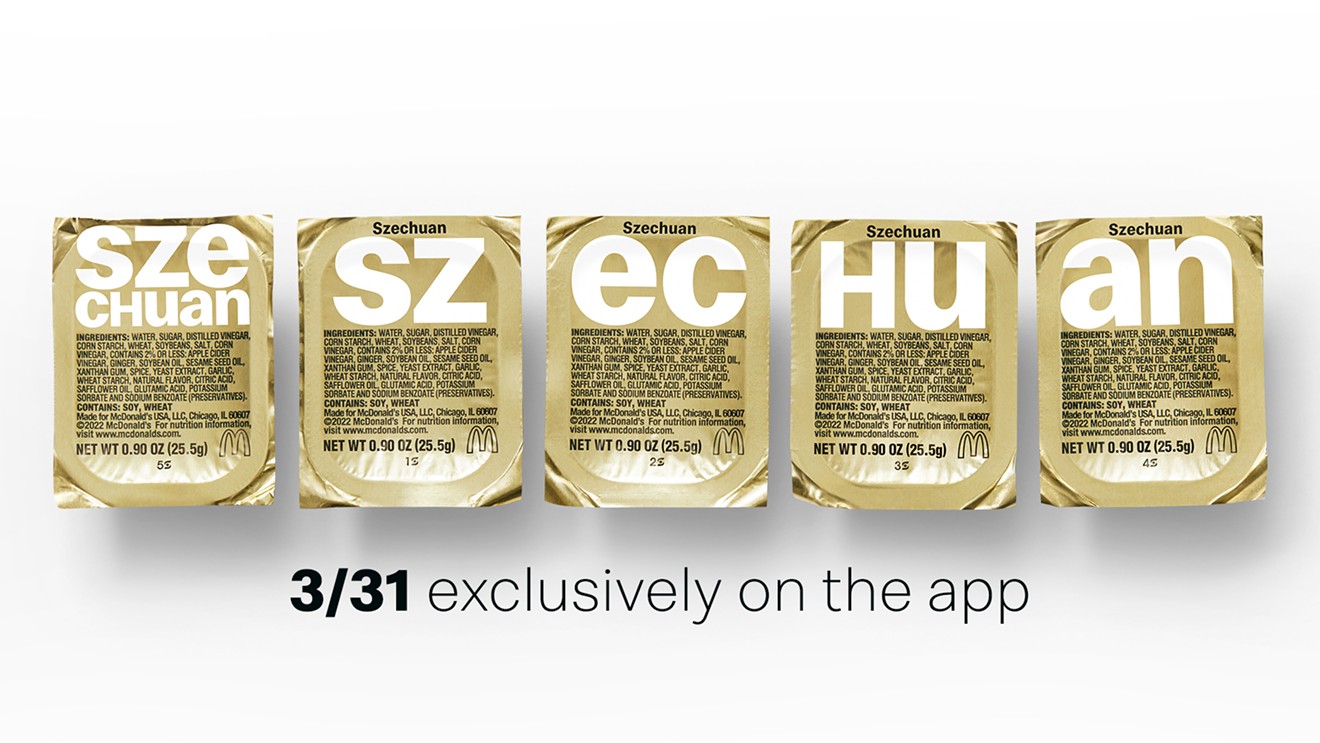 The elusive and rare Szechuan sauce is being re-released on Friday through the McDonalds mobile app. Courtesy of McDonalds
One of the rarest sauces known to mankind is making another comeback, and it didn't take nine more seasons of Rick and Morty to get it.

The famous McDonald's Szechuan Sauce will be available at participating locations on Thursday, March 31, through the restaurant's mobile app, according to an announcement on the company's Twitter page.

This rare mixture of soy, distilled vinegar, corn starch, wheat, sugar, potassium sorbate and sodium benzoate has the kind of cult-like following that most sauces can only dream about as they cry themselves to sleep. Worcestershire sauce once had to admit itself into an outpatient mental health treatment program because it could not stop comparing itself to McDonald's Szechuan Sauce and devaluing itself in the process.

The Asian-fusion fast food coating first came with a side of McNuggets in 1998 as part of a promotional marketing campaign with Walt Disney Pictures to promote its animated epic Mulan. McDonald's sold customers a 20-piece McNugget entrée in a special Chinese restaurant takeout box to go with the sauce because back in the late 1990s "cultural appropriation" was only the name of a high school ska band that didn't have the drive to make it.
The sauce lasted about as long as it took for dollar movie theaters to stop showing Mulan, and it never found its way back to McDonald's in-store or drive-thru menus. However, five years ago, it made an interesting return to the public's consciousness in a way that makes you ashamed to be a member of the human species.

The Adult Swim animated adventure series Rick & Morty, a take on the time- and dimension-jumping sci-fi series Doctor Who if The Doctor was a raging alcoholic with unaddressed guilt issues, used the long, lost dipping sauce as a major plot point in the opening episode of its third season.

A big chunk of the episode titled "The Rickshank Redemption" happens inside a simulation of Rick's memories as he longs for a different world in a Shoney's restaurant, another long, lost, mass-marketed restaurant product that was a big part of my childhood with its "Slim Jim" mini-ham and Swiss hoagie. During Rick's virtual jaunt through his recollections of 1998, he uses this rare, neural opportunity to visit a McDonald's to get an order of McNuggets and "as much of [the Szechuan Sauce] as you're allowed to give me," Rick says at the drive-thru.

Oh yeah, the episode also reveals how Rick's wife and daughter died in a horrible explosion in his very first dimension before he started screwing with the fabric of existence and his grandson Morty's psyche.
Rick wasn't the only person with a hankering for the sauce. Rick & Morty creator and voice actor Justin Roiland also had a love for the stuff, and McDonald's sent him a 64-ounce jug of the sauce that he brag posted on Twitter. And can you blame him? He found a way to get his own bottle of the Szechuan Sauce and he didn't have to organize an Ocean's 11 style heist to break into Hamburger University's condiment vault to get it.

McDonald's seized on this rare, viral opportunity to get people to voluntarily go to their locations again when they weren't high or didn't have enough clean dishes to make something at home. So they announced a special, one-day promotional re-release of Rick's favorite sauce. People camped out and waited in long lines for just a single packet of the stuff, and McDonald's wasn't able to meet the clamoring demand for a tangible sample of a Rick & Morty in-joke. Some who got a packet gobbled them up, collected them and even put them on eBay, like this one that's still being offered for $420 for one helping.

That's when the protesting started. No, really. People caused public disturbances because of a McNugget dipping sauce.

According to Vox, several locations saw crowds choking the entrances to its restaurants with people chanting "We want sauce!" as employees tried to keep the mobs from flooding the dining area. Some stole food, messed up the dining area and harassed employees in some cases to the point cops were called to the restaurants. Eventually, Roiland volunteered a personal apology through TMZ even though he didn't have to because the toxic behavior of his fans is not even remotely his fault.
So, yeah, that probably explains why it's only available through the app this time. You know our dimension is screwed when its inhabitants pattern their behavior on a fictional, portal jumping drunk who risks the safety net of existence for a condiment.
KEEP THE DALLAS OBSERVER FREE... Since we started the Dallas Observer, it has been defined as the free, independent voice of Dallas, and we'd like to keep it that way. With local media under siege, it's more important than ever for us to rally support behind funding our local journalism. You can help by participating in our "I Support" program, allowing us to keep offering readers access to our incisive coverage of local news, food and culture with no paywalls.
Make a one-time donation today for as little as $1.