More hot chicken has arrived. Lauren Drewes Daniels
Another hot chicken sandwich spot is entering the competitive spicy bird market. Hot Chicks Chicken is a locally born concept that started in Plano and has another store at Willow Park in Weatherford. This third installment is at 5609 SMU Blvd, which was previously a Twisted Root.

The restaurant is connected to Texas Republic Bar, which has a highly popular location in Fort Worth in the West 7th area. These two spaces are distinct but connected in that you can order hot chicken while lounging at the bar.

Dylan Lotz with Hot Chicks says everything is made fresh in-house including the spices, coleslaw, fries and pickles. Halal chicken is dry brined for 48 hours before being dipped in peppery oil, dredged and fried up. There are four levels of heat the chicken tenders are rolled in after cooked: mild, medium, hot and hot AF, which has ghost and habanero powder along with Carolina reaper. Chicken can also be ordered without any heat. Lotz says there’s a big jump from medium to hot. We tried the mild and it was tasty with a strong flavor and nice bite but no face sweat. 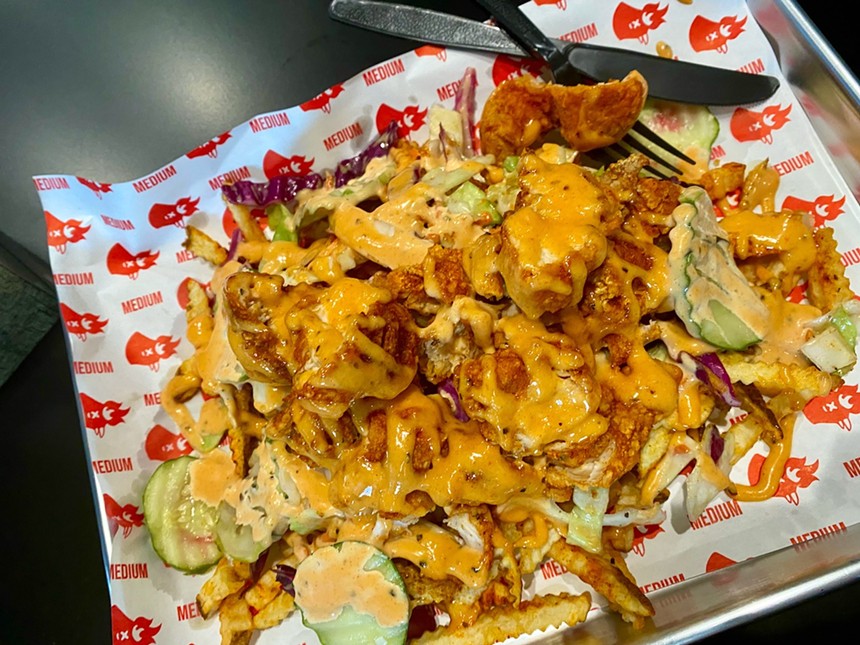 Loaded hot chicken fries with slaw and pickles.
Lauren Drewes Daniels
Frozen boozy drinks come in little plastic hot pink containers that resemble fire extinguishers. Lot z says that at the Weatherford location, their Mambo Margarita is one of their biggest sellers, often sold in half-gallon containers. It's a margarita with a splash of sangria. The Big Red is a slushie made with coconut rum, "magic potion" and Big Red soda. The Red Margarita is the twist of their margarita and Big Red.


Hot Chicks will also have a space for takeout and delivery, which Lotz says has been a thriving part of their other two locations. There are tables out front on the patio and a few inside. It’s a fast-casual setup.

Be on the lookout for an announcement for a hot chicken eating contest for which the grand prize is a year of free chicken. Contestants have to eat three of their Hot AF strips in 15 minutes then have nothing to drink for 15 minutes.

As for the bar portion, Texas Republic Bar and Kitchen in Fort Worth is sort of known for their trashcan nachos. These are nachos that are built in a small trash can, then dumped on your table in a dramatic display. (Also because we should just eat out of pail sometimes.) On a trip there Thursday, they said they’re working on a unique hot chicken version of this item.

The bar is flanked by a huge patio out front with couches and tables to kick back at, a perfect environment to soak up sports and booze. Inside there is a 136-foot LED display — a small movie screen — so you can watch all of the game. 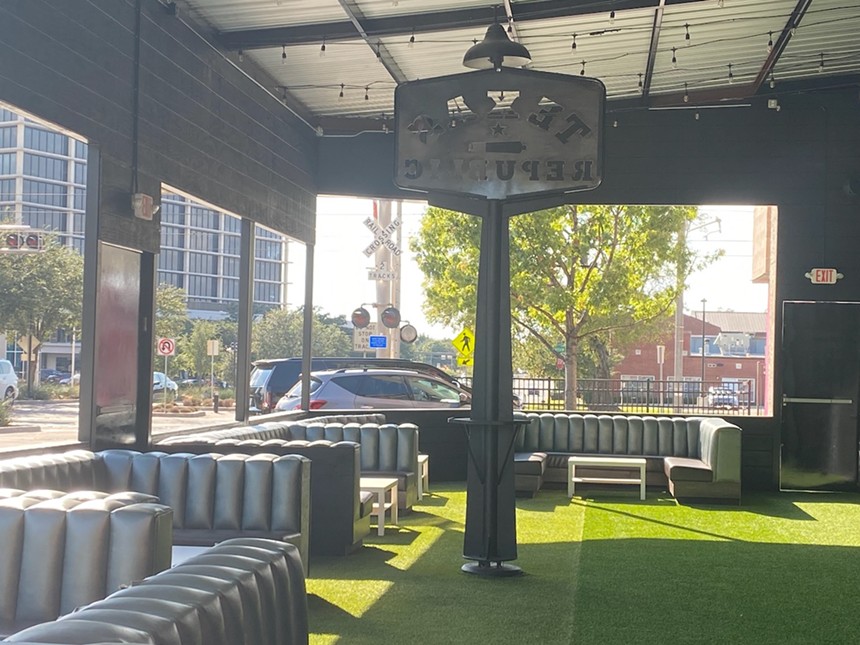 The turfed patio at Texas Republic.
Lauren Drewes Daniels
Neither spot has hours listed yet. Check their website for more information on that.
KEEP THE DALLAS OBSERVER FREE... Since we started the Dallas Observer, it has been defined as the free, independent voice of Dallas, and we'd like to keep it that way. With local media under siege, it's more important than ever for us to rally support behind funding our local journalism. You can help by participating in our "I Support" program, allowing us to keep offering readers access to our incisive coverage of local news, food and culture with no paywalls.
Make a one-time donation today for as little as $1.