At the New Jack's Kitchen, Biscuits and Gravy This Good Deserve a Parade

The interior at Jack's Kitchen, a new lunch, dinner and brunch option in East Dallas. Taylor Adams
Dallas may not be in dire need of another place to get brunch, but Jack's Kitchen deserves a spot on anyone's brunch rotation.

The East Dallas restaurant opened Aug. 1 and is slowly gaining a following, says Scott Jones, the restaurateur behind the concept. Jones was also the one behind the former Screen Door, a fantastic restaurant in the Arts District that served Southern food. He also previously ran Jack’s Modern Southern Kitchen on Greenville.

“It’s just kind of a combination of the things I’ve been doing for the last 20 years,” Jones says. “I wanted to do something that was Southern but had a little bit of other influences, like Italian, which I love, Spanish, which I love.” 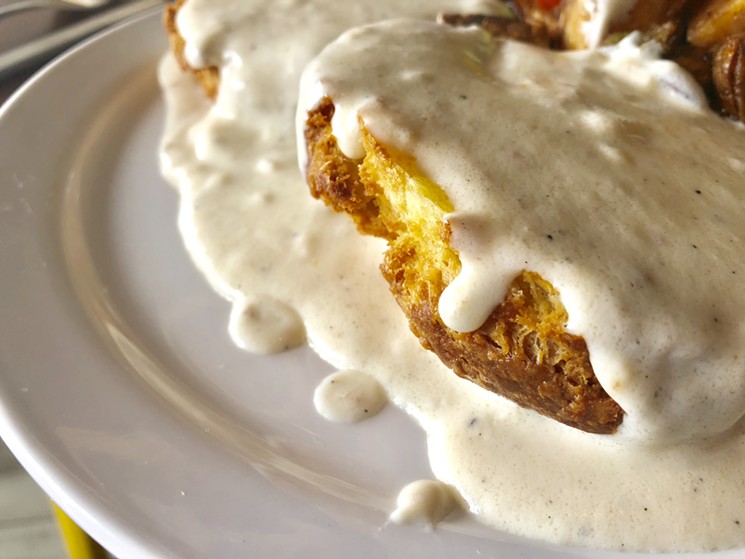 Jack's Kitchen's biscuits and gravy are the gold standard.
Taylor Adams
The brunch menu is wonderful, largely because of a wealth of items that come with black pepper-cream gravy or Jimmy’s sausage gravy. It also gets a boost from Jones' impeccable biscuits, whose dough is sprinkled all over the menu in unexpected places. You can go classic and get sausage over the house-made buttermilk biscuits ($7.95 for black pepper, $9.95 for sausage gravy), or you can try less basic options. The Texas hot brown ($12.95) gets you a biscuit topped with crispy pork belly, Gruyere, Asiago, slow-roasted tomato and black pepper gravy.


"Every stock, biscuit, pastry is made from years and years of recipes." — Scott Jones

The biscuits are better than what you normally find in town, and the gravy is what all other gravys should be. It's an indulgent dish — Jack's Kitchen does indulgent well — but the guilt won’t overload you, because those potatoes are good enough on their own with onion and the perfect amount of bell pepper.

There’s a “Not a Biscuit” section, with items such as smoked chicken and green chile chilaquiles ($12.95) and chicken and waffles ($14.95). Jones likes the shrimp and grit tamales ($15.95) with pan-seared jumbo shrimp topping smoked Gouda-cheddar grit tamales. Then it all gets a chorizo-creole sauce. 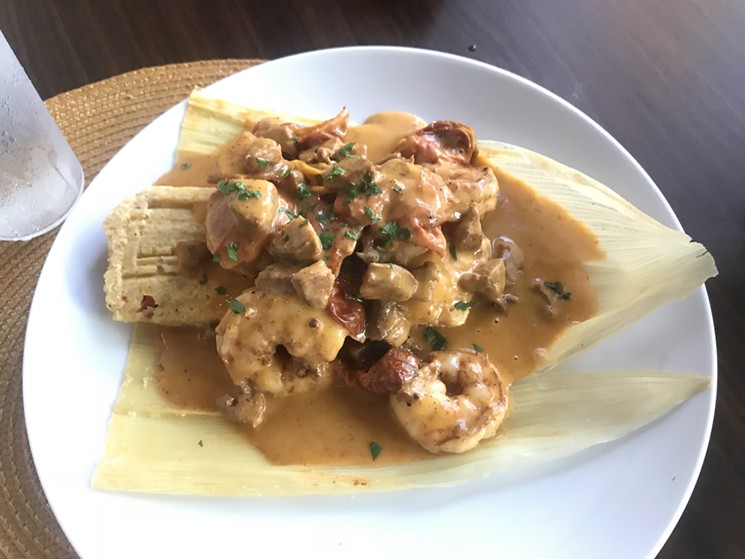 Shrimp and grit tamales ($15.95) are the ideal Southern hybrid.
Beth Rankin
The dinner menu is larger, with appetizers and main courses to share. The crispy fried okra and poblano ($7.95) looks like a nice way to start, followed by some pot roast penne pasta ($14.95).

“I love the lobster and dumplings,” Jones says. “We do a caramelized fennel and celery dumpling, a lobster tail, in a really great lobster bisque sauce.”

It’s only available Friday and Saturdays, though. Daily specials will become the norm once the restaurant gets into a rhythm, Jones says.

Jack's Kitchen's lobster and dumplings is as indulgent as it gets.
Beth Rankin
The restaurateur lives in the East Dallas neighborhood, just two minutes away from his newest endeavor. It makes sense why he doesn’t just want to serve good food, but also serve his community.

“Everything is made from love, made from scratch. Nothing comes out of a can. Every stock, biscuit, pastry is made from years and years of recipes,” Jones says. “I want to provide a service to the neighborhood, where they can come pick up dinner for the family for 20 bucks or come in for a meal. I just want to be a service for them.”

Jack’s Kitchen, 6041 Oram St. (East Dallas)
KEEP THE DALLAS OBSERVER FREE... Since we started the Dallas Observer, it has been defined as the free, independent voice of Dallas, and we'd like to keep it that way. With local media under siege, it's more important than ever for us to rally support behind funding our local journalism. You can help by participating in our "I Support" program, allowing us to keep offering readers access to our incisive coverage of local news, food and culture with no paywalls.
Make a one-time donation today for as little as $1.