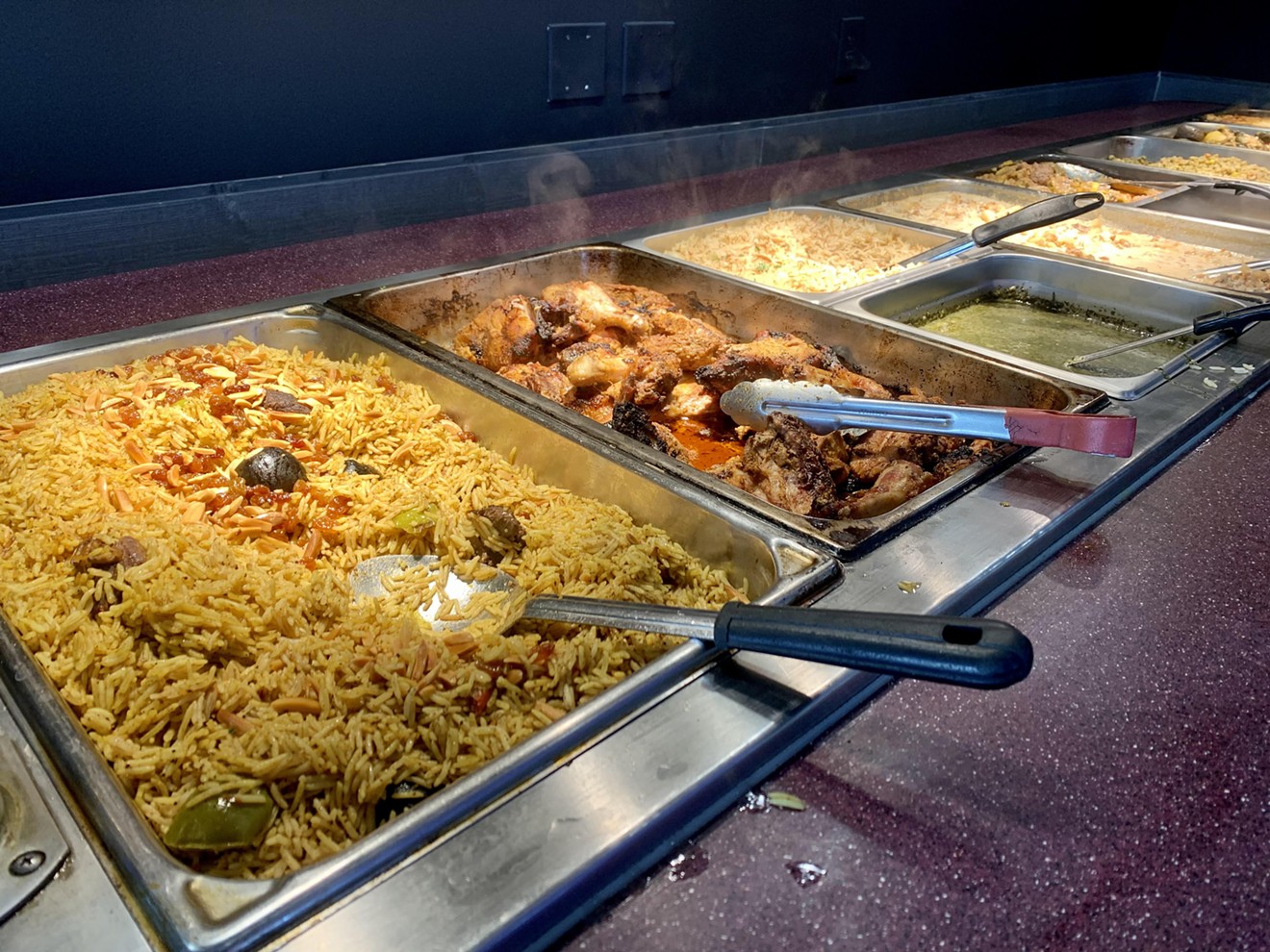 When Nameer Salman bought the business in 2012, Jasmine was a standard college-age hookah lounge and hangout. But he quickly went about transforming it into a proper Mediterranean and Palestinian restaurant equipped with a smoke-free, family-friendly area and a separate area for the dedicated smokers. For years, he built up a reliable clientele from around Dallas-Fort Worth offering halal food cooked and prepared according to Islamic customs.

Last week, Salman and his family inaugurated their new location at 820 S. Sherman St. in Richardson. It’s right off Central Expressway and Spring Valley Road, not far from the original spot. The new property is an upgrade, to say the least, with a smoke-free restaurant, a hookah area and a full-size supermarket stocked with foods and ingredients from across the Middle East.

Salman, 42, said the entire process of moving the business to a new location took about two years. Now, he’s already seeing new customers and longtime regulars alike. “It is a bringing a whole new clientele,” he said. “I’ve got all my regulars plus all kinds of new people coming in.” 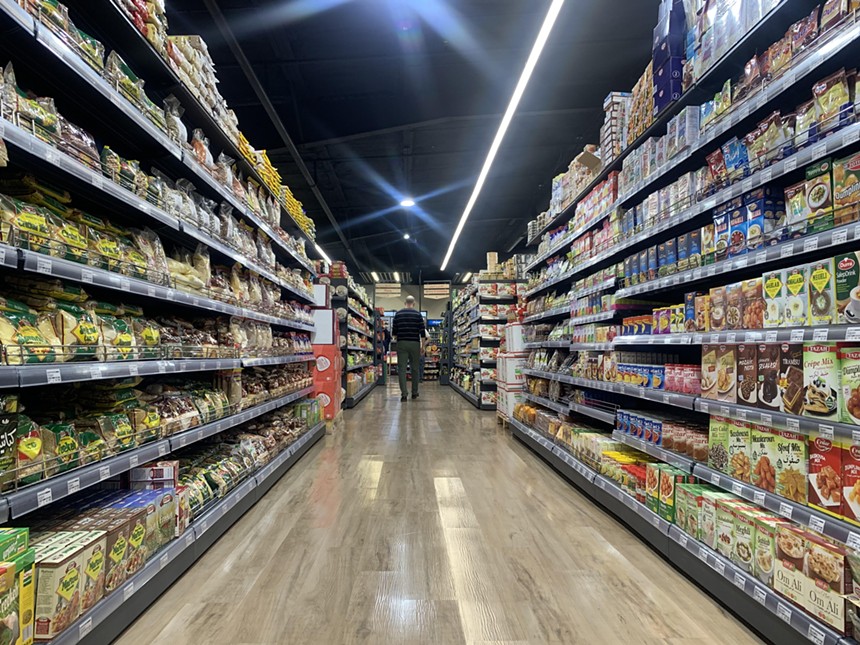 Jasmine Cafe's new location includes a supermarket stocked with foods from the Middle East.
Patrick Strickland
The supermarket is open from 8 a.m. until midnight each day, another new addition that Salman hopes will offer locals more options for shopping for their groceries. “For example, all of our olive oil comes from my family,” he said, explaining that his relatives send the olive oil and olives from the Palestinian West Bank.

On a weekday night, you might find the covered patio full of people grubbing down on Middle Eastern dishes. The hookah area is a casual spot to sit and smoke the night away. All in all, the place has a much more family-friendly vibe than the old location, which was exactly what Salman hoped for. For one, the non-smoking section is much larger than the one at the old location.

As part of the revamp and relocation, Jasmine will eventually introduce a new menu. In the meantime, the menu includes plenty of the regular customers’ longtime favorites. For meat lovers, there are mid-priced options: shawarmas, gyros and kabobs of the chicken, lamb and beef varieties. Some come with tzatziki, others with a tangy yogurt-garlic sauce. The shish tawook plate, which costs $18, comes with two chicken skewers and two sides and garlic sauce. (The portions are massive, and unless you’re a bodybuilder, you might want to consider a to-go box or splitting the meal with a friend.)

“Mediterranean Middle Eastern food is from all over,” Salman explained. “We still do Mediterranean, but it has the Palestinian flavor to it. Every country does it a little different. The way we make it from one place to another is just a little bit different.” 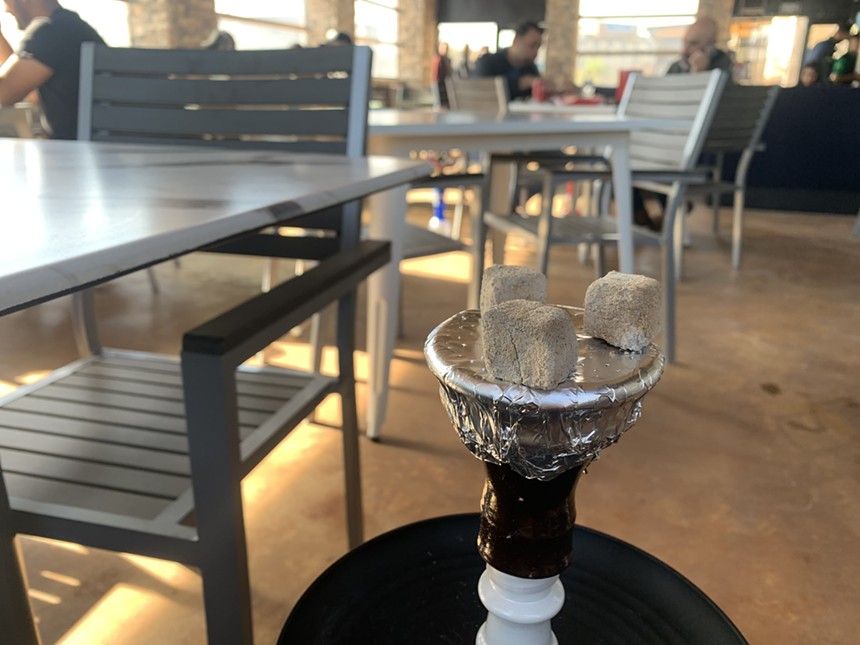 As with the original space, there's a dedicated room for hookah.
Patrick Strickland
Salads run the range of Mediterranean options, with everything from tabbouleh to Arabic salad, from Turkish to Greek salads, and Fattoush. Sides include hummus (with chicken, beef or on its own), baba ghanoush, fried haloumi cheese and foul, which is made of fava beans, olive oil, garlic and lemon. The lentil soup is as delicious as it is affordable, clocking in at only $4. On weekdays, you can also hit up the buffet between 11:30 a.m. and 3 p.m.

But maybe you want to feed the whole family or your pals at the office; Jasmine has you covered for that as well. The “Family Feast,” as it’s called, will run you $120 and comes with hummus, Arabic salad, Greek salad, Turkish salad, baba ghanoush, cauliflower, cucumber salad (with yogurt) and three skewers each of chicken, lamb, beef and kifta. (It might more appropriately be named the “Neighborhood Feast,” but hey, maybe you and yours have impressive appetites.)

And if you want to chill out after your meal, you can sit and listen to the popular Middle Eastern singer Fairuz on the stereo, order a nonalcoholic beer known as Bavaria and a hookah, choosing from any of their dozens of flavors of tobaccos: classics like watermelon-mint, lemon-mint, or orange-mint, for instance, and more contemporary mixes such as sex on the beach or Skittles.

The move to their new location wasn’t easy, but Salman is hopeful that Jasmine will remain a staple on Dallas-Fort Worth’s Mediterranean scene. In the decades to come, he also hopes to open new locations. “Hopefully I will have another three or four places all across Texas,” he said.

Jasmine Café and Hookah Lounge, 820 S Sherman St., Richardson, 11 a.m. – 1 a.m. Monday-Sunday.
KEEP THE DALLAS OBSERVER FREE... Since we started the Dallas Observer, it has been defined as the free, independent voice of Dallas, and we'd like to keep it that way. With local media under siege, it's more important than ever for us to rally support behind funding our local journalism. You can help by participating in our "I Support" program, allowing us to keep offering readers access to our incisive coverage of local news, food and culture with no paywalls.
Make a one-time donation today for as little as $1.