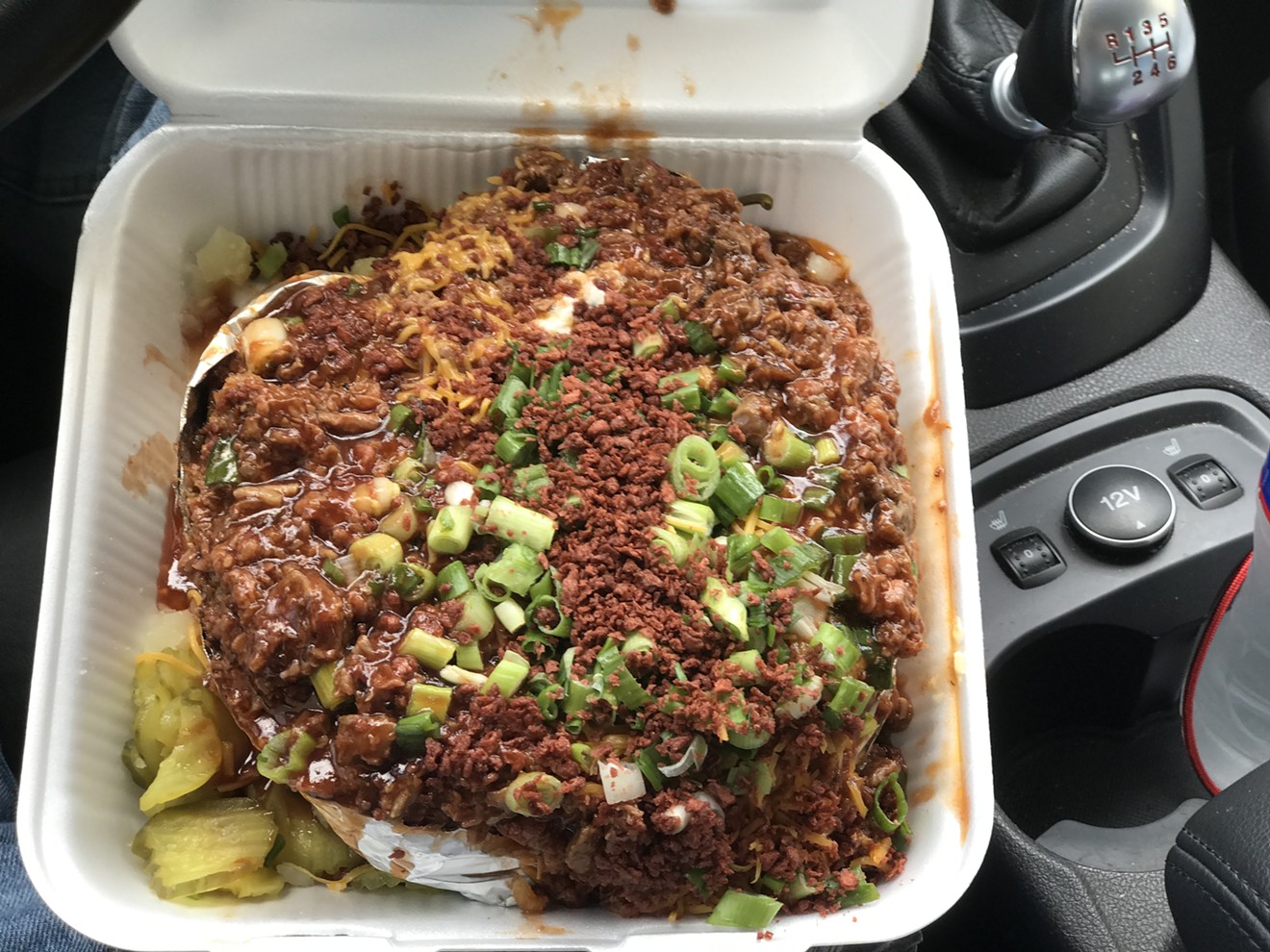 Sweet lord, we've found heaven, and it comes in a styrofoam container. Chris Wolfgang
Like the rest of 2017 America, we like to pretend we're working while we're secretly looking at Facebook in the other browser window. Sometimes, we end up wasting two hours looking at pictures of huskies wearing glasses. But mostly, we're looking at food.

Our latest edible social media discovery pointed us to Kooly's BBQ, an Oak Cliff joint that is turning out a truly massive barbecue stuffed baked potato. Admittedly, we're using "discovery" loosely here; as of this writing, the video showing the making of The Heavyweight potato already has a whopping 3.4 million views. The video has been shared on Facebook more than 40,000 times and has generated more than 11,000 comments.


The video likely isn't garnering views for its production value. Instead, people seem hypnotized by a mutant-sized baked potato topped with enough butter, shredded cheese and sour cream to make your cholesterol spike just by watching, along with some truly superb commentary. ("It's the biggest goddamn potato in Texas, baby.") A heaping pile of sauced and chopped beef goes on next, and barbecue sauce is injected into the concoction and drizzled on top.

Think it's done? Nope. Next up, Kooly's throws sliced hot links onto the pile. Another handful of cheese, a handful of chives, some Bac-Os and more barbecue sauce top it off, at which point there's no way the styrofoam container housing it could possibly close.

Kooly's BBQ serves the loaded baked potato that all your friends are talking about.
Chris Wolfgang
Kooly's is tucked near the end of a worn-down strip mall on Bonnie View Road, and when we arrived, we learned two things that aren't mentioned in the video. First and most important, Kooly's is a cash-only operation, so plan accordingly. Second, carryout is the only option; we stepped inside to find a small alcove perhaps 8 feet square, and orders to go are placed at a small window.

The menu is short; aside from the potato, Kooly's offers sandwiches of chopped beef and plates of ribs and links. In a moment of panic, we ordered a mere "stuffed loaded" potato ($10), which only comes with one meat instead of two, but added a rib sandwich ($8) to go with it. In a few brief minutes, we traded a 20 dollar bill for an impossibly heavy bag of food and were on our way.

As much as we wanted to be food-critic serious, we were eating 3 pounds of barbecue stuffed potato in the driver's seat of a car.
Chris Wolfgang
If you're planning to eat in your car, you'll be pleased to know that said bag of food is stashed with a modest stack of napkins and a pair of plastic forks. All that's left to do is to move the seat back as far as possible, recline a bit and try not to make a mess of your ride. We opened up the container with the potato and dove in.

The potato breaks no new ground, barbecue or otherwise, and that's fine with us. We're buying quantity here, and in that regard, Kooly's delivers. If we were to put on our food critic hat, we'd mention that the sauce being used is neither overly spicy or excessively sweet, but there's so much of it that any beef flavor is drowned out. But it's difficult to be serious when there's 3 lbs. of stuffed potato in your lap. Instead, we made hay with forkfuls of buttery, cheesy barbecue potato goodness and kept finding little surprises, like a stash of pickles in one corner of the container, or a whole jalapeño buried under an avalanche of toppings on the other side.

Kooly's ribs, shown here on a freakishly large sandwich we were almost too full to touch, are nevertheless a winner.
Chris Wolfgang
For a bit more "real" barbecue, get the ribs; they're sauced as well but cooked almost perfectly and had great pork flavor. And in keeping with the Kooly's theme, the rib sandwich is comically large, with over a pound of ribs tucked in between an oversized bun. A side of pickles and sliced jalapeños come on the side to dress up the sammy. In full disclosure, we didn't even dig into the sandwich until we got home, and could only eat a rib or two before throwing in the proverbial towel.

With portions this big, a trip to Kooly's for a workday lunch is certain to induce a mid-afternoon food coma once you're back at the office. How you sneak in a nap without your boss finding out is on you.