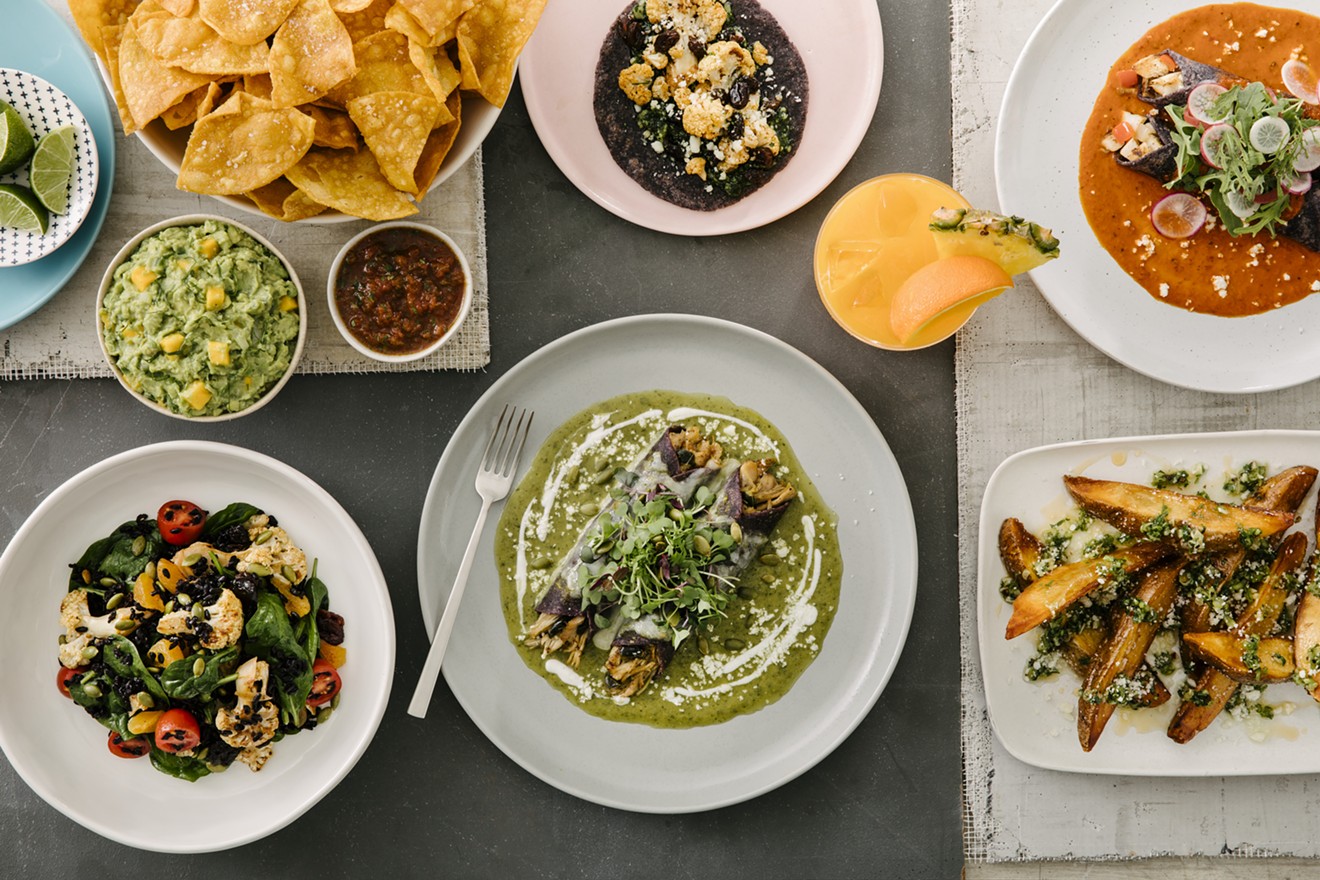 “Fine-casual,” is apparently a phrase credited to Shake Shack founder Danny Meyer. courtesy of LADA
Hillcrest Village, a long-neglected shopping center on the edge of Richardson, has been in the news lately as the site of a new community park billed by some as a “mini Klyde Warren park.”

But the revitalization of the center was already off to a good start when LADA opened there last fall.

The fine-casual restaurant with a menu centered on enchiladas is chef Michael Ehlert’s first turn in an owner-operator role. And in a way, it’s a culmination of the most important things Ehlert has achieved in his career, which has involved a series of executive roles in high-profile Dallas restaurants.

As chef de cuisine at the beloved Hibiscus, Ehlert was instrumental to the restaurant adopting local sourcing of produce and Texas grass-fed beef. At LADA, the same care and commitment to local sourcing makes its way into familiar, yet reimagined, dishes.

Cider-glazed steak, orange-pepper carnitas and shiitake mushroom are just a few of the enchilada options that incorporate locally grown vegetables. The house-made tortillas are crafted from Texas-grown and milled blue corn, while petite greens and flowers garnish the pretty plates.

Mango guacamole
courtesy of LADA
Fresh flavors appear throughout the menu categories, in sides of elote on a stick or mango guacamole, as well as chicken tortilla soup and arugula-carrot or kale and quinoa salads. Seasonal aguas frescas, such as pineapple-orange and ginger-pear, bring peak flavors to the beverages, too.

The menu was a long time in the making; Ehlert spent more than two years developing his creative take on some Tex-Mex favorites.

This might feel like déjà vu to food news followers. Ehlert spent a similar amount of time reinventing the menu at The French Room during his time as executive chef there, after earning four stars at Front Room Tavern and before moving on to Mirador.

The long-term development projects seem at odds with the revolving-door perception of chefs, but the situations that bring that about aren’t always what they seem.

“It’s rather like being an NFL coach,” Ehlert says. “If you have a winning season, you're in, and if you don’t, you’re out. It doesn’t mean you’re a bad coach. ... It always was important to me to look for something that was the long game.”

He appears to have embraced the role of coach, providing an intense level of culinary training to the kitchen staff at LADA.

“I would remind us all that the word 'chef' in French simply means chief — you’re the person in charge,” Ehlert says. “It’s ultimately a delegating role in its perfect sense. But if you can’t walk through the jobs of every single person, you’re not really doing it.

“A lot of the way we train up cooks and bring them up in the organization, it’s about relationships,” Ehlert says. “All of hospitality is about relationships. You have to find what someone’s strengths are. Do they have knife skills? Do they know how to chiffonade something? And from there that evolves into anything that they want it to evolve into. ... If you come onto my team, I’m going to invest in you in a big way. But I have to see the return.”

Elote
courtesy of LADA
LADA also gives Ehlert an opportunity to invest in something else that’s important to him — approachability.

“We’re outstanding in the market because we have worked very hard to find that intersection between something that is really high-touch and focused on and cooked well, but meets that everyday price point, or just above it,” Ehlert says.

It’s not just the food that solidifies the fine-dining feel in the counter-service space. Decor in the ample dining room combines earthiness with elegance, bringing together stunning ceiling art, a hand-woven tapestry menu board and comfortable seating upholstered in cheerful tones.

“Half the people that come in here think it’s a full-service restaurant, and they’re looking for a person to seat them,” Ehlert says. “And that’s the biggest compliment to me. That’s what I was aiming for the entire time.”

The restaurant also has a spacious patio facing the coming-soon community park. Both the restaurant and the park will play a major role in bringing the neighborhood to life again. LADA is already doing some other revitalizing with its menu of artisanal takes on Tex-Mex. Perhaps it will inspire more fine-casual dining in Dallas, too.

LADA, 6859 Arapaho Road, No. 601 (Far North Dallas). Open 11 a.m. to 9 p.m. Tuesday through Sunday.
KEEP THE DALLAS OBSERVER FREE... Since we started the Dallas Observer, it has been defined as the free, independent voice of Dallas, and we'd like to keep it that way. With local media under siege, it's more important than ever for us to rally support behind funding our local journalism. You can help by participating in our "I Support" program, allowing us to keep offering readers access to our incisive coverage of local news, food and culture with no paywalls.
Make a one-time donation today for as little as $1.