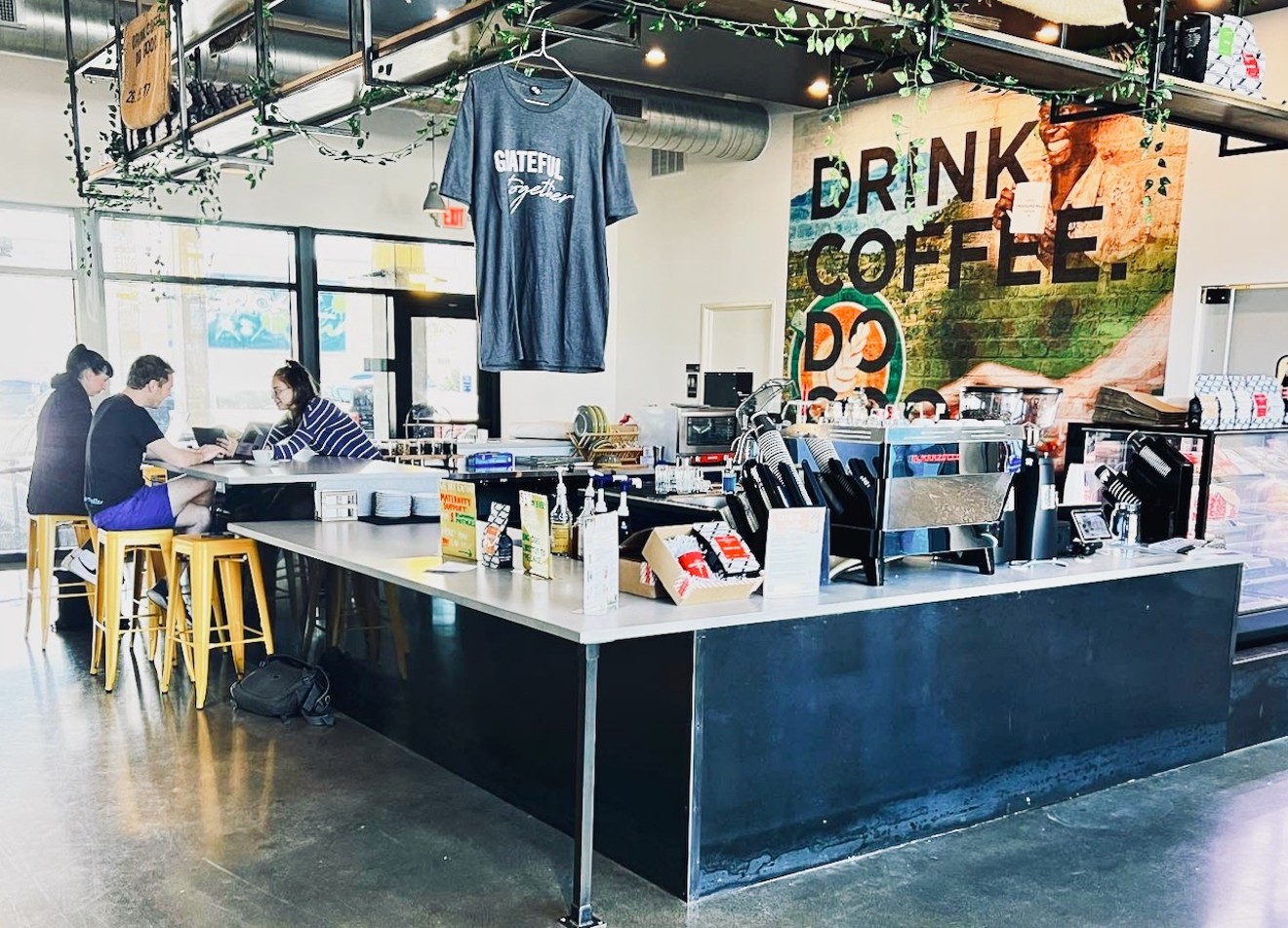 LTH is located on the bottom floor of the Novel Deep Ellum building. Randee Flores
Drink coffee. Do good. This is the modus operandi of Deep Ellum’s newest coffee shop, Land of a Thousand Hills Coffee (LTH), which opened last December. Originally based in Roswell, GA, LTH aims to serve delicious caffeinated beverages while giving back to the Rwandan communities where they get their coffee beans.

LTH’s founder Jonathan Golden built the company’s first washing station — where growers take coffee cherries after harvesting them — in the Ruli farming region of Rwanda. This was a period following the collapse of farming after the Rwandan Civil War in 1994. Golden built the washing station to help create employment opportunities and unify the people of Rwanda. It started with a 12-pound primo roaster, and Golden hired a consultant to teach him how to roast beans.

Today, LTH works with over 10,000 Rwandan farmers, with the mission to support development initiatives and pay farmers fair wages.

Randee Flores is LTH Deep Ellum’s community manager. Flores and her husband, Bryce, founded a mobile coffee bar called Slang with the purpose of providing access to fair-trade and high-quality coffee beverages. They were both drawn to LTH’s mission of giving back to farmers in Rwanda.

“[LTH] aligned with a lot of values that we had with Slang,” Randee says. “The story behind the beans is really great. Everything comes from Rwanda, all of our farmers own their farms and we pay them five times fair trade. It's just a really wonderful thing.”

LTH, which is inside the Novel Deep Ellum residence building on Canton, offers spaces to co-work or just chill. They serve pastries, smoothie bowls and kolaches in addition to coffees and teas.

A cinna-honey latte at Land of a Thousand Hills Coffee in Deep Ellum.
Alex Gonzalez
The cinna-honey latte is a signature beverage, which, as its name suggests, is a traditional latte beverage with touches of cinnamon and honey ($5.50); try this one with oat milk. Another good choice is the dirty chai latte, a wiry combination of black tea infused with cinnamon, clove and other warming spices combined with a double shot of espresso and steamed milk ($7).

In addition to supporting farmers and communities of Rwanda, LTH Deep Ellum aims to support the local artistic community. During our visit, local photographer and gallery curator Imani Black was setting up for the coffee shop’s first art gallery appropriately titled “Drink Coffee. Do Art,” which is set to run through April 15. 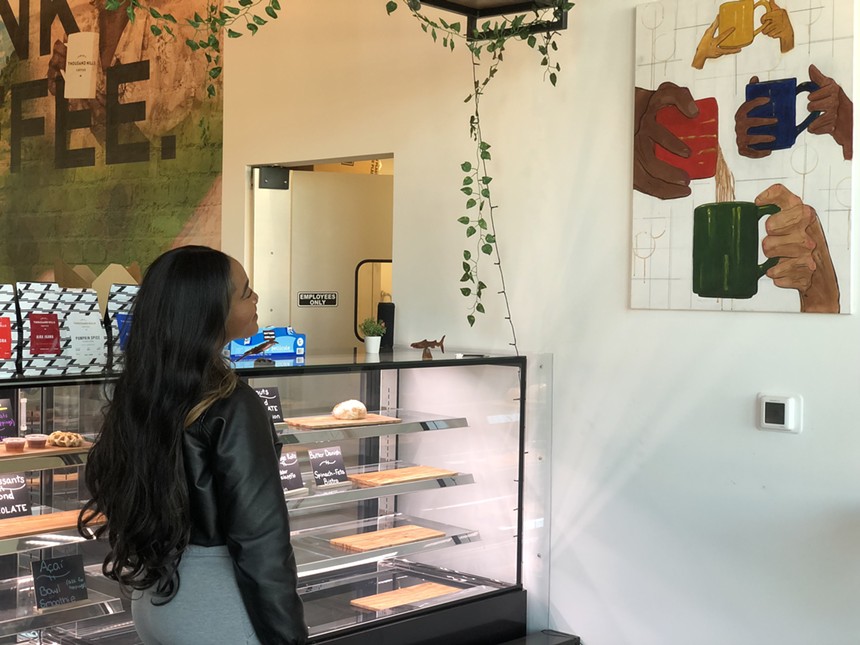 Imani Black admires a painting by a local artist inside Land of a Thousand Hills.
Alex Gonzalez
“I love LTH’s simple statement, ‘Drink coffee. Do good,’” says Black. “That really just speaks to what the company does beyond being just a coffee shop. When we were thinking about name [for the gallery], we asked ourselves ‘What can we do to introduce this new coffee shop as a center for people to come and be themselves?’

To find artists, Black shared calls for proposals on Instagram and sourced canvas paintings and photos from local artists. Among the works of “Drink Coffee. Do Art,” are reflections of pop culture, images of the city and a stickered map of Dallas on the wall.

“I’ve been coming to Deep Ellum for years because I love everything it has to offer,” Black says. “The food, the arts — there’s just so much to do here, and it’s amazing."

In addition to great coffee and great art, Deep Ellum residents and employees can get a 10% discount at LTH Deep Ellum.

Land of a Thousand Hills Coffee. 2900 Canton Street (Deep Ellum). Open 6:30 a.m. to 4 p.m. Monday through Thursday; 6:30 a.m. to 6 p.m. Friday and Saturday; 6:30 a.m. to 4 p.m. Sunday.
KEEP THE DALLAS OBSERVER FREE... Since we started the Dallas Observer, it has been defined as the free, independent voice of Dallas, and we'd like to keep it that way. With local media under siege, it's more important than ever for us to rally support behind funding our local journalism. You can help by participating in our "I Support" program, allowing us to keep offering readers access to our incisive coverage of local news, food and culture with no paywalls.
Make a one-time donation today for as little as $1.