The Marfa Restaurant on the James Beard Foundation’s Radar The desert land of Texas has gained attention for its food. Taylor Adams
Alex Gates, chef-owner of Cochineal in Marfa, doesn’t know who nominated her for a James Beard Award, which is not surprising for an award that holds an open nomination process on the internet (my Papa John Schnatter nomination went nowhere).

What is surprising is that a semifinalist spot would go to a small restaurant in a tiny, famously inaccessible town of 1,700 people 500 miles west and 4,000 feet up from Dallas.

This is the first year the James Beard Foundation has treated Texas as its own region for the Best Chef category, so maybe that allowed space for a Marfa restaurant. Indeed, Laurie Williamson of Rancho Loma in microscopic Talpa is a semifinalist as well. Texas road-trippers might notice that the only Best Chef candidates from outside the state’s population centers are located on the only road connecting Marfa, Talpa and Dallas, which suggests how the reviewers got to Marfa.

Marfa may be small, but with an outsize media footprint and more than 40,000 visitors a year, it’s nice to see one of its talented chefs get some recognition. Name another town Marfa’s size that supports three fine-dining restaurants and more than a dozen more casual joints across a broad spectrum of cuisines.

Gates is a food industry veteran.


Texas road-trippers might notice that the only Best Chef candidates from outside the state’s population centers are located on the only road connecting Marfa, Talpa and Dallas.

For several years she was the food and beverage director at the Liz Lambert hospitality company Bunkhouse and executive chef at its premier property Hotel Saint Cecilia. She has experience in event planning, front-of-house service and “every aspect of running a restaurant.” That is, except proprietor, until she came to Marfa.

Gates and husband James Harkrider started coming to Marfa from Austin as tourists in the mid-2000s, and in addition to loving the town’s (is there any way to write about this place without using “eclectic” or “quirky”? no, there is not) quirky charm, they quickly made friends with Marfa’s food industry pros.

Gates remembers being impressed with Christa Steinhauer’s and Adam Bork’s Food Shark, still one of the great food trucks going. Her boss Lambert developed the Thunderbird Motel in the same period (she no longer operates it).

And Gates and Harkrider came to be friends with Tom Rapp and Toshi Sakihara. Rapp and Sakihara founded Cochineal as an elevated, interior Mexican restaurant and as a semi-retirement project after selling their successful restaurant Etats-Unis and escaping the winters in New York City.

The couples became close enough friends that when Sakihara was diagnosed with cancer in the mid-2010s, he and Rapp began to talk to Gates about taking over the restaurant.

Gates and Harkrider both had good jobs in Austin and were established in the community, serving on the board of Fresh Chefs Society together. They didn’t think they were ready to move to a small town and be completely dependent on a small business.

Less than a year later, Gates was diagnosed with breast cancer. Though frightening, her treatment at MD Anderson was “amazing,” she says, and she learned she was fortunate to have a very treatable variety. “There are all kinds of cancer that you learn about that you didn’t want to know about.” 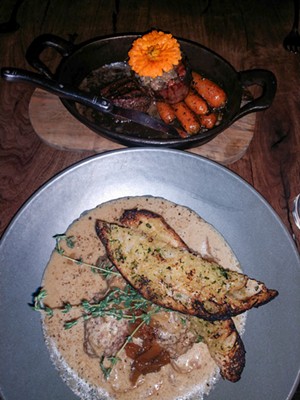 Part of a recent dinner at Cochineal
Philip Kingston
The experience left her feeling that “life is short,” and she and Harkrider reopened discussions with Rapp about taking over Cochineal, which had been open more sporadically since Sakihara’s death. In early 2017, they bought the property, including the house where they live, and on Sept. 1, 2017, the new Cochineal Gates made its debut.

Gates describes her style as European. Her mother is Swiss, and a recent menu featured a delicious charred cauliflower as an appetizer and nilgai meatballs that wouldn’t have been out of place on a fine-dining menu in central Europe except for all the Texas ingredients (OK, nilgai are historically Indian; Sam Houston was historically Virginian; nilgai are Texan now). In fact, Gates has been sourcing every ingredient except seafood from Texas, much of it more local than that. She employs a gardener named Mr. T to grow a large variety of vegetables and herbs on her property, and she buys from an urban farm in Alpine and a specialty farmer in Fort Davis.

Gates is not shy, but for a chef-owner getting as much award and media attention as she is, she’s noticeably quick to credit others. She says she was fortunate to work in female-owned businesses after “seeing a lot of male-dominated kitchens.” I ask if she means like Kitchen Confidential. “Yes!” She says, “I’m lucky to have had these female mentors.”

Even the success of the restaurant she credits to her team. In a market as small as Marfa, hiring can be tricky.

“I feel fortunate with people who came to work with me,” she says.

It took her a full year to get the team right: “I don’t have big quantity, but I have great quality.”

She loves the other chefs and concepts in town. She calls Steinhauer “a huge asset to Marfa,” and she intentionally staggered Cochineal’s off nights with Steinhauer’s Stellina to ensure customers always have access to one or the other.

Marfa has a complicated social and political scene for a town of its size, but it has suited Gates and Harkrider well. They’re habitual volunteers with long experience caring for disadvantaged children. That’s a valuable commodity in a county with an area median income of under $30,000 a year and income inequality unreplicated outside of big cities.

Alex Gates (from left), James Harkrider and Keanna Gates-Harkrider
courtesy Alex Gates
Marfa has been good for them in one other important way. Through their work with foster kids in Fresh Chefs Society, Gates and Harkrider began volunteering at a group home called Helping Hands Home in Austin, and that is where they met Keanna — now Keanna Gates-Harkrider — who joined their family in 2015 when she was in seventh grade (and weeks before Gates was diagnosed with cancer).

Growing up in the foster system, Keanna was used to the small numbers of children in group homes where she lived. The larger schools in Austin could be intimidating. Keanna thrived in Marfa’s tiny school system. Gates thinks the kids are nicer and appreciates all the “eyes” in town. Keanna will attend Texas Tech University in the fall (assuming anyone’s attending anything in the fall).

We don’t know who sent the James Beard Foundation to the Chihuahuan Desert, but they found a chef making good food and a good life.
KEEP THE DALLAS OBSERVER FREE... Since we started the Dallas Observer, it has been defined as the free, independent voice of Dallas, and we'd like to keep it that way. With local media under siege, it's more important than ever for us to rally support behind funding our local journalism. You can help by participating in our "I Support" program, allowing us to keep offering readers access to our incisive coverage of local news, food and culture with no paywalls.
Make a one-time donation today for as little as $1.