Nova is a regular spot for people who live around West Davis Street. Alison McLean
In this combustible moment of national reckoning, restaurants and culinary leaders across the United States are being held accountable for incidents of racism. They are also facing the tricky balancing act of determining what punishment fits what crime — and whether the alleged misconduct really took place.

That balancing act arrived in Dallas Sunday, when an upset customer posted an online review recounting a dinner at which a restaurant’s co-owner shouted racist and homophobic slurs while drinking an entire bottle of wine. But, according to others involved with the restaurant, there is a possibility that the lurid account of misbehavior is exaggerated or mistaken.

Stephen Shayne Booth’s review tells at length of his meal at Nova, the gastropub on West Davis Street in North Oak Cliff. Booth begins by praising the “great” food before turning to his encounter with a part-owner, whom he says was seated alone at a table blocked off to comply with coronavirus restrictions. According to Booth, the part-owner was drinking an entire bottle of wine, watching television news reports and “using racial slurs.”

“I turned around and corrected him twice,” Booth wrote. “I was appalled and more offended that he was getting louder and louder. My words and pleas just kept going over his head. It was very difficult to eat our meal and enjoy ourselves with this drunken, disgusting and sloppy middle-aged man behind us.

“Luckily, the news was over and on came a summer sports program (Ultimate Tag),” the post continues. “Surely, change of programming would quiet this imbecile down. Nope! This same man kept using homophobic slurs to now describe the sport itself to the people across the room. I turned around and addressed it. He kept saying it was a ‘gay sport’ and it was a ‘faggot sport.’” 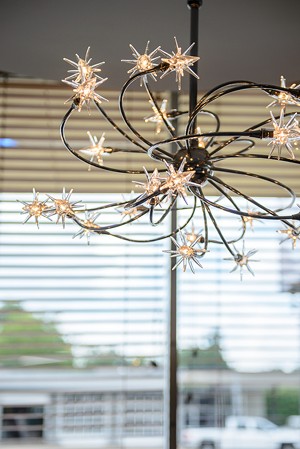 Although it is unclear exactly what happened at Nova during that meal, Reid says he will continue to discuss matters with Booth and hopes to meet Booth in person to try making things right.
Alison McLean
Booth posted his description of the alleged drunken rant to Nextdoor, Yelp, Tripadvisor, his personal Facebook page, Nova’s Facebook page and several private Facebook groups, including Oak Cliff Neighborhood. When Oak Cliff Neighborhood removed his comments, Booth returned to post a link to his Yelp review.

Booth did not respond to multiple Observer requests for comment.

J.D. Reid, one of Nova’s other owners, was not present at the time of the alleged incident. Reid has spent the days since interviewing witnesses, including both customers and employees, to determine what happened. He also quickly suspended the co-owner from active day-to-day involvement at Nova. (Neither Booth nor Reid named the co-owner.)

“The gentleman in question has been taken out of operations just so I can assess and take it from there,” Reid says. “We can’t legally say hey, poof, you’re gone, you’re not an owner anymore.”

Reid is open about his attempts to corroborate the facts of the incident. But, so far, he has only had partial success.

“I chatted with the gentleman [Booth], he gave me his version of the story,” Reid explains. “I wasn’t present. He thanked me very much, and I talked to other people that were there. There were differing accounts of what actually transpired. I’m not going to chastise the man. He feels like that was his experience. I can’t say ‘you’re wrong,’ you know? Like I said, I wasn’t there.”

But, according to Reid, the other people present at the time only witnessed a fraction of the behavior Booth alleges.

“He [the co-owner] didn’t call them the F word, didn’t threaten them, wasn’t sarcastic to them at the end,” Reid says. “He did say something stupid about the wrestling. Someone switched the TV to wrestling, I have no idea what kind of wrestling it was, and he said, ‘That’s gay.’ Which is inappropriate in any sense of it. For that he’s completely in the wrong, yes. Stephen turned around and said, ‘What’s gay?’ It just blew up from there.”

Reid verified that the co-owner had two glasses of wine — not a bottle — and believes that the man may have sat at a blocked-off table briefly, but then moved to the bar to watch television. Reid wasn’t sure whether the channel was ever tuned to news broadcasts, but KDFW airs Ultimate Tag on Saturday nights immediately following a news program.

Through Reid, the implicated co-owner did not reply to a request for comment, but Reid offered a summary of the man’s feelings: “He’s a wreck. He feels like he’s just been decimated.”

Nova to go from earlier this week: Yes, the fried pork holds up well, even in take-out form.
Taylor Adams
The incident is especially surprising, and upsetting, because of Nova’s reputation as a liberal bastion and a welcoming hangout spot.

“I am the most liberal guy in the world,” Reid says. “It’s not a culture we propagate at the restaurant. If you walk in there, it looks like a Benetton commercial.”

Reid’s wife is black, as was Nova’s longtime executive chef, Eric Spigner, who departed during the coronavirus crisis.

Although it is unclear exactly what happened at Nova during that meal, Reid says he will continue to discuss matters with Booth and hopes to meet Booth in person to try making things right. Meanwhile, Nova’s fans are rushing to defend it online, while other commenters are permanently disavowing the gastropub.

“I have been going here for many years but I cannot give money to a place which is owned by someone with such violent and destructive social views,” one commenter wrote. “I will be spreading the word far and wide about this.”

As for Reid, he wishes he could unearth the truth and deal with the co-owner civilly, without a confrontational ruckus.

“What’s killing me is people going on these sites and going at each other,” Reid says. “And then it digs up more comments of, 'Oh, that one time I got bad service. There aren’t enough healthy options. Someone’s left a toilet seat up.' People are so divisive at the moment. They just want to go at each other. Take a moment to step back and take a moment to appreciate each other rather than go at each other.”
KEEP THE DALLAS OBSERVER FREE... Since we started the Dallas Observer, it has been defined as the free, independent voice of Dallas, and we'd like to keep it that way. With local media under siege, it's more important than ever for us to rally support behind funding our local journalism. You can help by participating in our "I Support" program, allowing us to keep offering readers access to our incisive coverage of local news, food and culture with no paywalls.
Make a one-time donation today for as little as $1.