Aurelio “Nuno” Arias Jr., formerly the co-owner of well-known El Palote Panadería in southeast Dallas, sold his shares of the family business to go in a slightly different direction, in a different neighborhood.

Arias’ mission with Nuno’s is to get carnivores to enjoy vegan comfort food, or at least try it without asking for their money back. If that eventually segues into a healthier lifestyle, even better.

“It’s easy to sell vegan tacos to vegans,” he says.

But if non-vegans enjoy his food enough to possibly reconsider their diet, that’s success to him.

Arias admits Nuno’s isn’t necessarily health food. With oils and sodium still in use, he calls it “healthier food.” But he’s a proponent of veganism because he saw the effects of an animal product-free diet in his father, Aurelio, who became vegan for health reasons when “vegan” wasn’t a word most people understood. 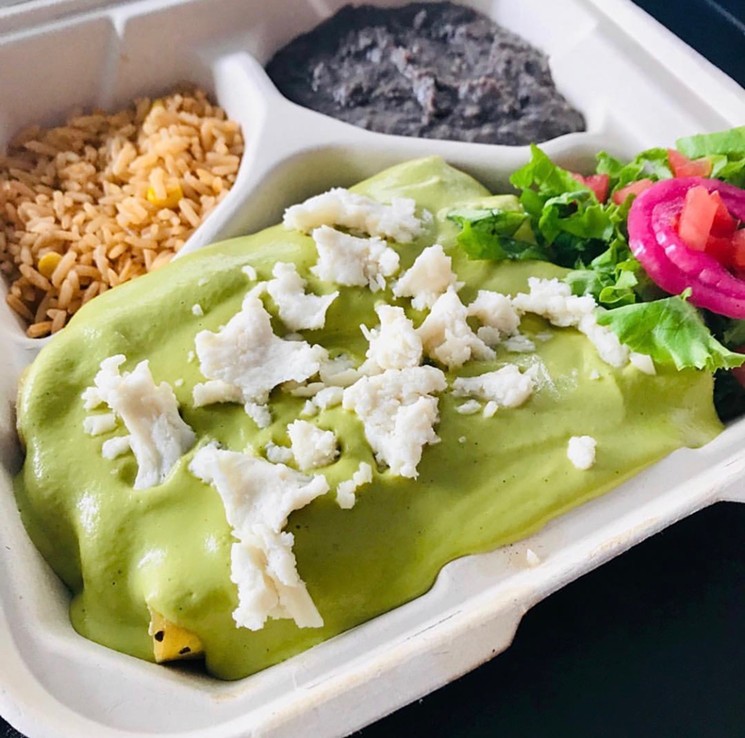 Roasted poblano enchiladas
Nuno's Tacos and Vegmex Grill
“My dad was never pushy about the changes,” Arias says. “He led by example, and when I saw how a vegan diet enabled him to stay fit enough to keep working in construction, I decided to become vegan, too.”

With his father’s experiments at texturing proteins and his mother Lily’s background in the bakery business, Arias credits both of his parents as responsible for raising him and his brother in the kitchen.

After becoming vegan, Aurelio Sr. spent his days off experimenting with recipes, and the family started selling baked goods from their home.

Rules for home food businesses outlined in the Texas Cottage Food Law include a clause about not being a nuisance to the neighbors, however.

Arias recalls there were times when lines on the weekends created traffic. He doesn’t know who complained or why, but for some reason the city of Dallas shut down the Arias family's home bakery.

That’s when Nuno had the idea of opening a vegan-friendly panaderia. Because of customer demand, it went completely vegan within the first year.

Now El Palote is an established Dallas landmark that steadily attracts vegan out-of-state visitors as well as meat-eating city residents, and Arias is ready to do something for his own young family of five, and he wants to remain in Latino communities. 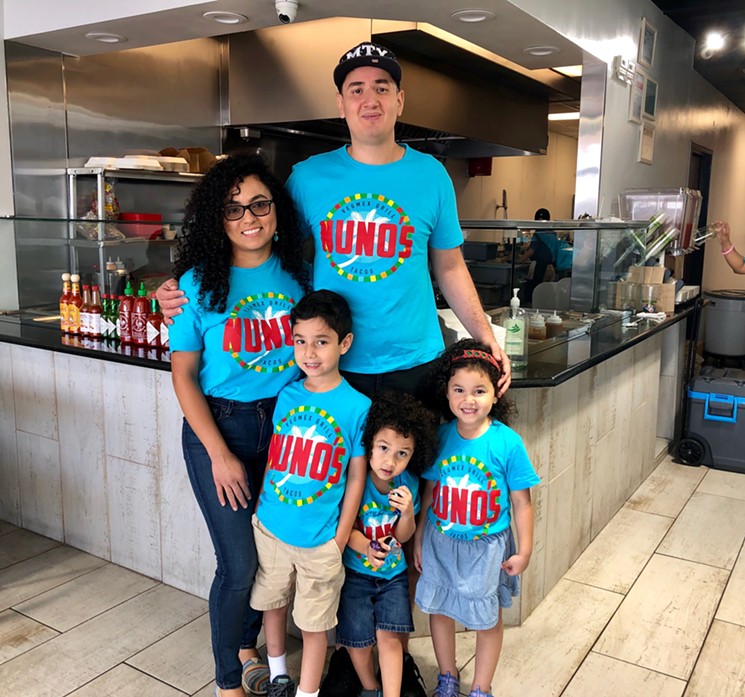 The Nuno's family
Amanda Albee
His fast-casual storefront at the corner of Spring Valley and Coit roads is across from a Fiesta Mart parking lot.

He proudly points out, “You don’t have to go to Oak Cliff for Mexican food anymore.”

Nuno believes Latino families surrounding the area want healthier options, and he also realized many of the people coming to his pop-ups and visiting the Farmers Market stand were driving from North Dallas.

He hopes to continue opening small locations until one day becoming a franchise. The first two weeks of opening were busy, and the kitchen ran out of several ingredients.

Arias says his fans showed their support by visiting during that period, and they couldn’t supply the demand. At the time of this writing, the only negative reviews we could find were people complaining about menu availability and price changes.

Otherwise, people love it — vegans and non-vegans. Vegans are bringing their carnivorous friends and family, many of whom report never realizing they were eating chimichangas and tortas with alternate proteins.

Non-vegans who don’t mind occasionally forgoing meat come to dive in to huitlacoche quesadillas and al pastor-loaded nachos. Overall, customers are incredulous at the food and the verisimilitude of its Tex-Mex counterparts. There is no denying Arias is a wizard with soybeans.

But not all the menu is complex conversions of soy products.

Huitlacoche, a fungus also known as Mexican truffle, is delivered in vacuum-sealed bags from Mexico and combined with housemade mozzarella cheese in the huitlachoche corn quesadillas.

Chipotle jackfruit shredded to resemble chicken can come on a taco or in enchiladas with roasted poblano-cashew cream and fermented cashew panela cheese.

Arias credits fermentation for the taste in much of his food. He disclosed to us that the beef flavor in the deshebrada shredded beef and bistec ranchero comes partly from fermented tomatoes.

What could be the rarest and most creative vegan protein is the barbacoa de flor de jamaica. Hibiscus flowers are prepared to resemble a guiso, like stew, then combined with another ingredient Arias keeps secret. He will only say it comes from Mexico, and only one fine-dining restaurant in Dallas buys it from his supplier. Because of the difficulty of obtaining this secret ingredient, it often sells out. Al pastor tostada
Amanda Albee
It isn’t just the food at Nuno’s that is environment- and animal-friendly. There are also no straws, no plastic bottles and all materials used in the restaurant are 95% biodegradable.

When asked if he believed a vegan diet can really affect the planet enough to counteract tragedies such as the Amazon forest fires, Arias responded, “As the population grows, we continue to affect the earth. We can’t change that. We really don’t know if Mother Nature is going to be able to continue to balance us out. But we do know that a vegan diet requires less land. We know that natural habitats are being torn down for animal agriculture.”

Even taking into consideration the amount of land required to grow soy and vegetables, a recent study published by Science journal confirms: “A vegan diet is probably the single biggest way to reduce your impact on planet Earth, not just greenhouse gases, but global acidification, eutrophication, land use and water use.”

Today, Taco Cabana and KFC now offer vegan alternatives on their menu, a veritable sign veganism is now almost mainstream. But will those items tempt a carnivore? Likely not. But at Nuno’s Tacos, the food is good enough to make carnivores return for more.

Nuno’s Tacos and Vegmex Grill, 8024 Spring Valley Road (North Dallas). 972-685-2703. Open 11 a.m.-8 p.m. Wednesday-Thursday; 11 a.m.-9 p.m. Friday-Saturday; 11 a.m.-3 p.m. Sunday; closed Monday-Tuesday.
KEEP THE DALLAS OBSERVER FREE... Since we started the Dallas Observer, it has been defined as the free, independent voice of Dallas, and we'd like to keep it that way. With local media under siege, it's more important than ever for us to rally support behind funding our local journalism. You can help by participating in our "I Support" program, allowing us to keep offering readers access to our incisive coverage of local news, food and culture with no paywalls.
Make a one-time donation today for as little as $1.
Amanda Albee
Contact: Amanda Albee