First Look: On Rotation Brewery and Kitchen Opens in The Braniff Centre

Boarding passes serve as table toppers and menus at the new On Rotation Brewery and Kitchen near Love Field. Kristina Rowe
After a year or so that must have felt like a comedy of errors to owners Jacob and Lindsay Sloan, On Rotation has finally moved into The Braniff Centre on Lemmon Avenue. The brewpub originally opened in the Lakewood area in 2015, but they needed new digs. Real estate was hard to come by in their neighborhood (or all of Dallas). Eventually, they landed in the historic building that was once The Braniff Airlines Operations and Maintenance Base and transformed it into a taproom and production facility showcasing their beer as well as their new food program.

“Our love of brewpub culture and the sense of community it inspired has always been a big part of the reason we started On Rotation,” Jacob says. “Lindsay and I feel like we've built a more complete version of that in our new location now that we've added a kitchen and increased our brewing capacity.”

There’s a nod to nostalgia in the cheery, retro decor that can’t quite be pinpointed to one era. Globe lights and other elements echo the round motif in the brewery’s logo. Custom wood tables by Unique Wood Furniture in McKinney fill the main brewery room, and there are four fabulous patio areas, each adorned with the obligatory string lights. (It’s gorgeous at night.)

The bar and counter are the focal points of the room, both for the colorful wall behind it and for the forty shiny taps that pour an ever-changing selection of brews. With an obvious reference to aviation, past and present, this is where your visit to the brewery and craft kitchen begins.

Menu signs reminiscent of airport flight schedule boards list all the fun food, which is a key element in this new iteration of On Rotation. Other boards list the craft beers on offer as well as a selection of red and white wines.

Once you decide on your food and drink, order it at the bar counter and you’ll receive a "boarding pass" table topper sign and find a place to sit at a table, the bar or in one of the patio areas. Runners will bring you your order, whether you’re seated inside or out.

Wonderful food was always a plan for On Rotation’s expansion and move. “By taking our time and working with people who know the food business well, we were able to put together a menu that we feel works with almost any flavor we have on tap,” says Lindsay. “From the very beginning, we never wanted our food to come second, which is why we didn’t open a kitchen in our first location. The menu we’ve put together shows you we were serious about that. The food is an equal part of the experience.” 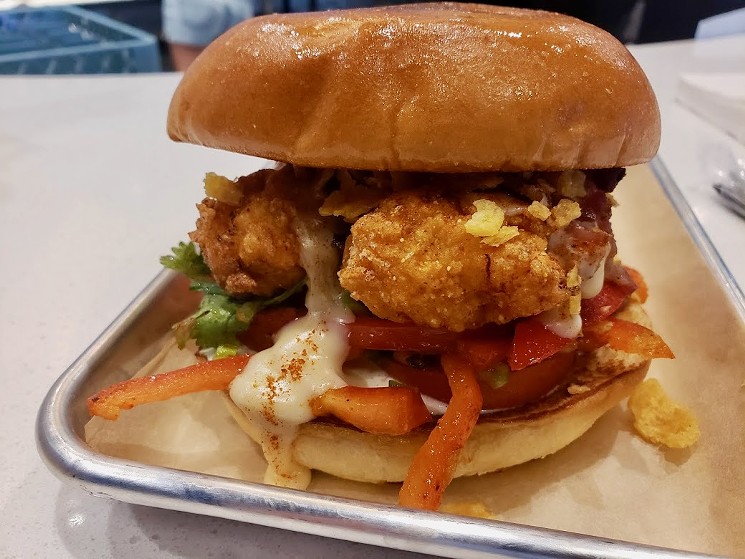 The King Ranch Chicken sandwich at On Rotation
Kristina Rowe
Devin McFarland, who had previous gigs at Sheraton Dallas, Lucia and Top Knot, is leading the program and looks forward to hosting beer dinners with creative pairings in the future. For now, the kitchen is nailing it with chicken-centric menu items that you don’t see everywhere.

Gluten-free fried chicken is crispy and tasty enough to satisfy a fried chicken enthusiast. Pro tip: If you love cold fried chicken, you’re going to want to take home some leftovers or simply order extra for the next day. Sides include mac and cheese, fried okra and Brussels sprouts and almond slaw.

Impeccably crunchy fried tenders are served on their own, on sandwiches or atop a salad. The King Ranch Chicken sandwich consisting of large tenders, a tasty sauce, sliced red peppers, fresh tomatoes and cilantro with a sprinkling of corn chips on top. The large sandwich is served on fresh bread from Empire Baking Co. and is very big on flavor. Several more sandwiches, including a Thai Peanut Sandwich with sweet peanut sauce, are equally as tempting.

A standout from the kitchen; house-made biscuits with peach jam and honey.
Kristina Rowe
Appetizers include bar favorites such as pretzels and stone-ground mustard or beer cheese queso made with On Rotation’s brews. The standout here, though, is probably the house-made biscuits served with peach jam and honey. If you don’t have room for biscuits with your beer, get some to take home for breakfast.

As before, the brewery’s craft beer menu includes an ever-changing assortment of their small-batch craft brews and guest taps, often local or Texas brewers. From the beginning of their journey as homebrewers to the founding of On Rotation and this expansion, the Sloans have been about the joy of discovering a new beer.

Each visit to the taproom can (and likely will) bring something new, including a wide variety of beers to try. On the evening I visited On Rotation beers included their Pilsner With No Name, golden stout Cinnamon Peach Waffle, Imperial Jalapeño Saison and Jump Rye In. Catchy names also describe the beer well, and the menu board lists ABV and IBU for each one along with the price for an 8-ounce pour or a pint.

For now, you can stop by for dinner or beers (or both) and as On Rotation builds its staff, hours will eventually expand to include lunch six days a week.

“We love that the new location makes it easy to meet friends & family for a meal and that it can be a gathering place for people no matter how obsessed they are with a craft beer or how adventurous they want to be,” Jacob says.

Future plans also include curbside service for beer and food, plus events including pairings, collaborations with other brewers and more.

A Grand Opening celebration may be in the works at some point, but the Sloans are in no rush. A careful, planned soft opening and ramp-up were the right way to nurture their new food program and get things off to a good start.

On Rotation Brewery & Kitchen, 7701 Lemmon Ave. (Northwest Dallas)
KEEP THE DALLAS OBSERVER FREE... Since we started the Dallas Observer, it has been defined as the free, independent voice of Dallas, and we'd like to keep it that way. With local media under siege, it's more important than ever for us to rally support behind funding our local journalism. You can help by participating in our "I Support" program, allowing us to keep offering readers access to our incisive coverage of local news, food and culture with no paywalls.
Make a one-time donation today for as little as $1.