First Look: Pizzana, The Concept Born at a Hollywood Party 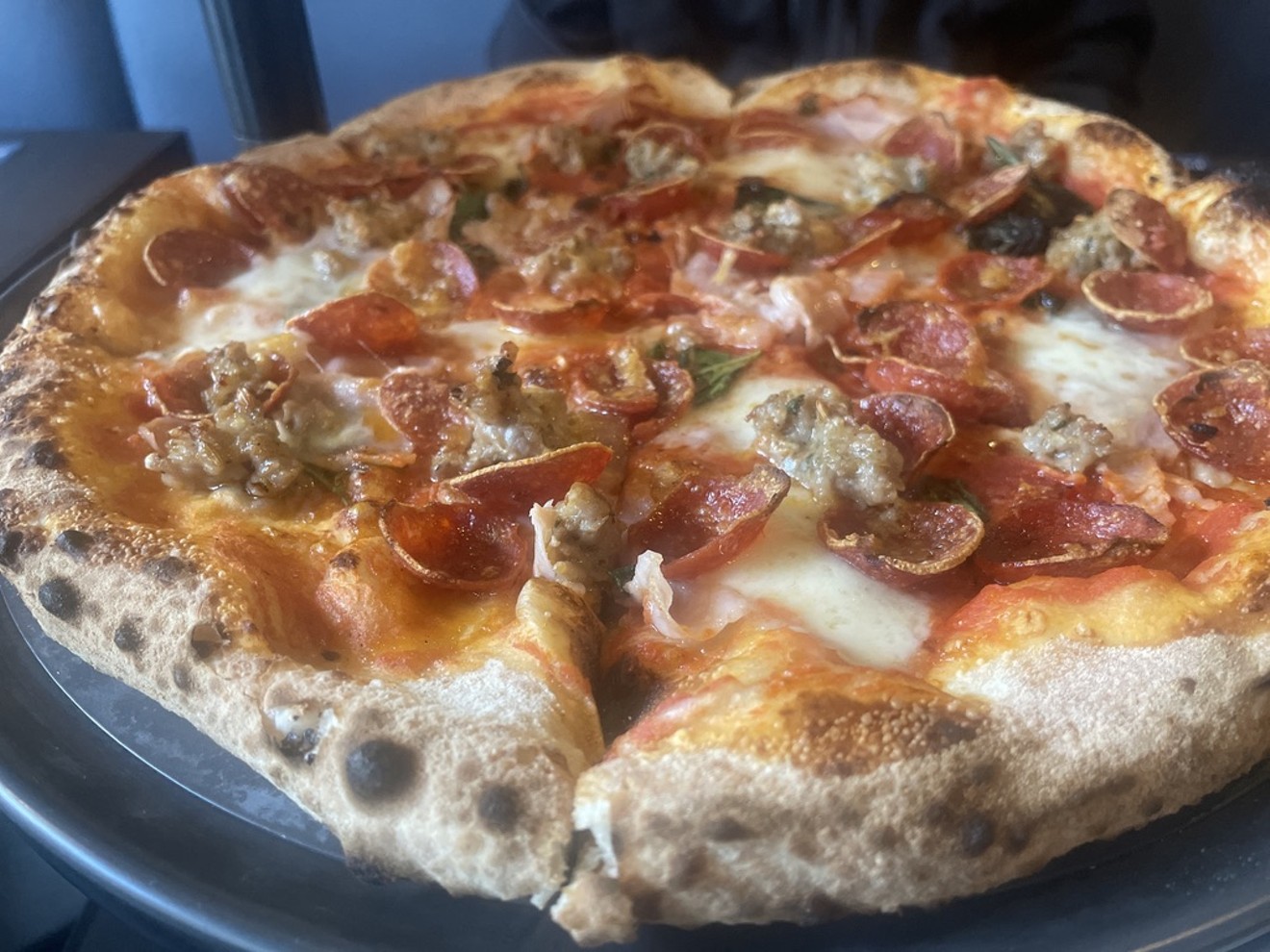 Carnivoro pizza at Pizzana. Angie Quebedeaux
Pizzana, a popular Los Angeles-based pizza joint, has finally landed in Dallas and already has pizza lovers lined up to get their hands on one of these pies. Pizzana was started by Candace and Charles Nelson, founders of Sprinkles Cupcakes in Beverly Hills. They decided to get into the pizza business after attending a party at the home of actor Chris O’Donnell (Scent of a Woman).

O’Donnell met chef Daniele Uditi at a restaurant and hired him for a private pizza party at his home. The Nelsons attended the party and spent most of the night talking to Uditi about his rigorous dough-making process and his desire to have a restaurant someday. Sprinkles Cupcakes had already been sold and there were no plans for Candace to get back into the restaurant business. But after talking to Uditi she knew this was something she had to be a part of.

After launching their first location in April 2017, the two have since expanded to three spots in the Los Angeles area. Their newest restaurant is on Knox Street in Dallas, the first venture outside the Golden State. Since opening in Los Angeles, they have received accolades from the Los Angeles Times, Zagat, Eater, Food & Wine, Thrillist and more.

So, why open a location in Dallas? Because the food scene is hot, and Knox Street has great foot traffic from shoppers and people coming off the Katy Trail after a bike ride or a run.

Uditi’s pizza is described as neo-Neapolitan. The dough is fermented for 48 hours, which gives it true Neapolitan pizza qualities, but with a firm, not floppy, base. And let’s be honest, who doesn’t like for their toppings to stay on their slice of pizza after they take the first bite? 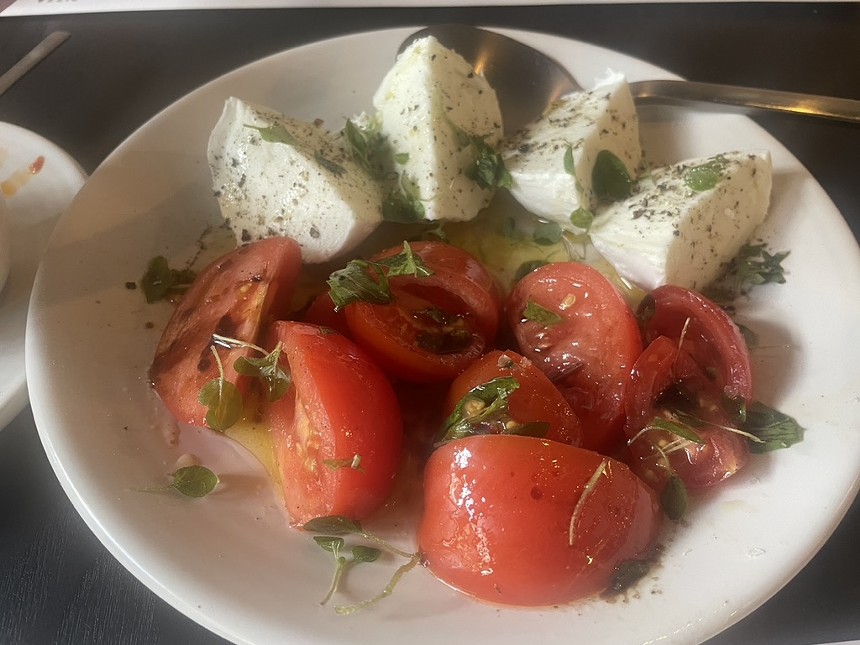 Caprese de buffalo.
Angie Quebedeaux
We started with a Caprese salad, which had gorgeous chunks of fresh heirloom tomatoes and mozzarella tossed with basil, oregano, garlic and olive oil, all refreshingly light and flavorful. Crispy artichoke hearts.
Angie Quebedeaux
The carciofi arrostiti is charred artichoke hearts and crispy baby artichokes mixed with lemon, pine nuts, Parmesan and olive oil, and is a great way to start your meal with plenty to share. 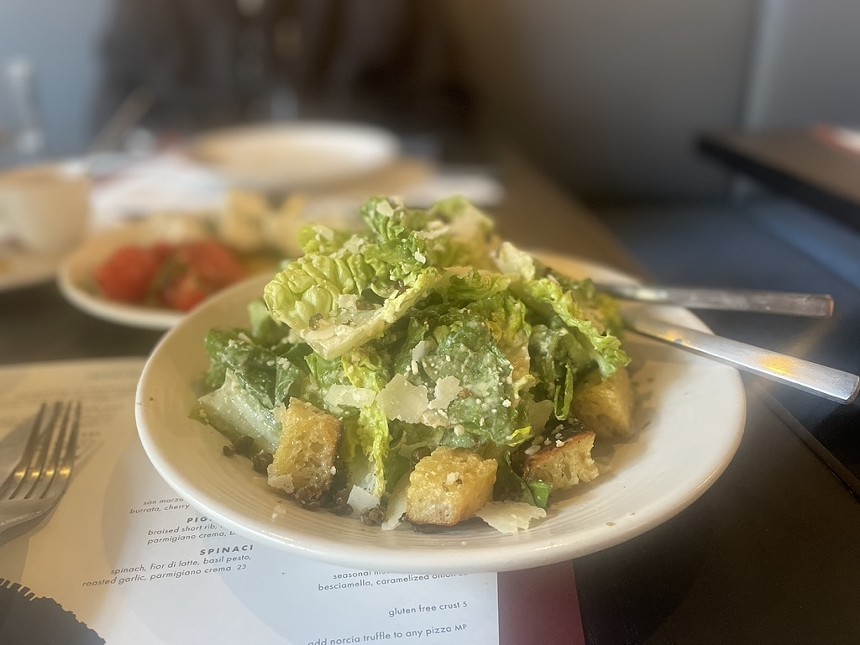 
If you’re in the mood for a salad, the Caesar salad is made with little gem salad tossed with fried capers, Parmesan, pizza crust croutons and a Calabrian chile Caesar dressing. Cacio e Pepe.
Angie Quebedeaux
We had to try the signature pizza – the Cacio e Pepe, which is topped with provoloncino di agerola, fior di latte, parmigiano crema and cracked black pepper. This pizza is a unique and creative twist on the traditional pasta dish. The cracked black pepper brings out the flavors of the cheese. It was firm where it needed to be firm, yet light and airy and cooked to Neapolitan perfection. In fact, it was one of the best things we ate all year.

The Carnivoro (photo at top) is a great option for all meat lovers, topped generously with pepperoni, fennel sausage and prosciutto cotto. Panna cotta at Pizzana.
Angie Quebedeaux
Although pizza is undoubtedly the star of the show at Pizzana, be sure to save room for dessert. We tried the panna cotta topped with a layer of salted caramel, and it was a fantastic combination of both sweet and salty — so light yet rich.

The restaurant seats about 40 people, and each table has custom-made pizza towers to accommodate multiple pizzas. While there is not a designated bar area, there are several craft cocktail options.

Our pizzas took a little longer than expected to come out, but we learned later that one of the pizzas didn’t turn out as good as it was supposed to, so instead of serving it to us and hoping we wouldn’t notice, they remade the pizza to ensure it was done correctly.

A look at Pizzana's social media reveals that the other locations offer special limited-menu pizzas and sandwiches, as well as online ordering. These are not currently offered at the Dallas location, but we hope they will be soon.

Pizzana, 3219 Knox St. Sunday – Thursday, 11:30 a.m. – 10 p.m.; Friday and Saturday, 11:30 a.m. – 11 p.m.
KEEP THE DALLAS OBSERVER FREE... Since we started the Dallas Observer, it has been defined as the free, independent voice of Dallas, and we'd like to keep it that way. With local media under siege, it's more important than ever for us to rally support behind funding our local journalism. You can help by participating in our "I Support" program, allowing us to keep offering readers access to our incisive coverage of local news, food and culture with no paywalls.
Make a one-time donation today for as little as $1.