Alamo Club has temporarily closed because a staff member tested positive for COVID-19. Taylor Adams
Dallas restaurants — or rather all restaurants — are precariously navigating uncharted territory. The National Restaurant Association released some distressing numbers this week: The food service industry is predicted to lose $240 billion by the end of 2020, and more than eight million restaurant workers are unemployed.

All the while, Dallas County reported its third-straight day of more than 300 new cases, and hospitalizations are at their highest number yet at 2,326.

Meanwhile, the state is slowly opening back up for business. Bars across the state are allowed to welcome customers at 50% capacity indoors and full capacity outdoors. Restaurants can have up to 75% of their dining rooms full while adhering to social distancing norms. And the only staffers required to wear a face mask are valet drivers.

This has put restaurants in a vulnerable position, sort of like a hockey team during penalty kill; one man down, running a zone defense, trying not to lose more ground.

Now a new slate of restaurants have closed because employees have tested positive for COVID-19.

On June 9, Royal China posted a Facebook message that after opening at just 50% capacity and closely following guidelines provided by state and federal agencies, one of their kitchen staff tested positive. They temporarily closed.

Jay Jerrier, who owns both Cane Rosso and Zoli’s, is having a particularly bad week. On June 9 they reported that a three-day new hire at their Cane Rosso restaurant in Carrollton tested positive for COVID-19. Then, on June 14, another employee at Zoli’s in Addison tested positive.

In similar statements on both Facebook pages, they announced they will be providing tests for all employees at both restaurants. They also explained that they had required all employees to wear face masks and had implemented strict no-contact procedures. The two restaurants are closed as they assess the situation.

Monday, Alamo Club posted on their Facebook page that they, too, had one of their own test positive. From their Facebook post: “While this person has not been in the restaurant for 10 days, out of an abundance of caution we will temporarily close.”

The Dallas Morning News reported that Al Biernat’s North also had an employee test positive last week, and they are closed through June 18.

Back in mid-March (which seems like a really long time ago), Nick Badovinus was a first restaurateur to have an employee test positive at Town Hearth. He led the way in being transparent on the restaurant's website.

And now, he predicts that more restaurants are going to have to face this at some point.

“It's something most businesses are going to be dealing with, or already have. We were just one of the first,” Badovinus said.

There’s no rule or protocol that requires restaurants to report a positive test, either to the state or through social media. Further, nothing says a restaurant has to shut down to clean.

Badovinus sees it as the way forward, another new norm.

“In fact, we posted to our Vantina site and Insta[gram] last night that we had a positive test there,” Badovinus said. “It's a reality of today's world. It’s incredibly challenging in a number of ways. I do feel there is real value in being upfront and transparent about it.” 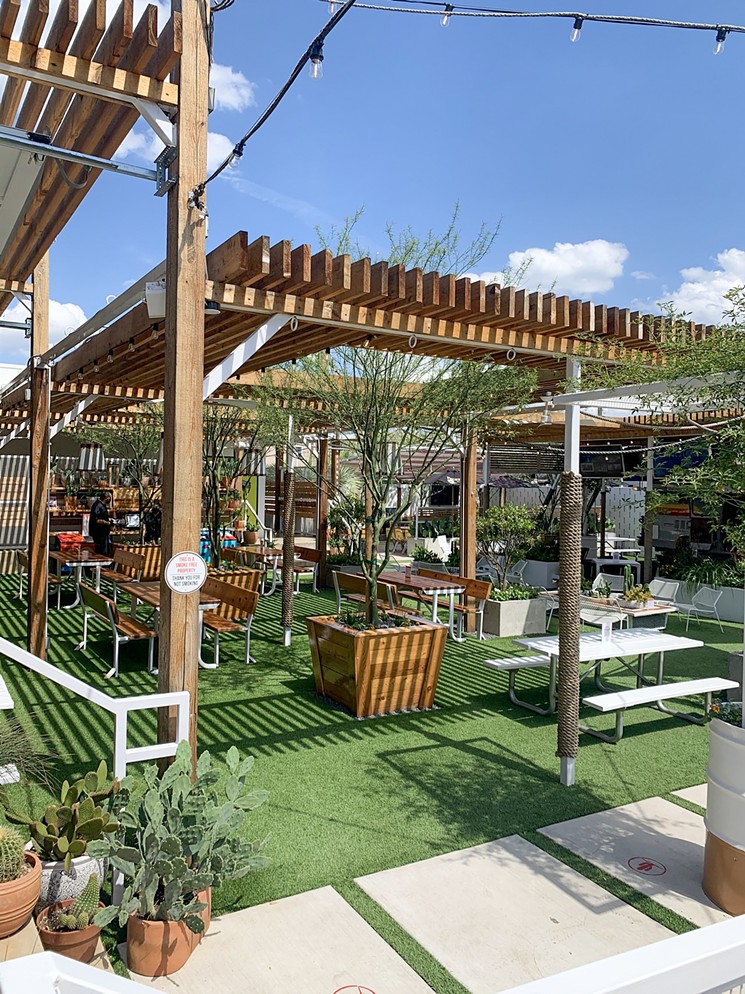 Vantina only recently opened on the patio of Desert Racer on Lowest Greenville.
Nick Rallo
The Vantina website explains they were notified Sunday that one of their team members tested positive and while that employee hadn’t been on site since June 7 and they weren’t showing any symptoms while at work, they’re closing anyway.

“I did, and do, what feels right for our business,” Badovinus said. “I believe our team and our core customer base respects us for that.”

There has been some backlash for restaurants that haven't reported positive cases, such as a Fox News report about two employees at Yolk who contracted the virus. They were bothered management didn't notify customers.

President of the Greater Dallas Restaurant Association, David Denney of Denney Law Group, is getting calls and emails from restaurants regularly now about what to do.

“The people who are open are super nervous,” Denney said. “They have very little revenue, and they're very worried about their employees.”

He explained that one common scenario for a positive test is that the restaurant temporarily shuts down and other employees are tested, which takes three days to get back. In that time, the space is cleaned; electrostatic technology is a popular method.

But Denney remains optimistic, “We were Bon Appetite's 2019 food city of the year. People are going to come back."

When, how and at what rate have yet to be determined.

“My hope is that as we continue to responsibly serve our guests, the dining public will also be responsible with their own behavior and they’ll take responsibility for their own health. Hopefully, customers will continue to go to restaurants and bars and do it responsibly,” Denney said. “If they walk into a place and feel uncomfortable, they should leave and go to another place.

“There are so many people doing it well, there are plenty of choices for people who are looking for a place that's following all the rules,” Denney says.

But, as demonstrated by many restaurants, that simply might not be enough. Cane Rosso had strict policies in place. As did La Calle Doce, which implemented a contactless curbside service and required employees to wear masks, yet an employee in their kitchen tested positive in April.

The human factor is unpredictable. No one can tell a member of their team what to do when they're not at work. Until there's a vaccine, Denney advises restaurants have a plan in place if someone on their staff gets sick.
KEEP THE DALLAS OBSERVER FREE... Since we started the Dallas Observer, it has been defined as the free, independent voice of Dallas, and we'd like to keep it that way. With local media under siege, it's more important than ever for us to rally support behind funding our local journalism. You can help by participating in our "I Support" program, allowing us to keep offering readers access to our incisive coverage of local news, food and culture with no paywalls.
Make a one-time donation today for as little as $1.