2018's Most Hyped New Dallas Restaurant Is an Escapist Fantasy of Gold, Velvet and French Fare 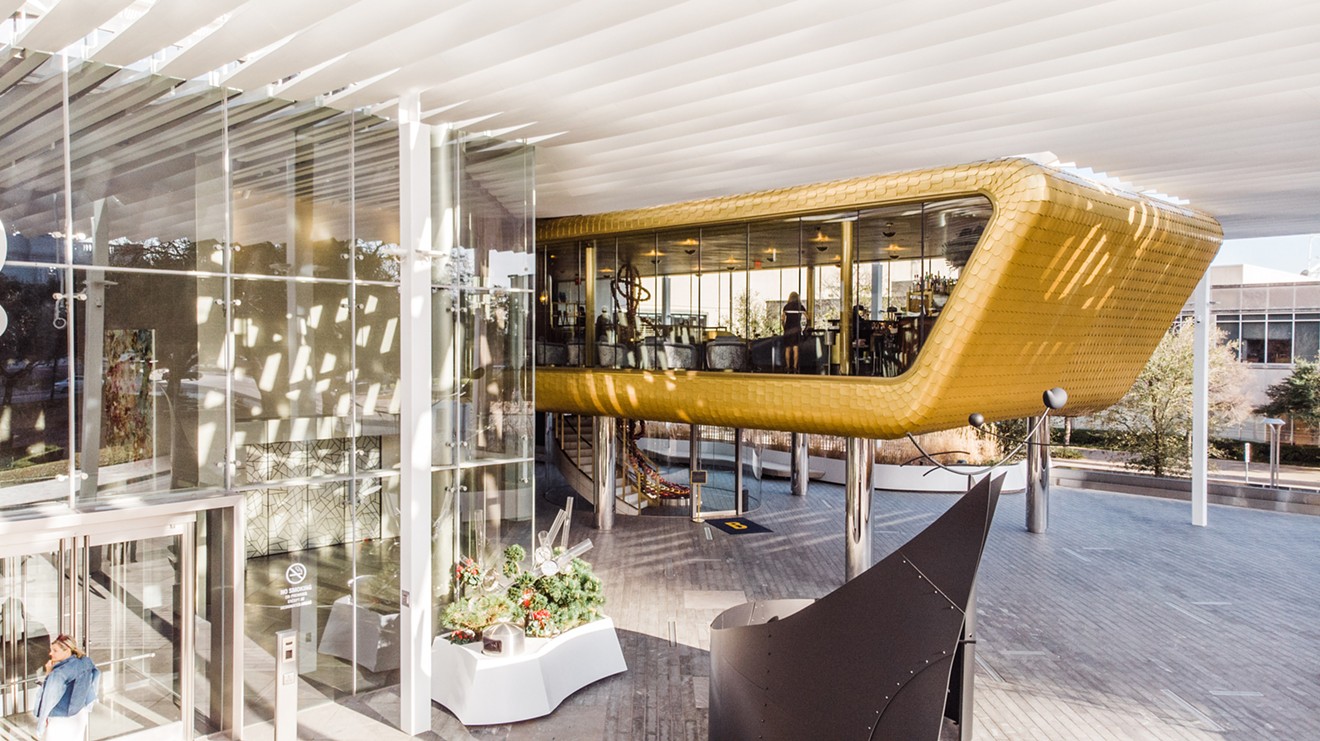 Bullion juts out of 400 Record like a giant gold bar wedged into the building's exterior. Kathy Tran
On the outside of downtown Dallas’ 400 Record Building, a tube of glass ascends from the sidewalk to a dining room perched above. Inside that glass ring, a spiral staircase whisks diners around a sculpture by Jean-Michel Othoniel that resembles a long, glittering necklace.

Entering Bullion is like ascending into an alien spaceship from a luxury galaxy. Inside, these very fabulous aliens operate a French restaurant that aims for elegance without stuffiness, playfulness without gimmickry and a classic feel that doesn’t tip into the reactionary. That’s quite a balancing act, and so far, it mostly works. 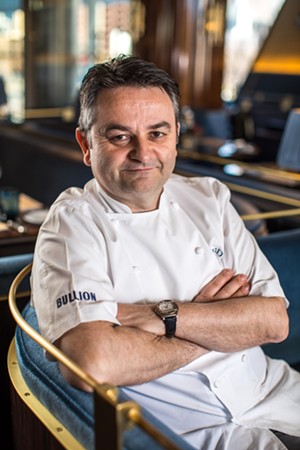 Chef Bruno Davaillon left The Mansion on Turtle Creek two years ago.
Kathy Tran
Bullion comes from the mind of Bruno Davaillon, who departed The Mansion on Turtle Creek two years ago and spent the intervening time building his new restaurant. Davaillon has assembled a starry cast of chefs from around the world, hiring chef de cuisine Carlos Matta from Boston and recruiting another sous chef from Australia. The cuisine is traditional northern French — most of us couldn’t fathom how much butter this place goes through in a night — but although the menu recycles old-fashioned ideas like duck à l'orange, the food is good enough that only the most cynical foodies would waste time debating whether such things are sufficiently trendy.

Davaillon and his team are alert to the innovations of the young generation of rising chefs in France, especially in Paris, where a cohort of iconoclasts, not all of them French-born, advocates for bistronomie, a sort of minimalist, back-to-basics combination of haute cuisine and the farm-to-table movement. Bullion, Davaillon hinted in interviews, would learn from that style, and in some ways it has.

But many of those young Parisian chefs are restricted by rent to tiny kitchens and shoebox-sized dining rooms. Bullion’s defining feature, by contrast, is its money. This restaurant, as presented by the architecture firm Gensler, is a gold bar wedged onto the side of a skyscraper. The entrance might feel like a ramp up to a spaceship, but the facade looks like a docking station where those rich aliens from the casino planet in Star Wars: The Last Jedi could park their cruisers. The interior at Bullion.
Kathy Tran
Inside, the restaurant showcases specially commissioned sculptures by American and French artists, a series of eclectic canvases and the soft glow of acoustic ceiling tiles covered with gold paint. Practically everything seems to be made from mohair velvet, deep blue leather or darkly polished woods, except, of course, for the brass bars that run around the backs of the booths and the equally golden lamps that grace each table.

Some diners will surely be reminded of Mad Men. In The Dallas Morning News, architecture critic Mark Lamster compared the space to “a debauched financier’s yacht.” The plates are tastefully monogrammed with the letter B, the napkins are less tastefully emblazoned with the restaurant’s name in giant type and the menus are, least tastefully of all, about the size of a child’s science-fair poster. 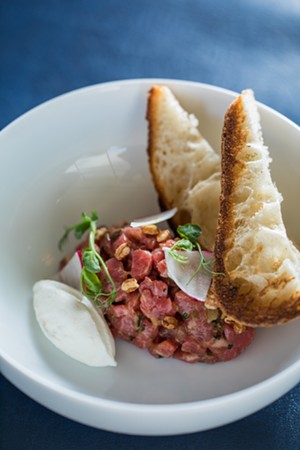 Bullion's steak tartare ($16).
Kathy Tran
If the exterior and interior of Bullion demand attention because of its look-at-me style, the food demands attention for a better reason: It is damn good.

Take steak tartare ($16), a staple of every upscale Dallas restaurant menu since the Ford administration. There is nothing especially innovative about garnishing it with a few thin slices of radish or adding a grain — in this case farro — to give the tartare a satisfying contrast in textures. But smoking cream to create a small dip is a creative twist, and the best part of Bullion’s tartare is the meat itself, diced unusually large to show how confident this kitchen is in the quality of its beef.

Soupe de topinambour is almost as fun to say as it is to eat ($14). This is a cream-of-sunchoke soup, and the delicate flavor of that underrated root vegetable sings in a soup with a texture so velvety and smooth that it’s hard not to keep sipping. The garnish, rather than croutons, is a couple of roasted sunchoke chips. One of the lighter appetizers is a slow-cooked leek dotted with hazelnuts and goat cheese, a classic combination ($12).

For serious seafood lovers, there may be no better reason to go out on a Monday night than Bullion’s quenelle Lyonnaise, a traditional fish dumpling topped with a generous showering of lobster ($28). It’s fishy in the best way, and it’s also old-fashioned in the best way. So is another seafood plate showcasing loup de mer, or sea bass, seared until the skin is as crisp as a chip and served perched over a broth filled with mussels ($30).

The land animals aren’t so bad, either. Lamb sirloin lacks lamb’s usual distinct gamey flavor but is grilled pink from edge to edge and topped with gremolata ($36). The turnips on the side achieve their magic through a two-step cooking process: First, they’re poached in butter, and then they’re pan-roasted and basted in, yes, even more butter.

The scene-stealing red meat is a filet of bison offered Wednesdays only ($36). The cut is fall-apart tender — the steak knife is just a formality — after a long, slow cook. Then, to approximate the rustic pleasures of a bowl of pot au feu stew, it’s surrounded by carrots and root vegetables and topped with a splash of beef broth and a pat of bone marrow. 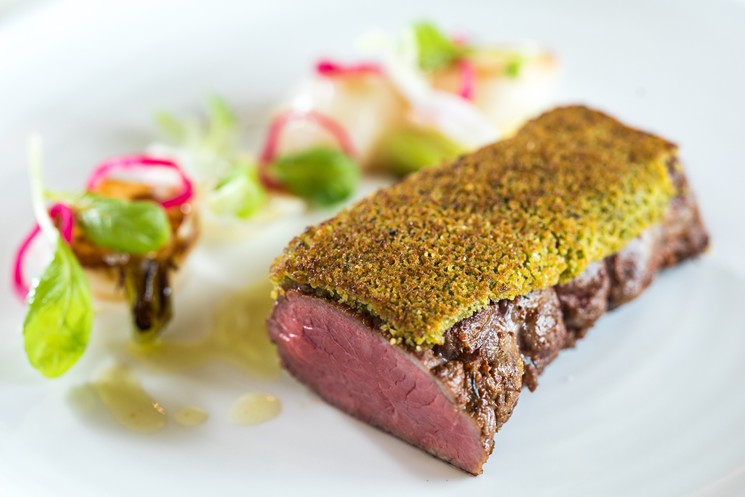 Bullion's lamb sirloin ($36).
Kathy Tran
Not everything was as divine as the bison or quenelles. We weren’t fans of the odd texture of panisse, or fried sticks of chickpea flour ($9), nor of the escargot ravioli ($14), a dish of five ravioli filled with so much bitter pesto and topped with so much garlic that we had to slice the pasta into tiny ribbons to find any identifiable pieces of snail. Gruyere cheese puffs test the boundary between subtlety and plainness ($7). The fries, which come with an excellent tarragon dijonnaise, are divinely crisp on their outsides, but the interiors often hold large pockets of air ($8).

For a restaurant named after gold bars, shaped like a gold bar and topped with a gold-toned ceiling, Bullion has a surprisingly accessible wine list. One night, a sommelier recommended a superb Loire valley white, Domaine des Huards “Romo” 2007, nutty and big-boned from aging but not over the top. It cost just $48. (Unfortunately, it has crept up to $58 since.) There are plenty of big names from Burgundy and Bordeaux, including bottles for more than $1,000, but great care has been taken to make sure that the affordable stuff is good, too. 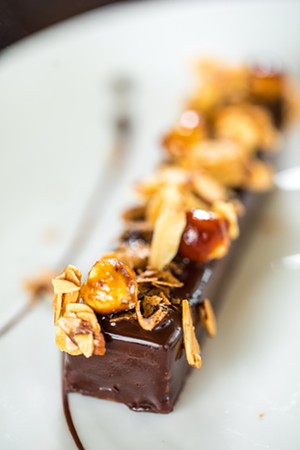 Kathy Tran
Desserts come from chef Ricardo Sanchez, formerly of Flora Street Café. The dark chocolate soufflé with a wintry, gently hot mix of spices is a guaranteed winner ($12), as is a subtle lemon tart topped with fresh grapefruit jam ($10). (On our final visit, staff recognized this author at dessert time, and a basket of madeleines appeared without explanation. We added the full cost to the tip.)

A lot is riding on Bullion. For its owners, the Hartland-Mackie family, the restaurant is intended as a national symbol of their good taste. For Davaillon, it’s a return to Dallas cooking after years away. For some of his subordinates, Bullion was worth moving from other time zones or continents. And some rather overeager Dallas food writers have been heaping burdensome expectations on the restaurant, hoping that Bullion by itself can lead the entire city to international culinary prominence.

It can’t. No lone restaurant can accomplish such a feat, and to demand that of Bullion is unfair. It’s best to reduce expectations to a manageable, practical level, to expect a very good special-occasion restaurant that synthesizes French cooking’s new school with old money. Rather than miracles, expect a combination of good taste and excess and an overall charming, elegant night out.

Once the hype settles down and the early disappointments are resolved, head to 400 Record St., find the glass tube under the gleaming gold bar, open the door and ascend into the spaceship. Bullion is worth the wait.