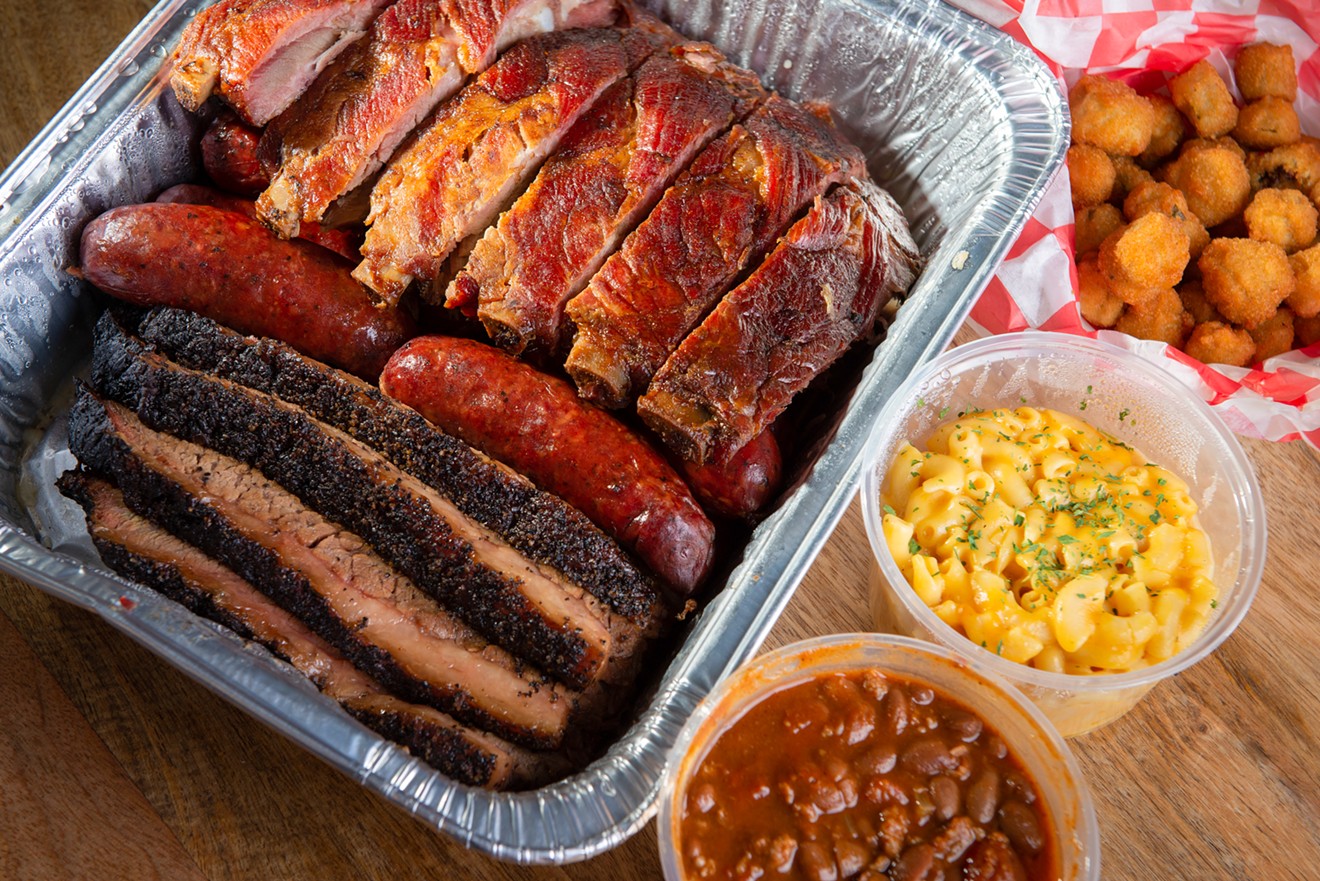 Brisket, sausage links, ribs, macaroni and cheese, beans and fried okra: Smoky Joe's nails the compulsory part of the program. Alison McLean
Even before a global pandemic arrived, this was a year of change at Smokey Joe’s BBQ.

Last spring, after 34 years of takeout-only service, Smokey Joe’s finally opened a dining room. Owner Kris Manning, whose father, Kenneth Manning, co-founded the restaurant with Joe Melton in 1985, hoped some of his longtime regulars would settle down and sit awhile. 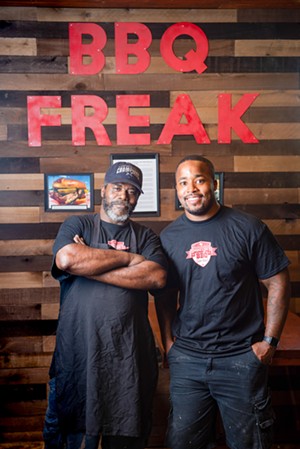 “We’ve been blessed,” Manning says. “To even be open, I’m thankful about that. Our base of our business was already to-go. It does stink not to make the cool platters anymore, but we had a leg up knowing how to do takeout.”

Manning feels blessed for other reasons, too. Dallas authorities rejected his initial plan for a much larger dining room, citing minimum parking requirements. Now that outdoor eating is safer anyway, that change of plans looks like a gift: Manning is preparing a more welcoming patio instead, with shade, added tables and a stereo.

The new ordering software was a big boost, too. By coincidence, the online takeout shop was ready the same day local dining rooms shut down. Orders arrived seamlessly, and a carhop walked boxes of ribs out to waiting customers at the curbside.

“We got it right on time, we got everything set up right before the pandemic,” Manning says. “That was a key thing that made all of this transition really smooth. Crazy how God’s timing works.”

Many of the restaurant’s regulars have been coming here for decades. They’ve followed Smokey Joe’s as it evolved from a takeout window specializing in slabs of smoked ribs to a restaurant that, following Manning’s tastes, dabbles in a variety of Texas barbecue traditions.

Usually, when we talk about a barbecue joint being good “all-around,” we mean it has good beef, pork, chicken and sides. Smokey Joe’s is an all-rounder of a different sort: It’s an all-star assembly of different styles. 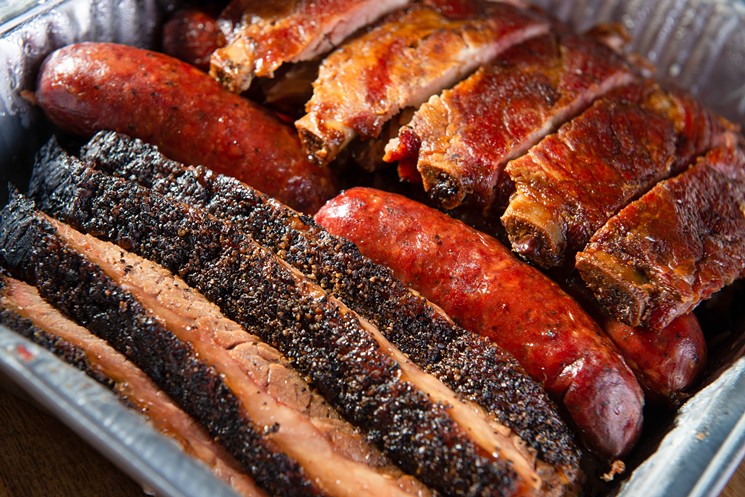 Brisket, sausage and ribs
Alison McLean
The hot links are an East Texas tradition, produced in the small town of Pittsburg. The ribs are a decades-old recipe without a sweet glaze or a black pepper rub, but the sandwiches only debuted a couple of years ago. “Brakes” come straight out of African American barbecue heritage, but Manning’s brisket hails from the German-influenced Central Texas tradition.

“Growing up, I would go to my dad’s restaurant, and I would never go eat at other barbecue places,” Manning says. “Now that’s what I love to do, is go to different barbecue places. My first restaurant I ate at was Terry Black’s in Austin, and that’s when I realized my brisket was terrible.” Here he laughs, hard. “That brisket was something like I had never tasted before. It was amazing. That was the first time I really got intrigued with brisket.”

Manning’s curiosity has become his biggest asset. He’s traveled Texas learning his craft, including a recent stint working hands-on at Guess Family Barbecue in Waco. That’s why Smokey Joe’s feels like a greatest-hits reel of multiple traditions of smoked meat — traditions that are usually seen as rivals.

Inside one Styrofoam box, the hearty ribs on my takeout rib plate ($16) are stacked in two levels, like a red, meaty brick. The minimalist recipe shows off meat, tenderness and technique. The new online ordering system offers a number of sauce customizations: regular or spicy, on the meat or on the side, extra saucy for $1. I get hot sauce on the side; it’s not fiery, but there’s enough pepper in there to be eye-opening when I dunk my fries.

The ribs are old-school and great, but the brisket compares well with barbecue joints 150 miles to the south. I custom-ordered a moist brisket basket ($12) and was rewarded with three cuts of fork-tender meat ribboned with fat. The smoke note isn’t as overwhelming as at, say, Pecan Lodge, and the rub is peppery but not aggressively so. At the same time, the flavor is bolder than the subtle brisket at The Slow Bone. To me, it’s a dreamy bite of meat, a perfect compromise.

The beans are as classical as Texas barbecue beans come, full of ground meat and long-simmered. Grab the GF sandwich, a chopped brisket and pickle standard that gets crunch and excitement from the addition of crisply battered onion rings ($10). Those thick-cut pickles pack a tart punch, and since sauce is on the side, the onion rings don’t soften up on the ride home. 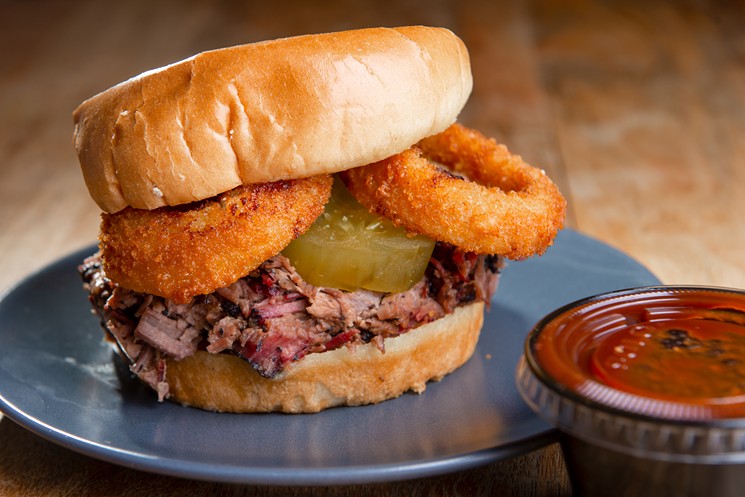 The GF sandwich: Chopped brisket, onion rings, sweet and spicy house-made pickles on a brioche bun, served with barbecue sauce
Alison McLean
A “slice” of pie here ($4) is, in fact, a quarter of the entire pie. Smokey Joe’s buttermilk pie filling is so decadent and moist that when I lifted my “slice” out of the takeout container, the crust immediately fell apart. The pie was so sweet, my teeth started tingling. Sweet potato pie, on the other hand, is perfection.

The dining room is back open at Smokey Joe’s nowadays, and regulars can enjoy four of the six indoor tables. As disheartening as the world may be, Manning remains thankful and optimistic. In fact, the busiest day of his career came this summer, on Juneteenth.

“Some of our biggest days are July 4, Memorial Day, Labor Day,” Manning says. “Juneteenth blew those days out of the water. Blew them out of the park. I took over roughly five or six years ago, and that was the busiest I’ve ever seen it, period.”

He says they smoked at least 200 slabs of ribs that day. Instead of closing when the first batches ran out, the kitchen kept throwing on more meat.

And instead of being cowed by a pandemic, or trapped in a fire-prone old barbecue pit, Smokey Joe’s keeps growing and keeps getting better.

Smokey Joe’s BBQ, 6403 S. R.L. Thorton Freeway (Wolf Creek), 214-371-8081, smokeyjoesbbqdallas. Open 11 a.m. to 9 p.m. Tuesday through Saturday and 11 a.m. to 5 p.m. Sunday.
KEEP THE DALLAS OBSERVER FREE... Since we started the Dallas Observer, it has been defined as the free, independent voice of Dallas, and we'd like to keep it that way. With local media under siege, it's more important than ever for us to rally support behind funding our local journalism. You can help by participating in our "I Support" program, allowing us to keep offering readers access to our incisive coverage of local news, food and culture with no paywalls.
Make a one-time donation today for as little as $1.