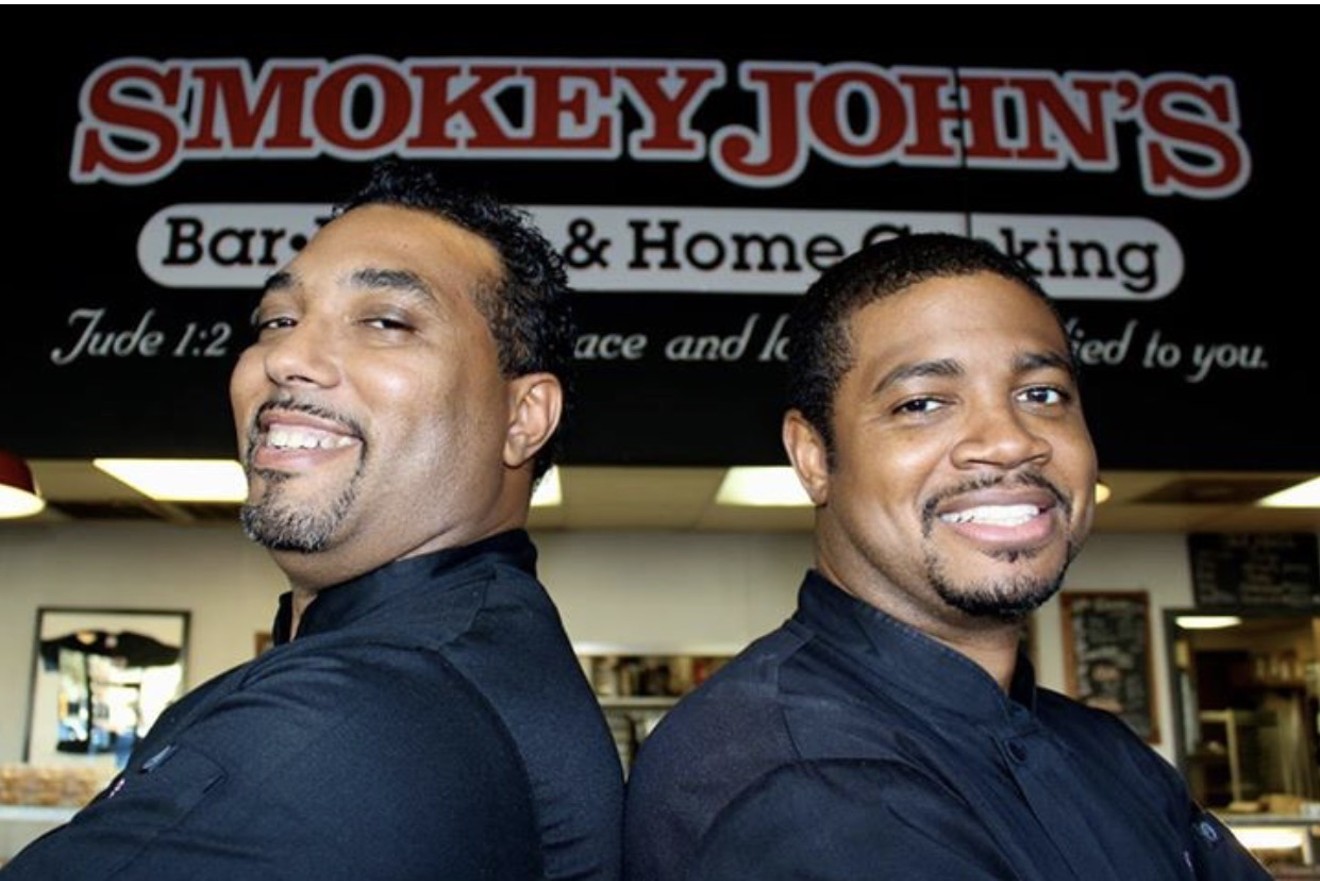 Those were the three words Brent Reaves used to describe the way he felt when his family business — Smokey John’s BBQ — went up in smoke. On Sept. 9, the barbecue joint at 1820 W. Mockingbird Lane caught fire. Brent’s brother and co-owner, Juan Reaves, remembers the moment he found out like it was yesterday.

A piece of wood lodged under a grease pan led to the fire that closed Smokey John's in September.
courtesy Smokey John's BBQ
“I left at 4:50 p.m. There was no fire when I left,” Brent says.

He was on the way to Sherman for a catering delivery. After dropping his wife off at a nail salon, Brent got a funny feeling he needed to stop by the restaurant.

That’s when Juan got a call from an employee — the restaurant was on fire. He didn’t think it was serious. But Brent soon discovered it was.

“I pull up at 5:08 p.m. Three fire engines are there, and they are hustling to try and put the fire out,” Brent says.

A piece of wood lodged under a grease pan started the fire, and the damage was immense.

“You walk into that building that you’ve been walking into for 18 years, and all your stuff is burnt up. It’s a gut punch,” Brent says.

But once the smoke cleared, so did the Reaves brothers’ vision for the restaurant’s next steps.

“This is our chance to get it right, to fix it,” Juan says. “To rebuild. To move. For a few weeks — if not months — we really thought we were going to have to move.”

But they didn’t have to, and they realized the opportunity to re-sign their lease meant an opportunity for change.

Smokey John's famous smoked wings.
courtesy Smokey John's BBQ
“Our focal point in the redesign is efficiency, from the way we produce the food to the customer experience,” Juan says.

Smokey John’s BBQ is slated to reopen in late July, but the barbecue brothers are itching to make a return. That’s what they plan to do at this year’s inaugural Taste of Oak Cliff from noon to 9 p.m. Saturday at the intersection of Beckley Avenue and 10th Street. The event will showcase more than 60 vendors, including restaurants, artists, breweries and bakeries.

For the Reaves brothers, doing the fest — even without a restaurant right now — was a no-brainer.

Smokey John's loaded baked potato.
courtesy Smokey John's BBQ
“That’s my hood, for real," Brent says. "We grew up there. We had a restaurant in Oak Cliff."

“The best part about what we do is interacting with our customers," Juan says. "The Taste of Oak Cliff is giving us the opportunity to say, ‘Hey, you’ve been missing us? Here’s your chance.'"

The event is free, but anyone who wants to drink alcohol need a $5 wristband.

KEEP THE DALLAS OBSERVER FREE... Since we started the Dallas Observer, it has been defined as the free, independent voice of Dallas, and we'd like to keep it that way. With local media under siege, it's more important than ever for us to rally support behind funding our local journalism. You can help by participating in our "I Support" program, allowing us to keep offering readers access to our incisive coverage of local news, food and culture with no paywalls.
Make a one-time donation today for as little as $1.
Dalila Thomas
Contact: Dalila Thomas